Postcards From The Pond 1 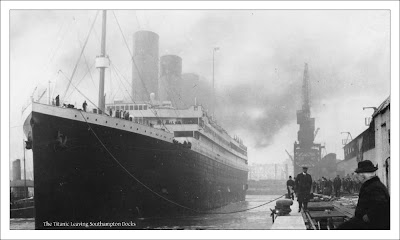 It is Saturday morning and we are somewhere near the northern edge of what my friend Mark called “The Bay Of Biscuits” (AKA The Bay of Biscay). Just had my usual early voyage quest to find somewhere quiet to sit and write. The first corner of a public room I identified turned out to be a Line Dancing Class, whilst the peace and quiet of my second location was quickly disturbed by the roar of lions and the eerie cry of the jackal (I later discovered that I had unknowingly joined a public lecture on big game hunting in Africa). I am now sat in what looks like a Spanish restaurant, but the waiter has quickly learnt to give me a wide berth.

We sailed out of Southampton at 4.00pm yesterday. I was able to tell my travelling companions (Harry (H), Elaine (E), and the Good Lady Wife (GLW)) that we were departing from the very same terminal that the Titanic left from 99 years ago, but the news wasn’t greeted with universal joy. H countered with selected stories of suicides he had investigated in his years as a police officer which cheered the party up no end. As we sailed away from Southampton a military band played Rule Britannia and I scanned the horizon in search of Mayflower Park, from the vantage point of which, blogger Martin H had promised to wave me a fond farewell. I waved with great energy but later discovered that my friendly adieu was directed at nothing more than the Southampton Container Terminal and Cold Storage depot.

A slight cloud was cast over proceedings on the first night when the GLW ate far too much at dinner and had to take to an early bed. The rest of us didn’t let this spoil our enjoyment and I attempted to counteract the GLW’s over-eating by over-drinking. The result was a long and restful sleep during which my bed was gently rocked by a bevy of dusky mermaids. I woke this morning to what the captain describes as a “fresh breeze” and tiny wavelets of no more than six foot high. But the GLW is on her feet again and, along with H and E, has gone to a lecture on nautical knots or some such things. I need to make a serious start on Chapter 2 of the Great Novella of the Twenty First Century (GNTFC) and will do so as soon as I can avoid the waiter who is now approaching me with a dish of paella.