Postcards From The Pond 2 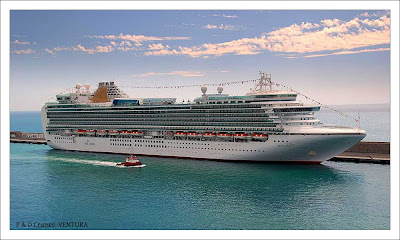 We are beginning to get used to this monolithic vessel that will be our home for the next few weeks, finding our way through the various public rooms, restaurants, bars and theatres, and - with the help of a pint or two of Moorland’s Speckled Hen - finding our way back to our cabin at night. The days are beginning to take on a routine which sees the GLW and myself waking up at about 8.30 and meeting H and E for breakfast about an hour later. For H and E the meal would be more appropriately called Brunch, for H will have already been speed-walking around the promenade deck for an hour or more followed by a visit to the gym. E will have been dusting her cabin or undertaking some recreational ironing.

After breakfast E and the GLW hit the shops or go to some cookery demonstration (I left them this morning heading for a talk by the chef Marco Pierre White) whilst H patrols the boat looking for malefactors (it’s the ex policeman in him). I head for my cabin and try and churn out my target of a 1,000 words a day. By early afternoon targets have either been hit or missed and I can concentrate on the serious business of drinking, snoozing and watching the world float by.

Last night at dinner we got around to talking about lying and ones’ ability to spot a lie when it is told. In order to test out H’s professional ability I told him that during our next days’ dinner conversation I would introduce at some stage an outright lie and it is his challenge to spot it. I will report back on the success of the experiment when I next write - if I am not locked up in the on-board prison cell, that is.

Enough chit-chat for now, I have my 1,000 word target to meet. Until my next postcard from the pond, warmest regards to all.
AB