History Through A Pint Glass : The Huddersfield Georges 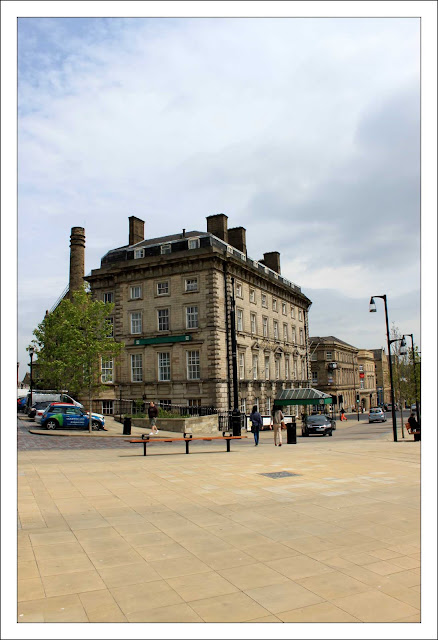 Wednesday 1st June 2011 12.15pm
So here I sit in the Founder's Bar of the George Hotel in Huddersfield. The founders in question, I imagine, are the founders of the sport of Rugby League, as it was in this hotel that the professional game was invented in 1895. Another clue is that the wall is covered with pictures and memorabilia of rugby players, rugby teams and rugby balls. No doubt those original 19th century founders would feel slightly out of place in this modern brass and glass bourgeois palace. No doubt they would have been slightly upset to discover that there were no real ales, no polished beer pumps, no pies and no peas. A uniform row of nozzles serve what little selection there is : you can have Canadian Carling, Dutch Grolsch, Irish Caffreys or something that is hidden behind a curiously incongruous bowl of fruit which has been placed on the bar. Whatever you may choose it matters little as I half suspect that they all can trace their origins back to the same industrial park in Leicestershire, or some such place, where they were brewed together with the same proximity as they are today served together. 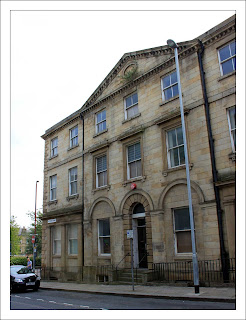 But I digress. What brought me here was a search for the Huddersfield George's. As far as I can make out, the centre of Huddersfield had three Georges : the Old George Inn, the George Inn, and the George Hotel. Of the three, only the latter is still in business, and it is there that I am sitting.However, it seems that the building which originally housed the Old George is still in existence. Sort of. It has moved. It didn't accomplish this feat unaided, nor did it stagger to it's new location after a surfeit of pale ale on a Saturday night. When the railway finally made it to Huddersfield in 1847, the unfortunate Old George was a little in the way.  This was particularly vexing as the Old George had been rebuilt with some style less than sixty years earlier and the locals were quite proud of the building which now stood in the way of both progress and the Lancashire and Yorkshire Railway.  Therefore the good citizens of the borough - showing a zeal for conservation which would have put many of their descendants to shame - pulled it down, stone by stone, and moved it a few hundred yards to St Peters Street. The building is still there, housing a collection of shabby offices : a rather grand Victorian building which is now somewhat tired and emotional.  The old pub out of the way, they built their grand station, erected their smart new George Hotel, and provided glass after glass of fizzy lager for generations to come.
Just a shame that when they moved the Old George they took the real ale pumps with them.
at June 01, 2011