Kids these days! They're surgically attached to their mobile phones. Never off them. You can't have a good old fashioned conversation with them any more, because they are glued to their phones. Now, when I was a lad ...... 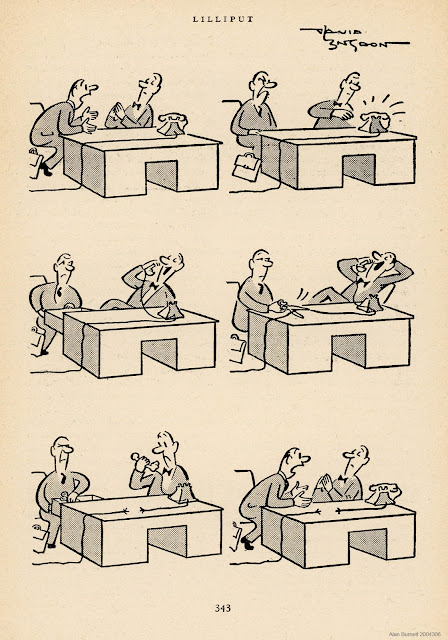 I received through the post today, a copy of Lilliput Magazine from October 1947 (has anyone else noted that postal deliveries are slower than normal these days!). Within it, is this wonderful cartoon that sums the telephone situation up perfectly. 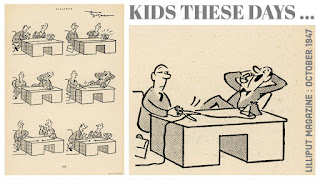 Message To My Wife 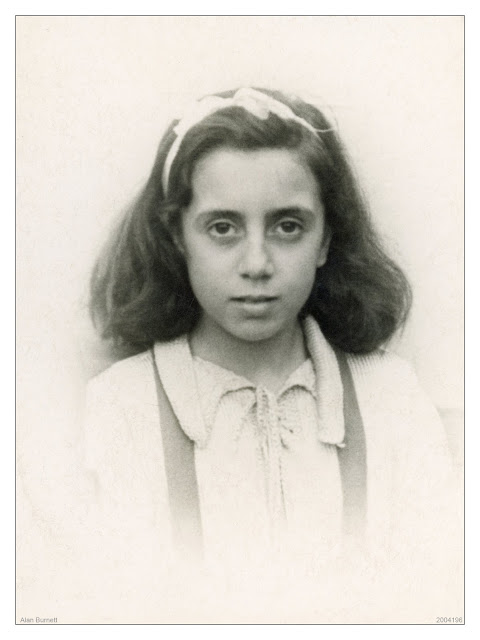 At first I thought that this was one of the hundreds of lost and abandoned old photographs that I provide a home for. They live in boxes and cases, they hang in filing cabinets and folders; they create a hazard to anyone trying to navigate their way through my office. Every so often I reach into one of the boxes and pull a photograph out, scan it, and then file it away with a title such as "Unknown Girl No 573".


But with this one, something stopped me and it wasn't just the quality of the picture and the eye-catching look. I suddenly saw my wife of 47 years. Clearly it is not actually her, but the resemblance is sufficient to make me think it might be a close relative. It wouldn't be the first time such relatives had turned up in one of my lost and abandoned files. Rather than dash downstairs to see if she recognises the person in the photograph, I shall leave it here for her to discover when she looks at my blog later. So message to my wife: who is it?

The Day Of The Parade 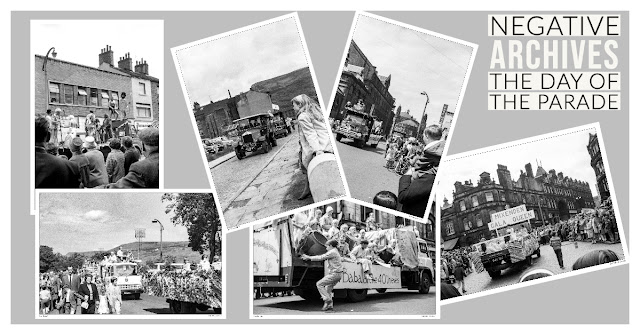 We all have different ways of occupying ourselves during the Great Lockdown; things we can do that will take our minds off the challenges and dangers that lurk outside the confines of our own houses. As will be obvious to anyone who visits these pages on a regular basis, my own particular approach is to dive deep into my photographic archives and rediscover the places and people of several decades ago.


Back in the 1960s, 70s and 80s I would process my own monochrome films and, after developing, cut them into strips for easy storage. 35mm films would be cut into strips of 6; medium format films would be cut into strips of 3. Perhaps they were once filed in some logical order - strips from the same film next to each other - but any such order has been lost over decades of moving house and changing filing cabinets. The only context that remains is the context of the single strip - it is a fair assumption that neighbouring shots were taken around the same time and place.


The strip of negatives I am working on at the moment features shots taken during the parade at the annual Halifax Charity Gala. The date, I suspect, was the summer of 1967. I was on the point of leaving school and starting a job as a press photographer on the local newspaper. I was out to get some practice in before the start of my working life. I followed the Charity Gala parade as it made its way through the streets of Halifax to its destination in a local park. As I took the photographs, I assumed that my occupational destination would be as certain as that of the parade; but I was very much mistaken. That, however, is another story.

Over the next few days I will add the rescanned photographs from this strip of negatives as I process them, and as I progress through the day of the parade. 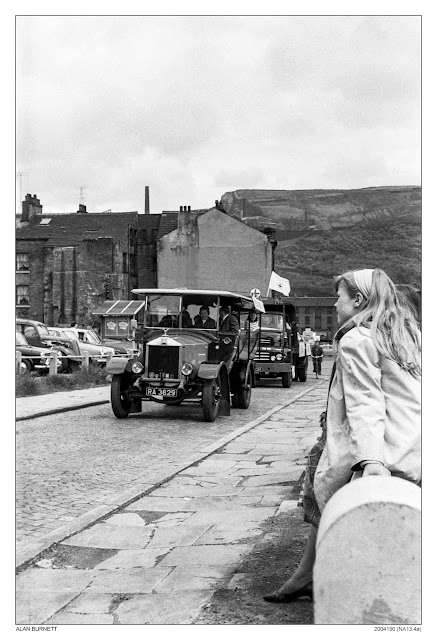 THE START OF THE PARADE :
The parade started in the streets below Woolshops. Clustered around the Parish Church, these streets were once the centre of the town, but by the late 1960s they had become the home of demolished mills and cindered car parks. 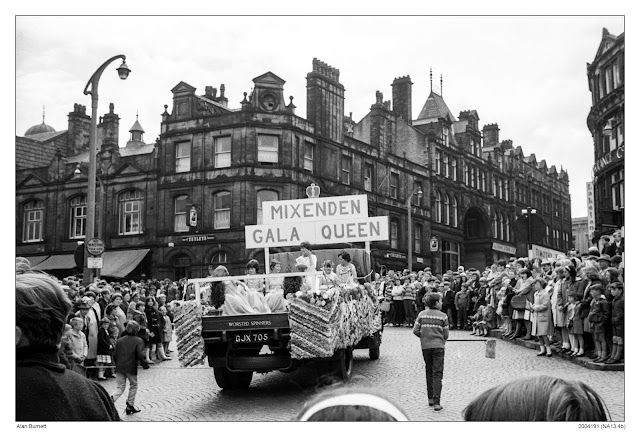 SADDLE SORE :
The parade moves on to the top of Woolshops, and if you can divert your eyes for a moment from the Mixenden Gala Queen, you will see the splendid Saddle Hotel at the corner of corner of Russel Street and Market Street in the background. The demolition of this fine building and its replacement with the concrete monstrosity that is there today must be one of the greatest architectural crimes ever committed in Halifax. 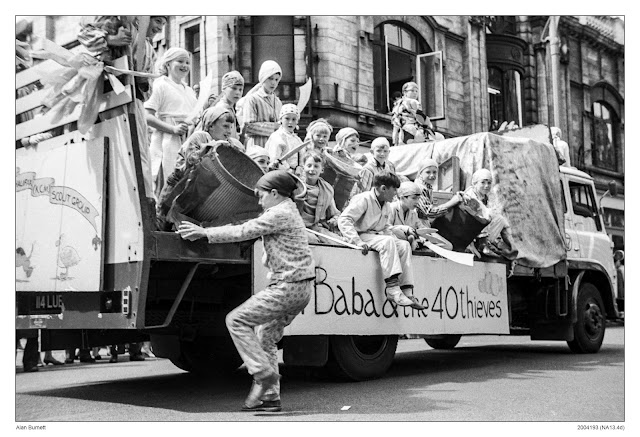 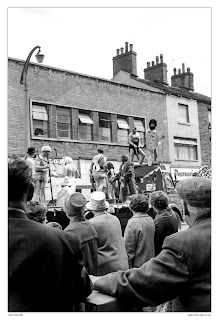 TRAMPS AND THIEVES :
The floats wind their way through the centre of Halifax, and half-familiar buildings provide a backdrop to a series of animated displays. The subjects reflect the cultural hotpot that was the middle of the twentieth century: some look back at familiar nursery rhymes, some look forward to the television shows that were increasingly dominating our lives. 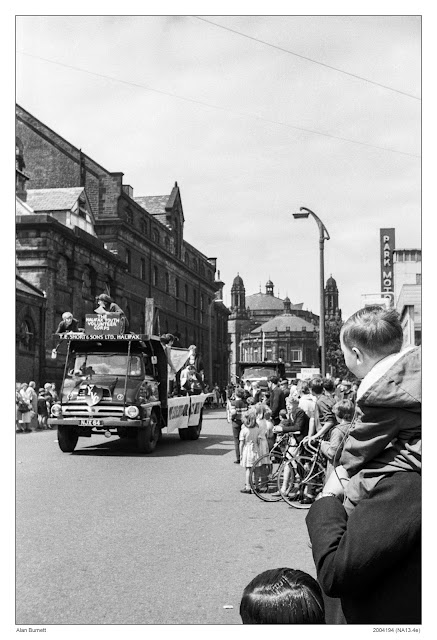 THE HOLY TRINITY :
All civilisations have their sacred troikas, whether they be Father, Son and Holy Ghost or Lenin, Trotsky and Stalin. For a lad growing up in Halifax in the mid sixties it had to be the three brewers: Websters, Whitakers and Ramsdens. Here, the parade passes Ramsdens Stone Trough Brewery just months before it was demolished to make way for that new twentieth century temple - a bank headquarters. 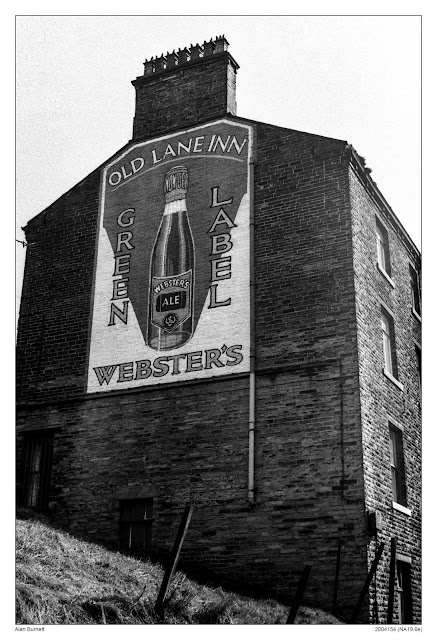 The last photo from this strip of six negatives focuses on something which was just visible in the previous image: the monumental end wall of the Old Lane Inn. There must be collective memories out there about this Halifax pub, but the written record is limited to the sad listing of the bankruptcies and liquidations of previous landlords. The oversized bottle of Green Label marks the spot where many a dream has turned sour. 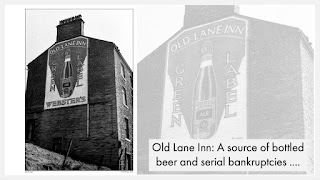 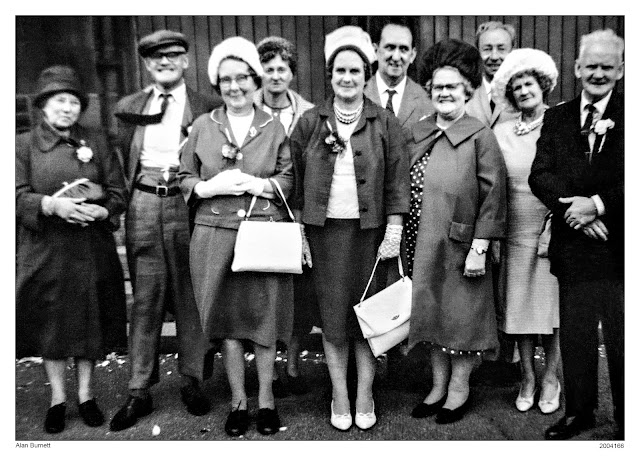 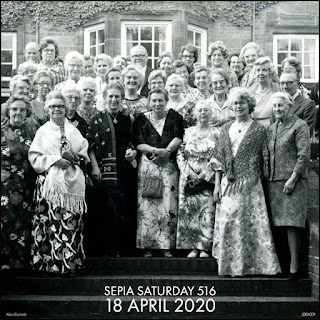 "Bags, caps, hats and wedding smiles: all lined up for the photograph - what a picture!"


This week our Sepia Saturday theme image shows a group of highly decorative women (and a clutch-bag full of equally decorative men) stood attentively for a photography. Groups and photographs go together like .... well, horses and carriages and occasionally lovers and marriages.


My features group of strange and wonderous people is my family; pictured at the wedding ceremony of my brother, Roger, in 1964. For the sake of posterity, let me name names: from the left, Cousin Ada, Uncle John, Aunty Amy, Aunty Doris, my mother, Uncle Frank, Aunty Miriam, Uncle Harry, Aunty Annie, and, finally, my father. A finer collection of bags, caps, hats and wedding-smiles you could never find.

Between Smoke And Soot

There was a greyness about Halifax back in those days: fifty or more shades between smoke and soot. But it was honest, hard-worked muck - nowt to be ashamed of. 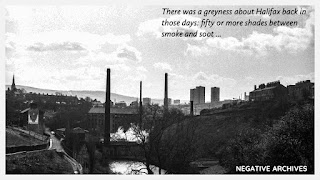 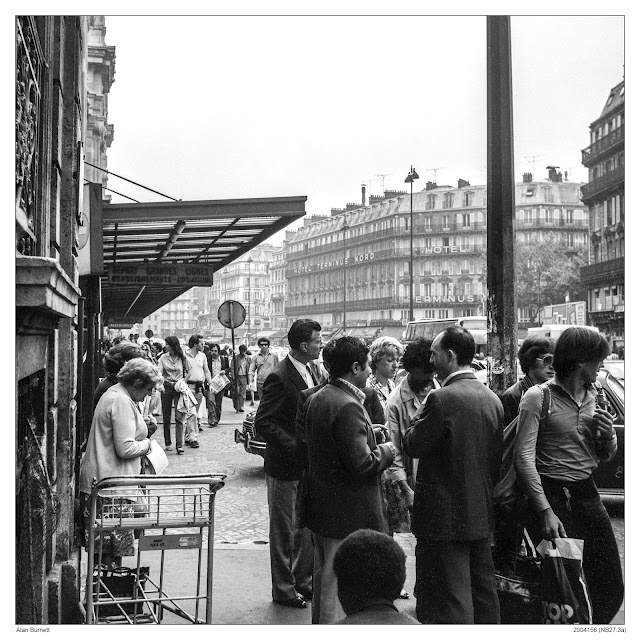 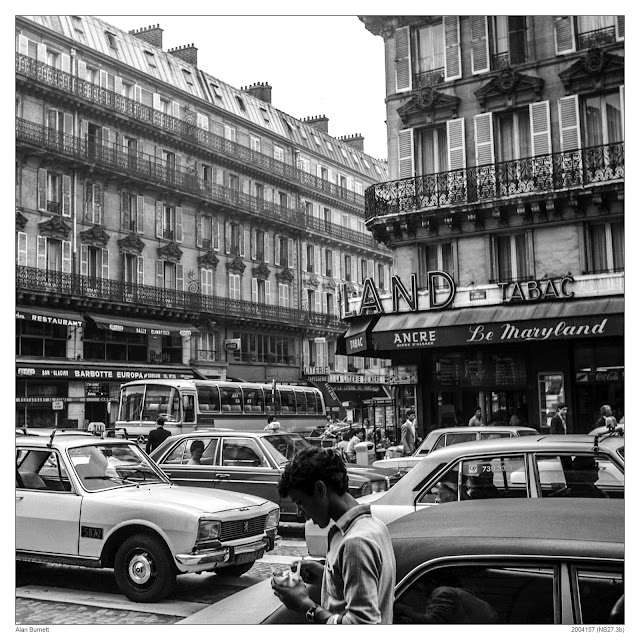 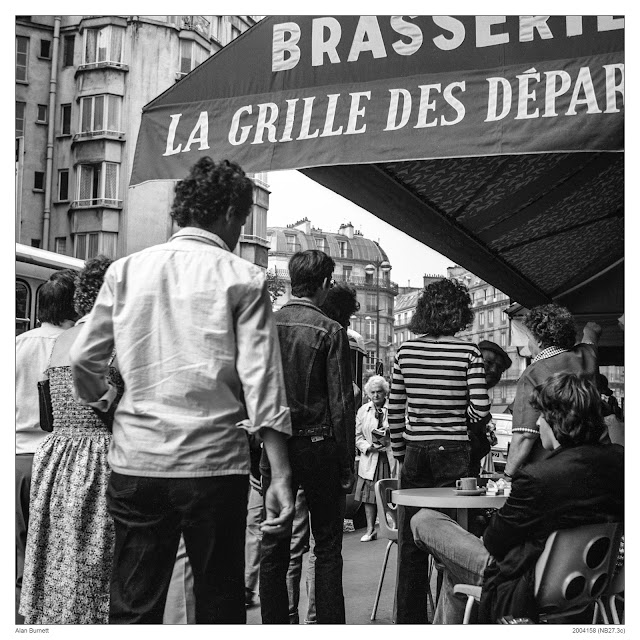 In this strange, modern world in which we live, we travel vicariously: in our minds and in our memories. My particular means of transport is my collection of negatives: photographs I too fifty or so years ago. They not only remind me of a time in my life, but also of people, crowds, cars, noise: the very stuff of life as it used to be lived. Until the next time. 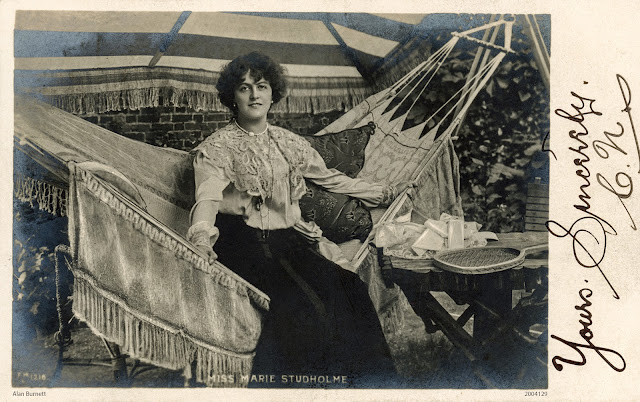 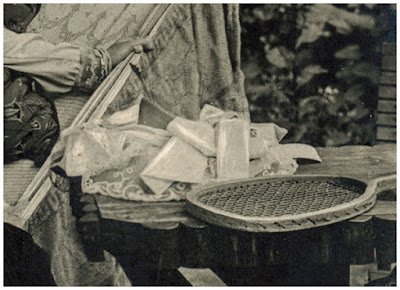 This is a rather strange picture postcard featuring the Victorian and Edwardian entertainer, Marie Studholme. The photograph is fetching enough: she sits suspended in a hammock next to a table bearing a tennis racket. The table, however, also contains a basket full f some strange unidentified objects that look rather like a cross between a modern polythene-wrapped sandwich and a folded pocket handkerchief.

The photograph is signed CN, which is clearly not Marie Studholme herself. Marie - who was one of the original Gaiety Girls and a noted animal lover - was renowned for charging sixpence each time she signed postcards, and gave the proceeds to an animal charity. One can only assume that whoever sent this card to Miss Pattison was no great supporter of such charities. 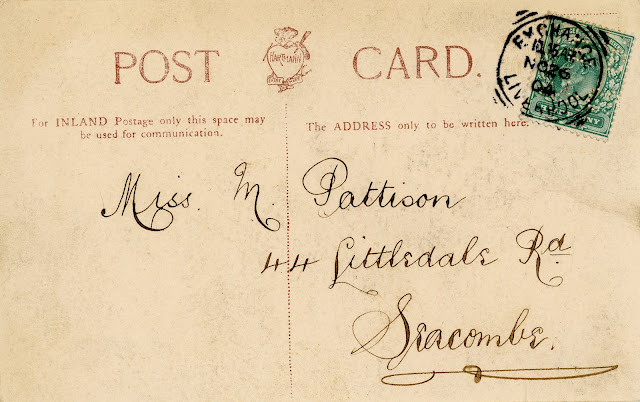 The expansive address field clearly indicates that no message was required.
at April 12, 2020 No comments:

Lockdown Gallery 1 : The Root Of The Problem 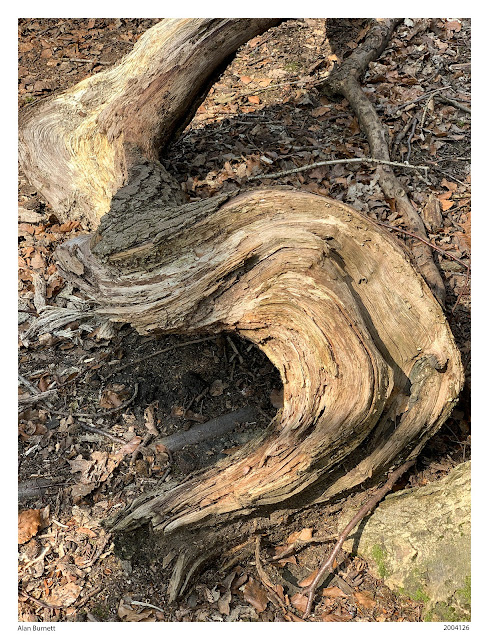 Hand Still Improving In The Land Of Possibilities 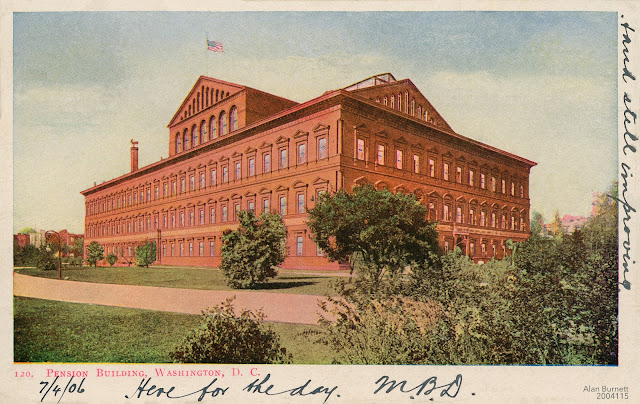 A moment in history captured by a cheap picture postcard. It is April 1906 and MBD is in Washington DC. He - or could it be, she - is there for the day: and that can mean either Washington or, more specifically, the Pensions Building. The building is a grand affair, built in the mid 1880s to serve the needs of Union veterans after the American Civil War. The message says, "Hand Still Improving", and it was sent to J Hemmings Esq, Nobel House, Scotland. Nobel House was the Scottish headquarters of Nobel's Explosive Company and was situated on West George Street. 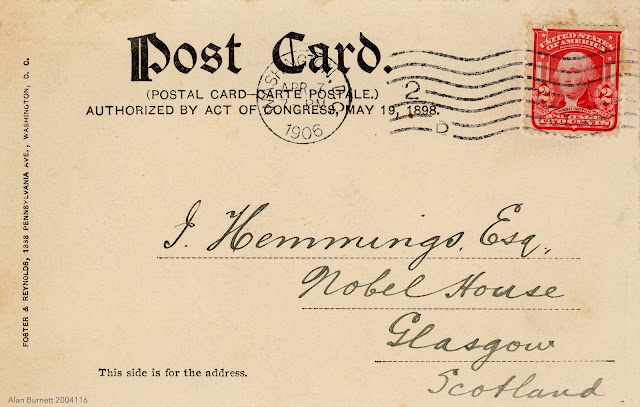 When you have nothing better to do, you can let your mind explore the land of possibilities. MBD, in a fetching kilt, wandering around the battlefields of the Civil War with his travelling salesman's suitcase full of samples of explosives. A missed footing, a stumble, a small explosion, a damaged hand: and a thirty-year old pension claim? More likely, a Victorian tourist doing the rounds of the sights of Washington. More likely, but less engaging.
at April 09, 2020 No comments: 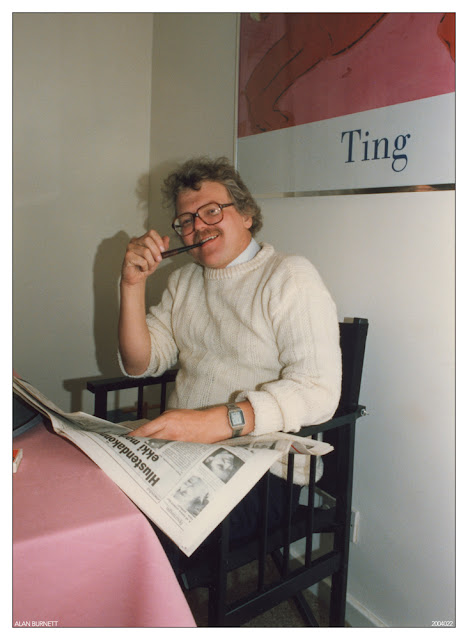 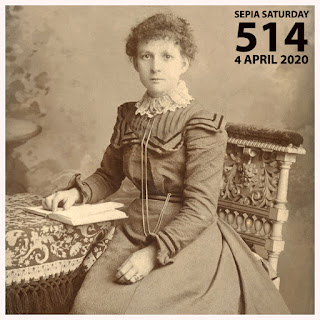 To try and come up with a match for this week's Sepia Saturday theme image, I decided to work my way through a box of unsorted old photographs and post the first one I came across which featured anyone reading. By chance, the first reader I found was myself - in a photograph that doesn't in itself look all that old, but in fact was taken thirty-five years ago. Also by chance, the pose is not unlike the pose of the woman in the theme photograph: a picture that must predate mine by probably ninety years. The eagle-eyed viewer might spot that I am attempting to read a foreign newspaper: it is in fact an Icelandic paper. The photograph, however, was taken in Sheffield, at the home of Icelandic friends. A good match, even if only by chance.