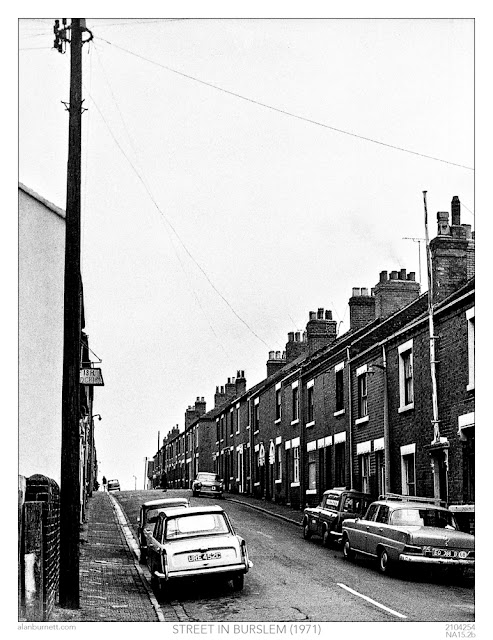 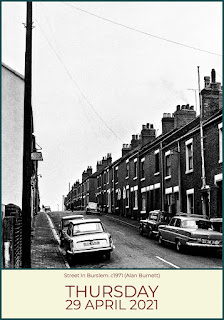 One can't avoid being impressed by how well Artificial Intelligence (AI) copes with the automated colourisation of old black and white photographs. Take, for example, this photograph of a back street in Burslem, North Staffordshire, which I took in the early 1970s when I was living in that part of the world. The negative was stored in my archives shoulder to silver-salted shoulder with dozens of other negatives, mostly of the streets of West Yorkshire. That clever little artificial intelligence, however, decided that the houses of Burslem would have been built from brick rather than Yorkshire stone, and coloured them red instead of mucky brown. What a clever little AI! It's just a pity that it had to spoil itself by showing off and painting the road green. 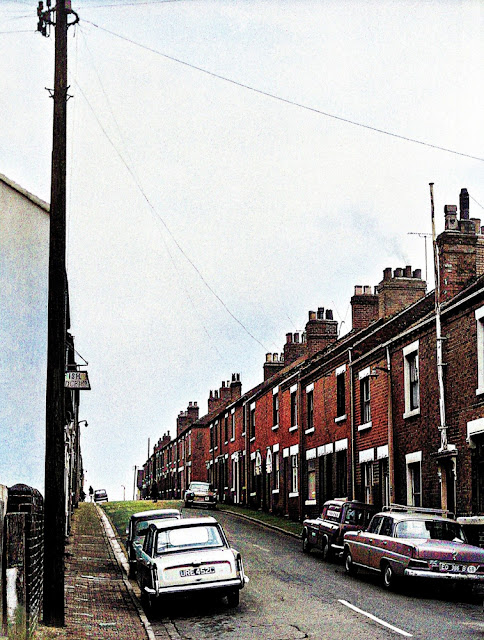 A Study In Greys 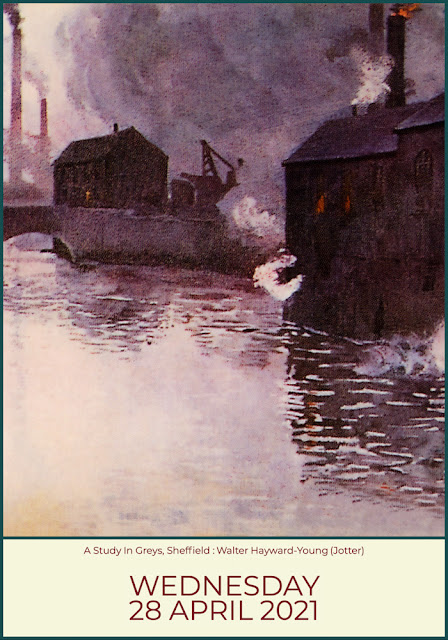 A Study In Greys is by the British artist Walter Hayward-Young (1868-1920) who was also known by the pseudonym, "Jotter". During his artistic career he turned his hand to many different ways of exploiting his talents: he designed posters for organisations such as London Transport and produced a highly popular series of articles on sketching for The Girls Own Paper and Woman's Magazine. He is particularly famous, however, for the postcards which were based on his paintings which proved best sellers during the Great Postcard Craze of the first decade of the twentieth century. On the reverse of this postcard is printed the following description: "A Study In Greys, Sheffield. This picture was made on the way to Owlerton. The predominant colour of Sheffield is grey and the smoke overhangs the whole place like a huge pall. Still, within a few miles of the town, some of England's most lovely scenery is to be seen".

Sheffield no longer has a pall of smoke hanging over it, and the predominant colour of the city is anything but grey. The city has changed .... and still some of England's most lovely scenery can be seen within a fe miles of the city centre. A beautiful Spring day and a beautiful Spring walk through the Cromwell Woods that stretch from Southowram down towards Brookfoot and the Calder Valley. For some reason, I kept seeing patterns today and late at night those patterns became almost kaleidoscopic with a little help from Photoshop and a 18 year old Glengone Malt Whisky. Can't decide whether to use them for wallpaper or a new shirt. 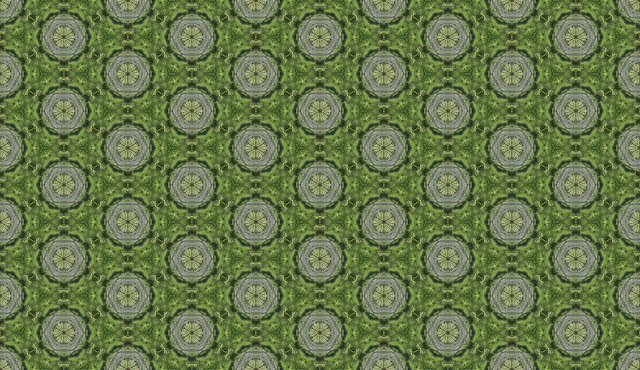 I have an almost perfect match for this week's Sepia Saturday theme image. The problem is, that it is not very old, in fact I can distinctly remember taking the photograph. But then I got to thinking: it was taken in 1972 which was 49 years ago. That's a long time ago. It is getting on for as old as the original Sepia Saturday theme image which was taken in 1914. That makes my photograph almost sepia. That makes me almost sepia. If life is a race, the starting line was some distance back!

My photograph was taken at Sandown Park Racecourse in Esher, around about the summer of 1972. It was the first time I had ever been to a race meeting and I was anxious to capture some of the movement and excitement of a day at the races. 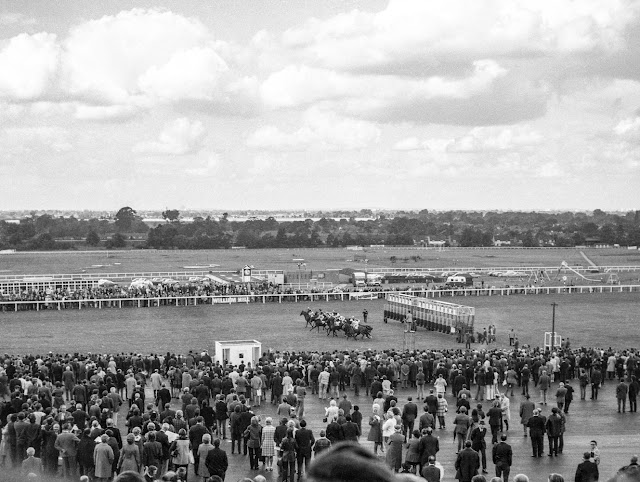 I remember the picnic we had and the friends who were with us - and the oversized tin of Tartan Bitter. It's time for another helping of mindless rants from some self-obsessed old fool with too much time on his hands. Now, I know what you're thinking - it will be something like "You are being a little too hard on yourself .... but, there again, I can see where you are coming from"; but you misunderstand me, I am not talking about my own pointless ramblings, I am talking about another extract from that paragon of early 20th century journalism, the Halifax Comet. I have been working my way through copies of the Comet for a good few weeks now and I still can't decide whether it is a failed attempt at serious journalism or an early experiment in post-modern satire. As the publication reaches its tenth birthday in 1901, the editorial content gets shorter whilst the adverts get longer. It is a little like one of the present day advertising magazines you get delivered through your letter box .... but without the interesting adverts for teeth whitening and roof repairs. 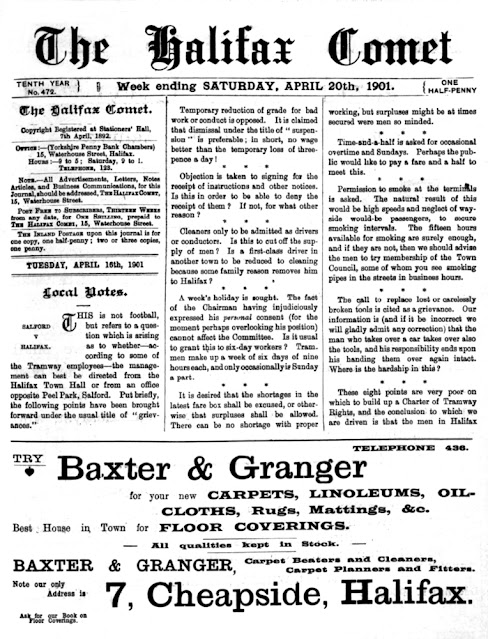 The leading news item in the edition of the 20th April 1901 is a lengthy rant against the Amalgamated Association Of Tramway And Vehicle Workers who have had the audacity to demand such things as a week's paid holiday, time-and-a-half for overtime, and an end to the practice of workers having to pay for broken tools. "How can tramway workers expect a full week's paid holiday a year when they only work six days a week", thunders the editorial? As far as premium payments for overtime and Sunday working is concerned, "perhaps the public would like to pay a fare-and-a-half to meet this"! 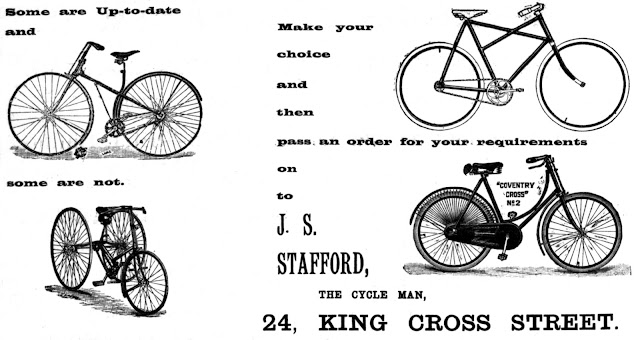 The editorial will no doubt have dripped from the pen of the owner, publisher, and editor of the Comet, the irrepressible Alderman Joe Turner Spencer. One would like to think that the propagation of these views was without a trace of vested interests, but that was as unlikely then of a media baron as it is now. The last page of this particular edition of the Comet carries an advert for the Hipperholme brewers, Brear And Brown Ltd. The advert carries a copy of an analyst's report which proudly proclaims: "I have analysed samples of brewing materials and beer and stout and as a result of my careful examination I certify that they contained no trace of arsenic"! If the Public Analyst had examined the pages of the Halifax Comet, he might not have come to the same conclusion. As far as I know there isn’t a name for it: it isn’t a recognised pastime, there are no societies for the propagation of it, nor journals that record the annals of its proceedings. I am, however, dedicated to digging up old images. It has the distinct advantage - when compared to its second-cousin, archeology - of not exposing you to quantities of mud, or worms, or rain, or snow. It is environmentally-friendly, draining only enough electricity from the grid to power-up a scanner, and making the use of old photos that would otherwise go to land-fill. And, at the end of the day, there are few joys that can compare to the discovery within the tattered and torn remnants of some unknown photograph, an image that is truly beautiful. 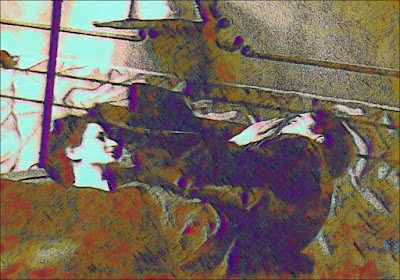 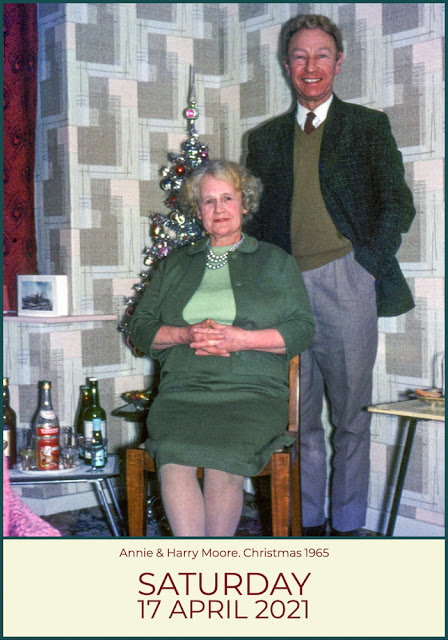 Is it just age that makes you far more susceptible to time travel? Sometimes it can be a word like advocaat, sometimes a pattern like the geometric madness of 1960s wallpapers; most times it is an image. 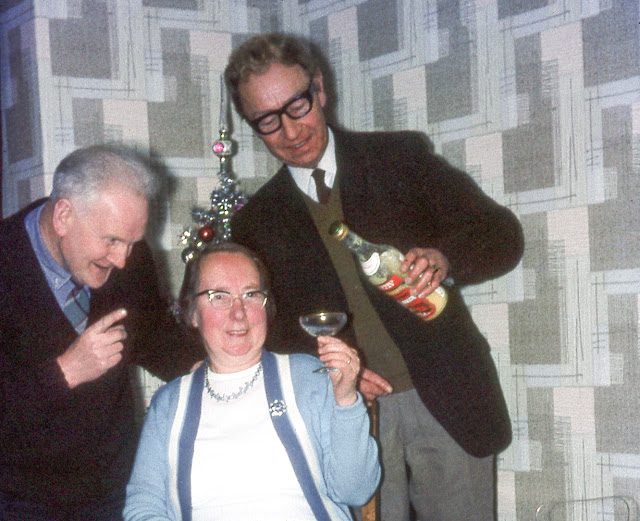 These two photographs were taken at a Christmas Party at my parent's house, sometime around 1965. They are full of memories, and by themselves could provide a rich itinerary for a week's worth of time travel. The table with the Christmas drinks - it was always a bottle of advocaat, a small bottle of Babycham,  and a bottle of sweet sherry. There may have been some port left over from a previous Christmas, but I can't recall there ever having been beer, and wine was unheard of. There is that wallpaper which is guilty of assault and battery on the senses, and the posed expressions on the faces of my aunts and uncles. There was a dish of biscuits - maybe even a chocolate one - an artificial tree and a warm sausage roll or two. It was a moment or two in time, captured within the cardboard confines of a colour slide. Now it is a rich vein of memories. 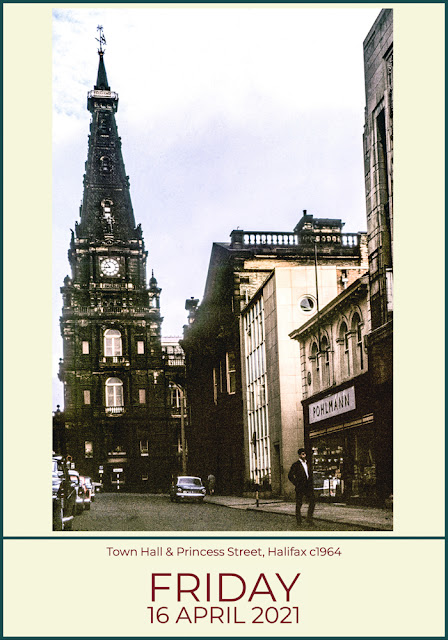 A photograph of mine of Halifax in the early 1960s. The Town Hall was still soot-encrusted, the cars parked outside the White Swan Hotel had an over-abundance of chrome, and Pohlmann's still sold pianos.. 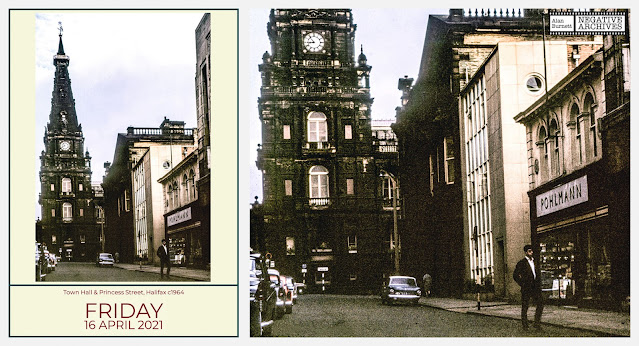 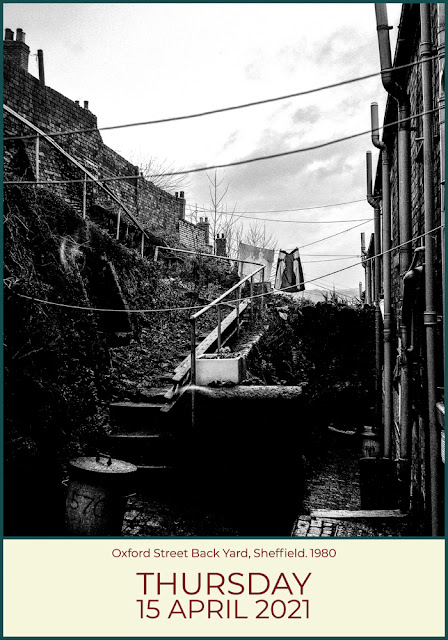 Sheffield is built on hills and therefore back yards are often more like back cliff faces. This was the back yard of the house we lived in forty years ago: big enough for a dustbin and a pushbike. Washing hung like kites, getting ready to launch once a decent breeze got up, destined for the skies over distant Rotherham.

Taking The Edge Off Tragedy 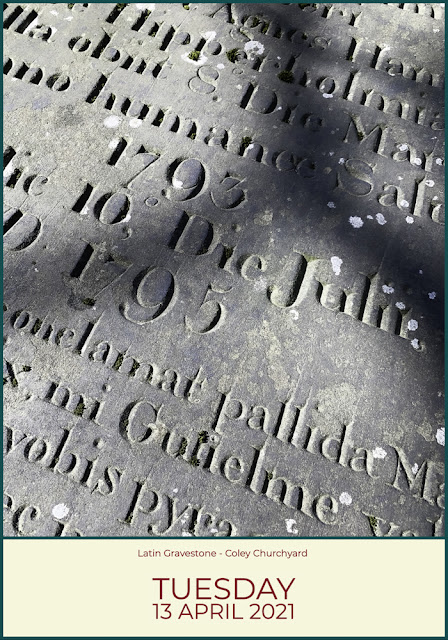 It seems so strange to see a Latin gravestone. Perhaps in Westminster Abbey or some don-filled university necropolis; but in the churchyard at Coley, within soot-falling distance of an old mill. And so beautifully carved; as though the beauty of the carving could somehow disguise the horror of a death too early. Moss now grows in the crevices, taking the edge off tragedy.
at April 13, 2021 1 comment: 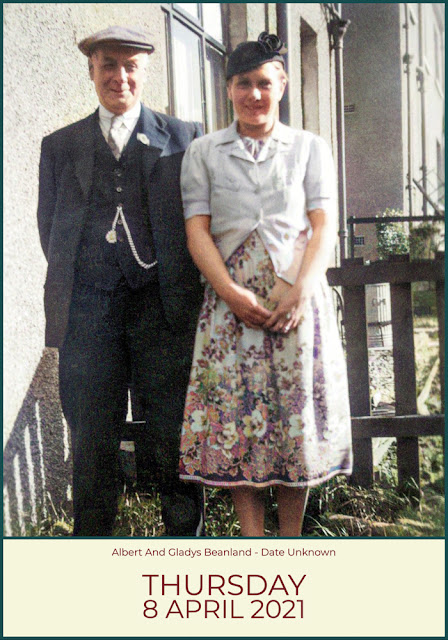 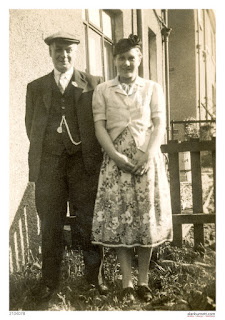 When you add colour to an old photograph - or rather when some artificial intelligence source sat high in cyberspace adds colour to an old photograph - you tend to notice things more. This is an old photo of my mother and my grandfather which must date from either the 1930s or the 1940s - but which? The addition of colour makes her dress quite distinctive, and potentially more useful in dating the photograph. My wife - who knows about such things - tells me it is 1950s, but that can't be the case, unless the same artificial intelligence has brought my grandfather back from the dead. Before seeing the colourised version of the photo, I had assumed that it was the early 1930s, but now I am beginning to think that was too early. The logical conclusion is the period around World War 2, but I tend to think of the clothing of that period as somewhat drab and uncolourful. Could the photographer - possibly my father - have captured a moment towards the end of the decade when the colours were about to go out all over Europe?
at April 08, 2021 1 comment: 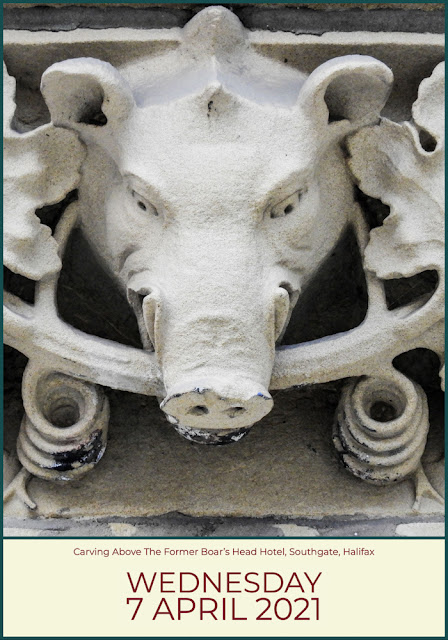 The boar's head in hand bear I
Bedeck'd with bays and rosemary
And I pray you, my masters, be merry
Quot estis in convivio
For 130 year it has looked down on Southgate, Halifax from above where the Boars Head Hotel used to be. I remember it smiling down from above the then Berni Inn: stone features set like well roasted crackling. These days it greets folk coming to mobile phone shops and greeting card emporiums - or it did until the lockdown came. Who knows what it has made of the quiet streets and the masked pedestrians, but next week it can begin to welcome people back to shops, cafes, pubs and restaurants. Slowly at first, just a few, outside and fully masked: but before too long, as many as are in the feast.
at April 07, 2021 2 comments: