I've always followed the general rule in life that states that if something looks like it won't be there for long, take a photograph of it. It is a lot easier to follow such a rule in the era of digital photography than it was in the days when films, not to mention developing and printing, represented a significant outlay. I must have taken the above photograph about fifty years ago, and I am so pleased that I did so, because not long after I took it, these particular houses were demolished. The row of houses were in Arctic Parade, Great Horton, Bradford, and it was at No 11 (the house on the right) that my grandfather, Enoch Burnett, lived and my father grew up.

I am not sure when these houses on Arctic Parade were built, the name seems to suggest that period of the mid nineteenth century when Arctic exploration was the space travel of the time. A quick search for Arctic parade in the records brought up an interesting article which, if nothing else, shows that the road existed in 1861. 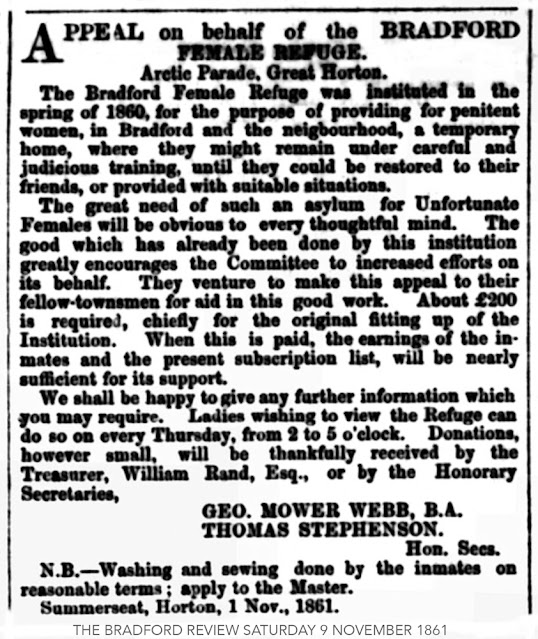 I assume that by the time my father was growing up on Arctic Parade, in the 1920s, the Female Refuge had long gone: certainly no mention was ever made of it in the family stories. I would have liked to know more about growing up in this part of Bradford 100 years ago, but so much of the history has died with a generation which, is now, long gone. But at least I have the photograph.

The Theatre Will Be Well Aired 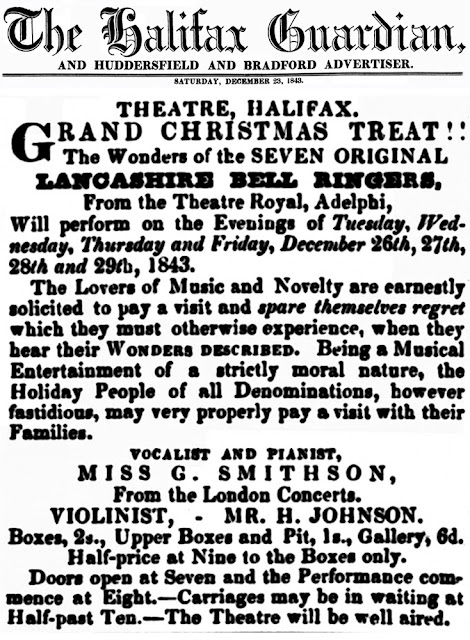 Christmas is a time for good cheer, festive gatherings, and seasonal entertainment treats: and what better Christmas treat could you imagine than a concert by the Lancashire Bell Ringers! This is the prospect that was on offer to the citizens of Halifax back in 1843, when "lovers of music and novelty" were "earnestly solicited to pay a visit and spare themselves regret which the must otherwise experience", to the Theatre in Halifax to see this "musical entertainment of a strictly moral nature". "The Theatre" - it needed no other name, it was the only one in Halifax at the time - stood on the spot where the Theatre Royal was later built.

The Lancashire Bell Ringers - seven men with a total of forty-two bells, conducted by the violinist Mr H Johnson - were all the rage at the time, and in the year following their Halifax Christmas gig they embarked upon a tour of America. The citizens of Halifax must have loved it - it would have been a bit like seeing the Beatles before they became world famous, with the added advantage that people of all denominations, however fastidious, might properly pay them a visit.

Bearing in mind the screaming fans, the blaring music, the hedonistic atmosphere, the management were at pains to point out that "the theatre will be well aired"!

A Pocket Exhibition of Elland 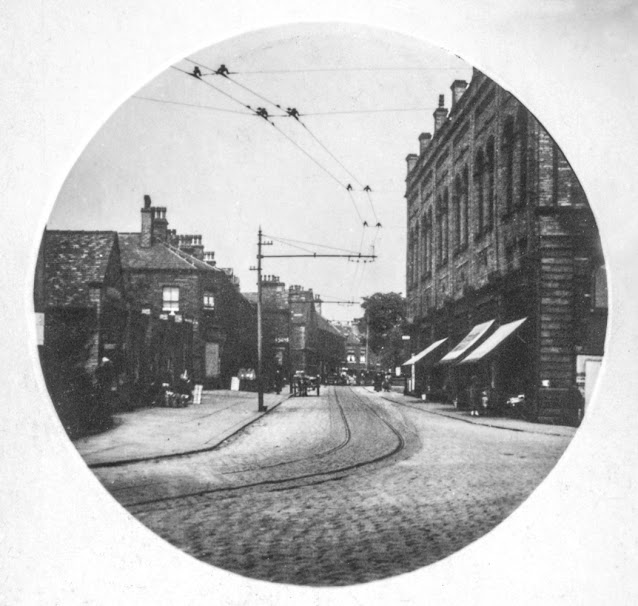 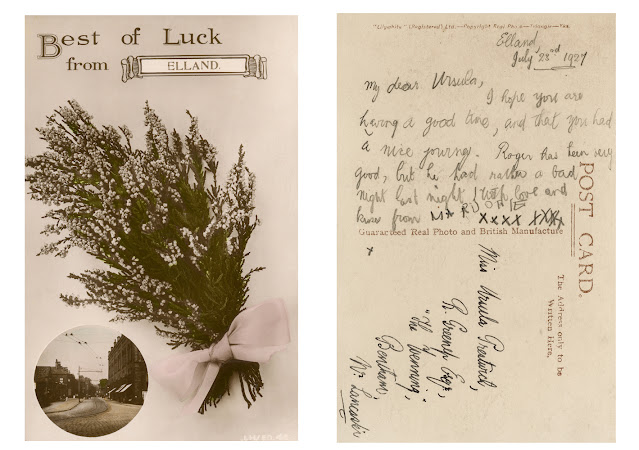 One hundred years ago, picture postcards were the equivalent of Facebook, Twitter or the like. If you had a quick message or greeting to send to a friend, pick up a postcard, string together a couple of sentences, and pop a penny stamp on the back.Because some of these postcards have been saved - kept in drawers, put in albums - they have survived and taken on a new life as pocket exhibitions of economic and social history.

Take, for example, this postcard from Elland, which was sent to Miss Ursula Prestwich in July 1927. It might not be the best example of a "picture" postcard as most of the card is taken up with a generic illustration of a bunch of heather, and Elland is relegated to a small illustration of Huddersfield Road. The card, however, dates from the 1920s and by then the great postcard boom of twenty years earlier was over, and the variety and number of postcards available was diminishing.

One might also question the absence of a stamp - this postcard has not been sent through the post. The explanation is probably that it was included with another letter or within a parcel. The message is timeless, and could just as easily be a text message or Facebook post today:-

Elland, July 23 1927.  My dear Ursula, I hope you are having a good time and that you had a nice journey. Roger has been very good, but he had rather a bad night last night. With love and kisses from M and (Roger) 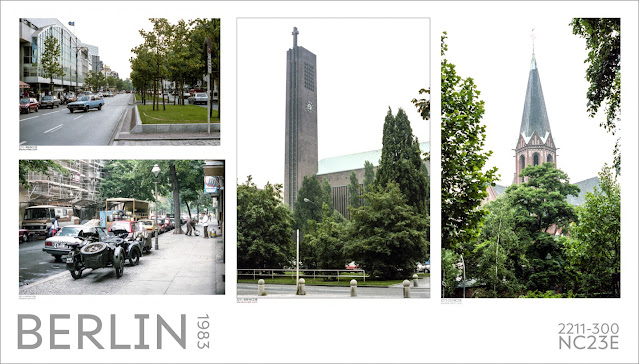 I hid from the rain today by delving into the endless files of unsorted and unscanned photographs I have amassed in some 65 years of photography. The strip of four 35mm colour negatives that found itself on the top of the pile provided an entertaining diversion and a pleasant trip down memory lane, although it took me a little while before I could identify which country that particular lane was located in. Eventually a distinctive u Bahn sign led me to Berlin and a short trip I took there in the early 1980s. I was doing some work for an EU organisation called CEDEFOP (The European Centre For The Development Of Vocational Training) and I was visiting their HQ which, at the time, was located in what was then, West Berlin. I can't pin the exact date down, my best guess will be around 1983. I flew to West Berlin, which means it was before I was prevented from flying with my progressive deafness. Equally it was before 1993 when CEDEFOP's headquarters was moved to Thessaloniki in Greece. I was able to track down at least one of the churches that appear in my photographs - the modernistic brick building is the Kirche am Hohenzollernplatz. There must be more negatives from that trip somewhere within my negative files: my exploration of the city - forty years after visiting it - will have to wait until they appear. 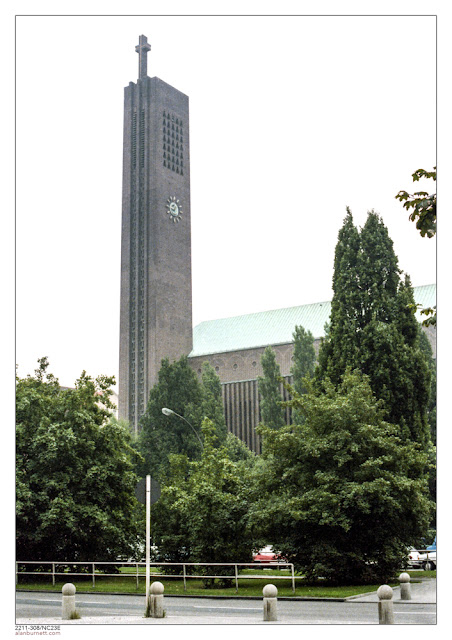 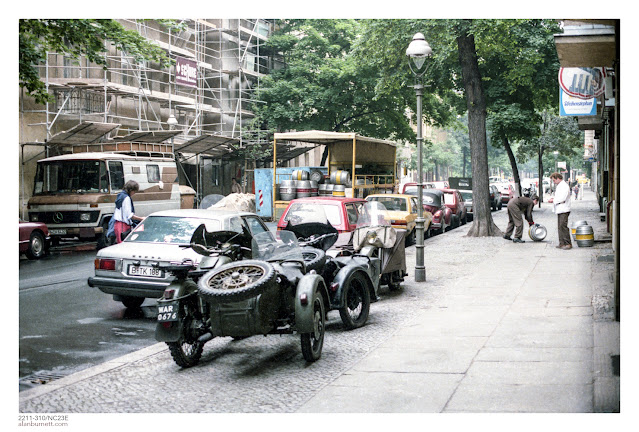 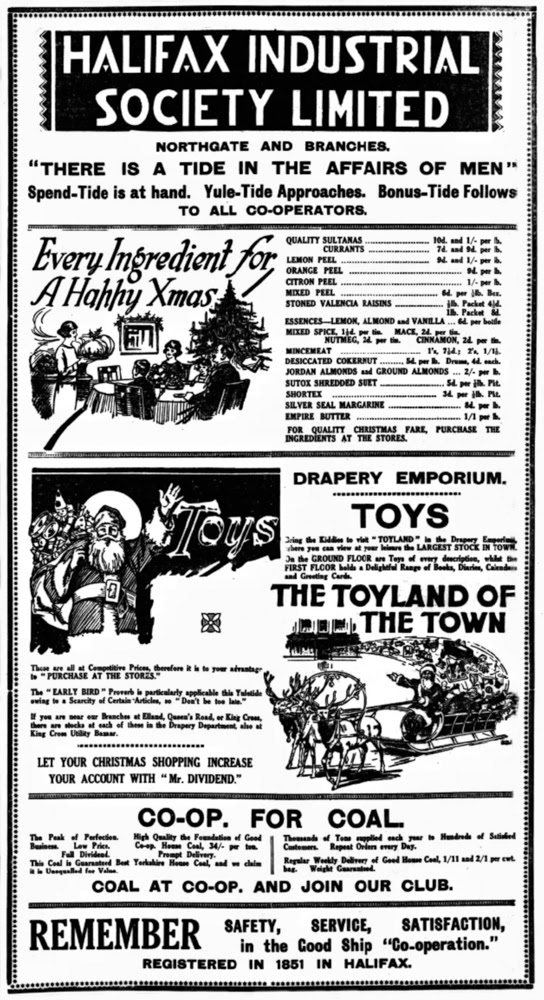 There is a common cry you hear at this time of the year, a nostalgic-fuelled bemoaning of the ever-increasing commercialisation of Christmas. So often this goes hand-in-hand with the observation that 21st century retail conglomerates launch their seasonal grab of our scarce resources earlier and earlier each year. It is worth spending a moment or two reading this advert from the Halifax Industrial Society that appeared in the Halifax Daily Courier and Guardian exactly 90 years ago today - on the 17th November 1932.
"There is a tide in the affairs of man", proclaims the copywriter with a Shakespearian flourish, only to go on to say "Spend-Time is at Hand!". By the 17th of November, shoppers were being urged to stock up on "every ingredient for a Happy Xmas", a list that included Silver-Seal Margarine at 8d per lb, orange peel at 9d per lb, not to mention Sutox Shredded Suet at 10d per lb.
The children's Christmas stockings were not safe from this advertising onslaught, either. "The Toyland of the Town" would be located on the ground floor of the Northgate store. "The "Early Bird" Proverb is particularly applicable this Yuletide", warns the advert, "owing to a scarcity of certain items".
And why not crown your Christmas shopping expedition by ordering a sack of "Best Yorkshire Coal" - a bargain at just 1/11d. I've ordered a couple of sacks already - you can never plan too early for Christmas.
at November 17, 2022 No comments: 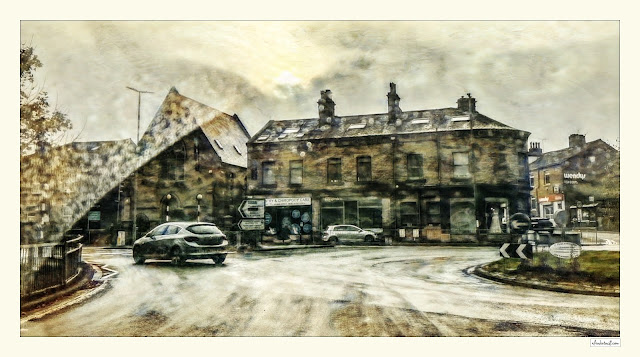 This is the result of an experiment to see whether a truly bad photograph can be made interesting. First take a truly bad photograph, which I did whilst driving around a roundabout as a passenger in a car. Without thought of composition or content, I just pressed the shutter button. Next set to with cropping, adjustments, filters and whatever you can find in your digital kitbag and see what you can come up with. Interesting? Probably not, but it was worth the experiment.
at November 05, 2022 No comments: