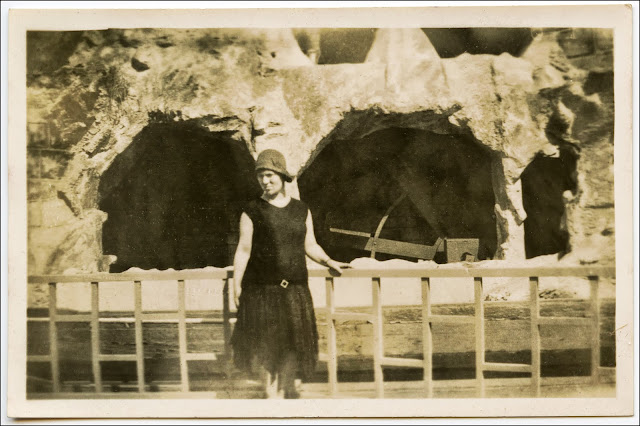 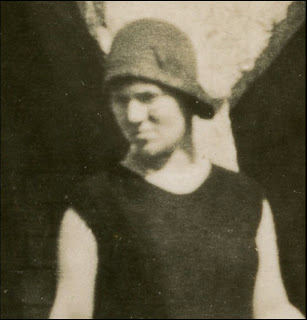 Marilyn chose a photograph of the entrance to the Wombeyan Caves in Australia for this week's Sepia Saturday theme and I am pleased to be able to emerge from the sepia darkness of my recent holidays to feature this fine photograph of none other than Auntie Miriam (well, at least I think it is her). That great cataloguer, her husband Frank Fieldhouse, entitles the shot "By The River Caves, Blackpool Pleasure Beach", although surprisingly, for him, he doesn't date it. I would guess it was taken some time in the mid 1930s, but that rather severe expression on her face is timeless.

The "River Caves" was a popular attraction at many a seaside pleasure park on both sides of the Atlantic 100 years ago. It would entail rides through caves and tunnels on boats presenting a series of themed displays - the one at Blackpool was based on the idea of "Around The World In 80 Days". Perhaps Miriam was a little jet-lagged (or boat-lagged) and that is why she is looking so uncharacteristically fierce. Having just travelled half way around the world in 48 hours I can sympathise with her feelings.

You can easily go around the world in far less than 80 images by checking out the other participants in Sepia Saturday 183 by following the links on the Sepia Saturday Blog.
at June 28, 2013 23 comments:

Above The Blue And Windy Sea

Many years ago I promised The Lad that if ever he became a doctor,he and I would go to San Francisco to celebrate. He has become a doctor and in a few days time, he, and I, and the Good Lady Wife, and the Lovely Girlfriend will jet off to the West Coast for a holiday. Our break will coincide with my 65th birthday, so I am hoping that lots of craft beer and a little good jazz will be added to the mixture. What with preparations and vacations, News From Nowhere will be off the air for most of June. But I will be back soon .... and hopefully I will have a tale to tell. Until then, I am to be found there in San Francisco, above the blue and windy sea.
at June 04, 2013 19 comments: