A classic Picture From Nowhere : I know not who, where or when. Three carefully posed men, three carefully composed faces. You can write their past or invent their future. All that is given is the moment.
at February 14, 2020 1 comment:

I know what a burlesque artist is, and I have seen a good few comediennes: but what, in the name of all that is risqué, is a "serio"? Perhaps Miss Mollie May can enlighten us. 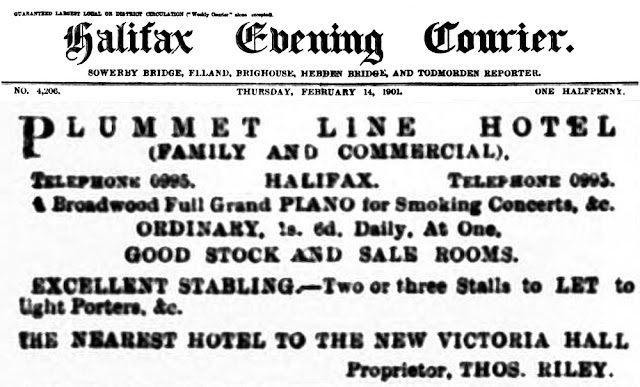 And whilst we are at it, whatever happened to smoking concerts?
at February 13, 2020 No comments:

Entrance Round The Corner 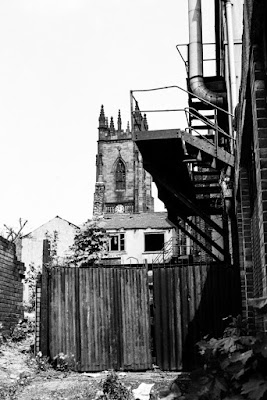 Today's scan features a strip of negatives that come from a film from the 1980s. Three photographs from the strip feature Elland. Two of them show some half-demolished buildings with the tower of St Mary's Church in the background. The buildings, which look a little worse for wear, must face onto Westgate, and they may include the back of the old Rose And Crown Inn. The inn - which dates from 1725 and is a Grade II listed building - is still standing, although as a boarded-up empty building rather than as a living pub. 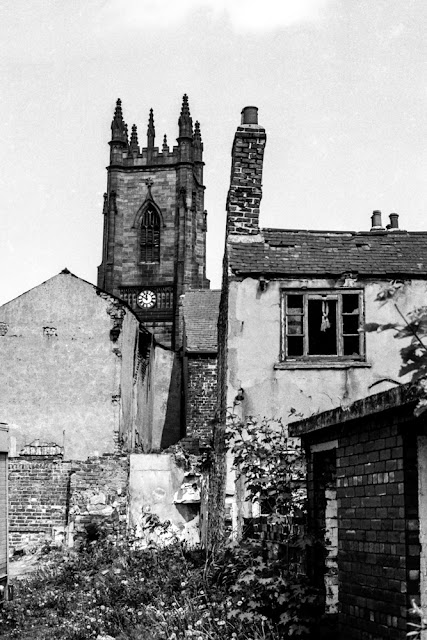 The third shot was taken a little further along Southgate, I think, and features the door to one of those old cafes where the entrance always seemed to be around the corner. 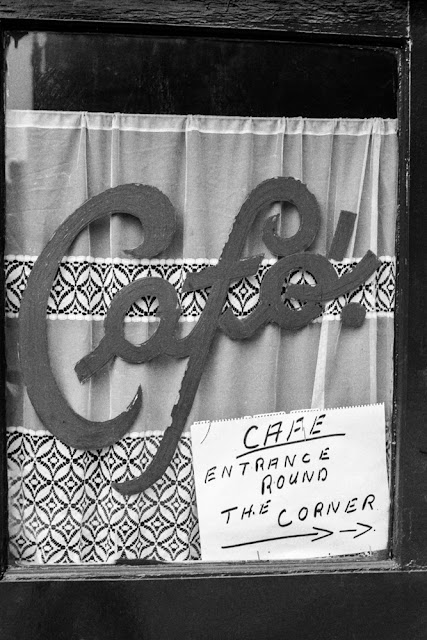 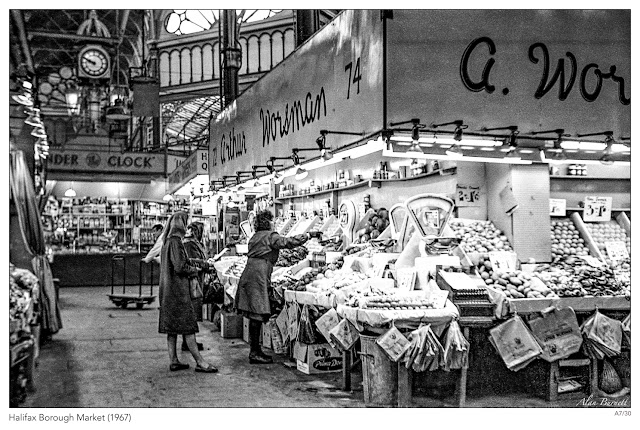 I was scanning some of my old negatives yesterday and came across this photograph of Halifax Borough market, which dates from around 1967 (say what you want about decimalisation, it provides invaluable help in dating old photographs).  Halifax's indoor market was - and still is - one of the finest examples of these Victorian cast-iron framed markets in the country, with it's fan-like windows and suspended gas heaters.

By complete coincidence, I was later browsing on YouTube and discovered, to my delight, that someone had posted an episode of the 1975 series "Nairn's Journeys", in which Halifax Borough Market has a starring role. Ian Nairn (1930-1983) was a British architectural critic and writer who was famous for his outspoken criticism of certain aspects of British town planning in the 1950s, 60s and 70s. In 1959 he published a book, "Outrage" which highlighted what he saw as the modern trend in unimaginative town planning. I was introduced to his ideas by my brother, Roger, who had one of the first copies of his book and was a great follower of his work. The "Nairn's Journeys" series was a wonderful series in which he conducted "architectural football matches" between northern towns. One memorable episode was devoted to a contest between Huddersfield and Halifax.


If you have never seen the episode, I apologise for spoiling things by telling you that Halifax won the contest by five goals to two! Part of that victory was down to the splendid Halifax Borough Market, but most of it was brought about by the fact that "Halifax had managed to express itself". The film is particularly fascinating for its praise for the modern architecture of Halifax - the, then, new Building Society HQ - and its footage of the Piece Hall during a time of transition (it was due to be turned into a car park!)

Thinking of that same architectural football context 45 years on, I am convinced that the outcome would be just as positive in Halifax's favour. It continues to express itself as a town proud of its heritage but with an eye to the future.
at February 07, 2020 3 comments: