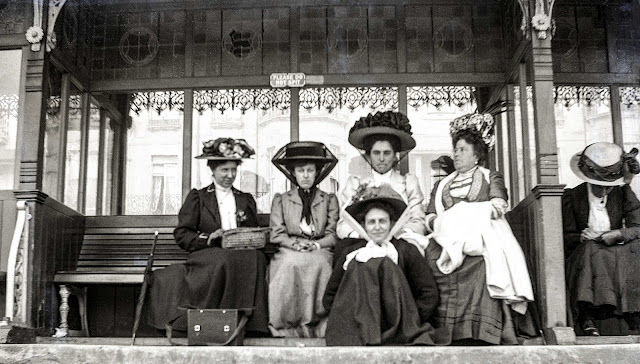 This is a scan of a glass negative I acquired on eBay, and for once I have a little information about it, as it arrived with the description "Edwardian ladies with decorative hats in Hastings". The hats are indeed spectacular (one is almost reminded of African ladies who carry great jugs of water on their heads), but it is the faces that capture my immediate attention. 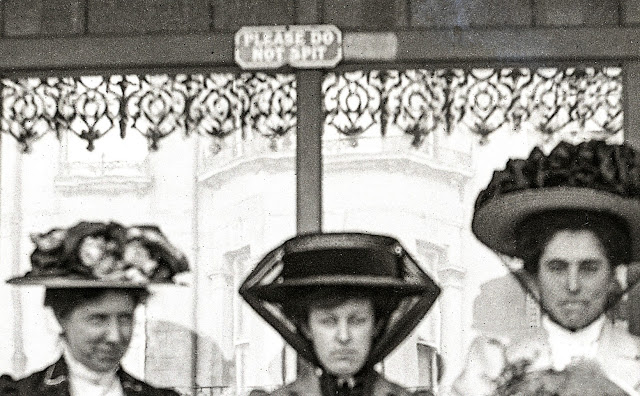 And then, once I focus in, my attention is grabbed by the municipal instruction, crafted in finest brass and screwed into place: "Please Do Not Spit". I remember someone once telling me about the public announcements that used to be featured on the upper deck of trams in Manchester. Some were public health announcements whilst others would urge to public to make full use of the municipally controlled transport infrastructure. On one such tram, two such notices had appeared next to each other at the front of the tram. "Do Not Spit" declared one, whilst its' neighbour admonished people to "Use The Ship Canal".
at November 30, 2016 6 comments:

For Everything There Is A Season In The Sun

For everything there is a season and it just so happens that the season for producing enough 2017 calendars to fill the Christmas stockings of a range of friends and family members is the last week in November (especially if you are a tight-fisted Yorkshire chap and want to take advantage of the Black Friday deals from the digital publishers). That is the reason why my various blogs have been neglected for the last couple of weeks. Now the calendars are designed and the orders have been submitted, so I have time to return to the pressing business of the pointless and inconsequential.

And what can be more inconsequential that old photographs of unknown people. Here are two old photographs I bought from the same second-hand stall. I have no idea who either group are or where they were when they had their photographs taken. Quite clearly, they inhabited different levels of the Victorian or Edwardian social spectrum - but I suspect that the photographs were taken at around the same time.

Other than that, they are not related in any way. But they have most probably sat next to each other in the box on the counter of the second-hand shop for years. Maybe they had time to get acquainted, to share experiences, to swap hopes and fears. Their pigments faded and their corners got creased and folded, but they would eventually share a season in the sun. 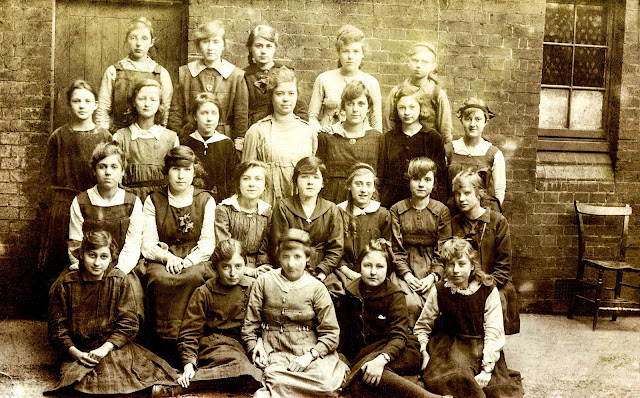 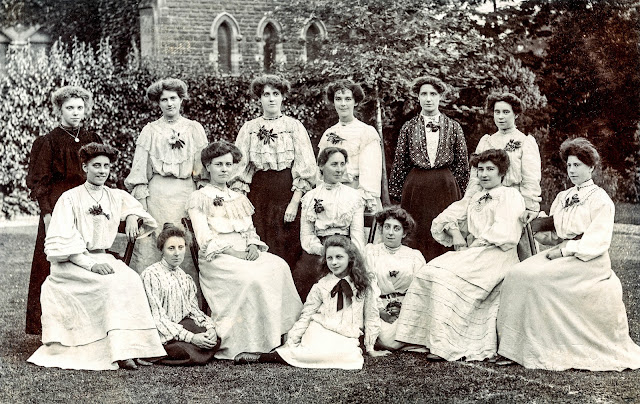 A Tidy Room And A Tired Brain 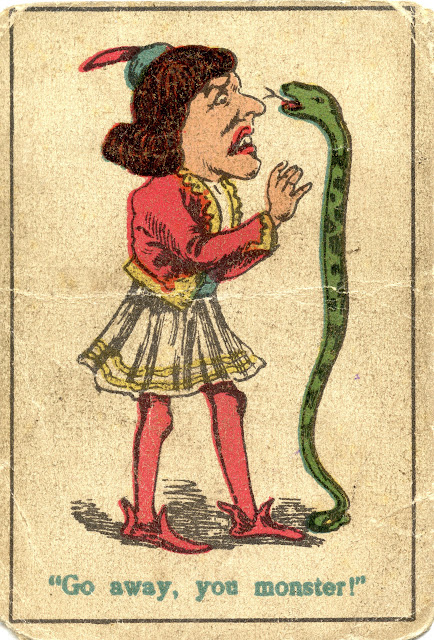 I am still trying to come to terms with all that has been happening in the world this year - and I have decided that the most logical response is to tidy my room. I suspect that this might have been the genetic response to times of stress and danger of us Burnetts and Beanlands over the centuries. When the lights were going out all over Europe, Fowler Beanland probably sorted out his postcard collection. When Hitler's tanks pounded their way through the low countries, Enoch Burnett would have been tidying up his tool shed.

During my bout of tidying, I rediscovered the pack of early snap cards produced by Spears Games. They are advertised as "a most diverting game with beautiful coloured cards of grotesque characters", and one card seemed to be particularly appropriate for the events of 2016. I will leave it up to you to identify the snake - there are enough potential candidates about. 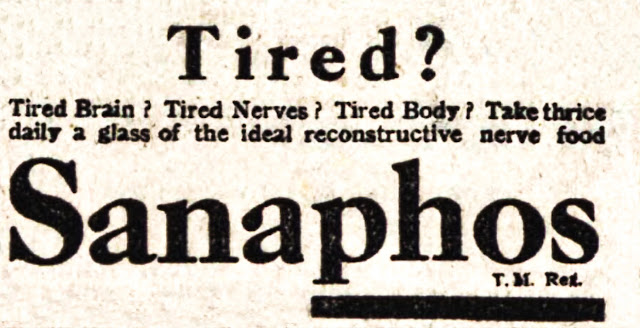 Another discovery was an old advert for Sanaphos. I have not been feeling quite 100% recently and I have put it down to a cold (manflu).  But now I know what the problem is - I am suffering from a tired brain. Once I have rested it with a short afternoon nap, I will start trying to track down a supply of Sanaphos.
at November 18, 2016 12 comments:

A History Of My Family In 100 Images : 4. What God Will And The Missing Berries 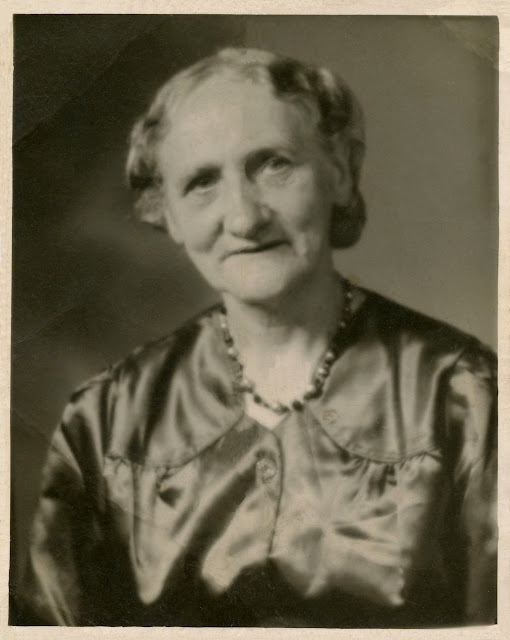 The fourth cardinal point of my family history is Isobel's father's family - the Berrys. As with most family trees, there is a branch that yields fewer easy pickings for the amateur genealogist, and with my family - despite the branch name - it is the Berrys. From the point of view of where we now live, they are the most local family - the local parish records show a WhatGodWill Berry being born in 1730 no more than a mile from where we now live - and it is still a family name that is well represented locally. It is just that nobody in the family seems to have saved family photographs, or if they did, they got handed down to someone else. My photograph is a Berry by marriage: it shows Sarah Ann Shaw, the mother of Raymond Berry, who was Isobel's father. In 1905, she married Kaye Holroyd Berry, Isobel's grandfather, and they lived together in the local town of Elland until their deaths over fifty years later.

Despite the shortage of photographs, the Berry/Shaw line is a fascinating element of the wider story of my family, containing some of the most colourful characters and some of the most tragic stories. There are, however,  a further 96 images to go so I will save some of these stories for further down the line.

Let us limit ourselves for the moment to some very basic facts about Sarah Ann Berry. She was born in Ripponden in 1876 and shortly after that, her family moved the few miles over the moors to settle in Elland. Like so many of the young people from these parts at the end of the nineteenth century, she worked in the local woollen mill, and by the time she was twenty-five appears to have given birth to at least two illegitimate children. Following her marriage to Kaye Berry - who himself had a somewhat colourful background - she had two further children, one of whom, Raymond Holroyd Berry, born in 1916, was Isobel's father.

It is a fascinating family history, and one I look forward to exploring in greater depth in the future. The ways that family fortunes ebb and flow over the generations is always an interesting story in itself. When I have looked back at  the parish records and seen that distant relative of the Berry family being christened "WhatGodWill", I have always assumed it was the result of some misunderstanding at the baptism ceremony - "What do you name this child? Oh, what God will". However, on reflection, considering the fortunes and misfortunes that were to await the family in the centuries to come, those ancient forebears were, perhaps, wiser than I thought.
at November 16, 2016 3 comments:

That will teach me. Earlier this year, in June, I took a couple of weeks out to sail around the Baltic and when I got back I discovered that the UK had decided to conduct an experiment in suicidal idiocy.  Three or four months later I take a couple of weeks out to sail around the Canary Islands and when I get back I discover that the United States has signed up for Idiocy 101 as well. Well, that's it: a nod is as good as a wink to a blind donkey. All future holidays have been cancelled.  Sunset over Gran Canaria is a beautiful sight to behold, but sunset over rational enlightenment is a fearful sight indeed.