Sepia Saturday 391 : Marching Back To Retrieve Some Love Letters 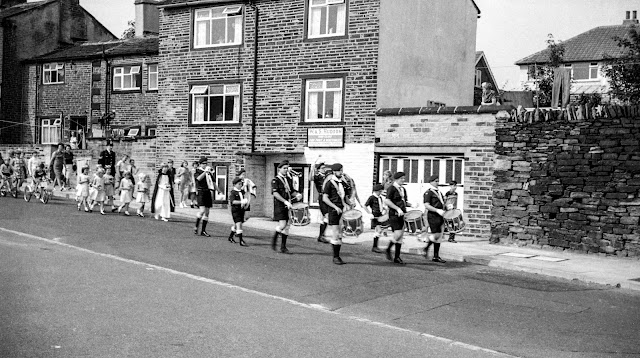 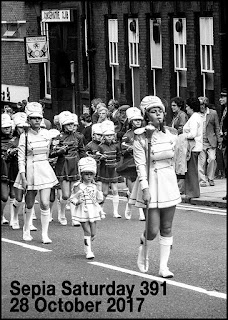 Our theme image this week features a parade through the streets of Rotherham in the early 1980s, and my matched image features a parade through the streets of Northowram - a village a couple of miles north of Halifax - in the mid 1960s. This was the same village I grew up in, and looking back at this strip of negatives taken fifty years ago is a little like marching backwards through my life. I used to walk up this road to my Junior School every day, and I was familiar with every cottage and every donkey-stoned doorstep. I can particularly remember that magnificent stone wall that can be seen on the right of the photograph, which is now, alas, long gone. It was a dry stone wall of significant proportions, and this meant that you could slide certain stones out, and use the space behind them as hiding places for all kinds of childhood trophies. I remember secreting a series of love-letters written by the ten year old me to the equally ten year old Maureen Brown. When the wall was finally demolished (long after I had moved away from the village), were these letters found and were they perhaps passed on to the said Miss Brown? The internet is such a powerful tool of communication, no doubt I will get an answer to this question within days!


To get other answers to sepia questions, go to the Sepia Saturday Blog and follow the links.
at October 27, 2017 10 comments: 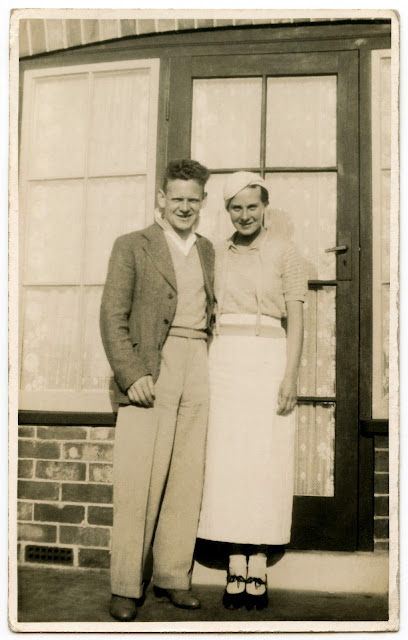 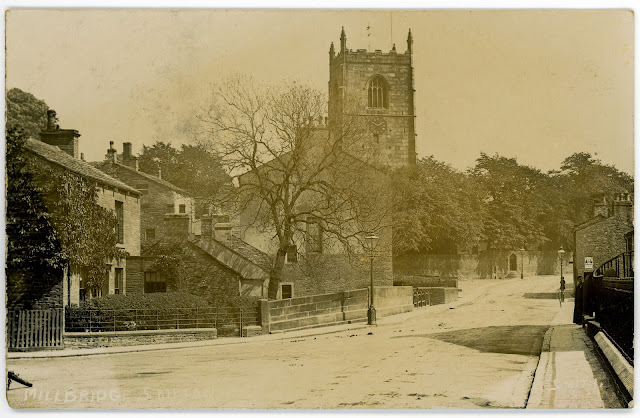 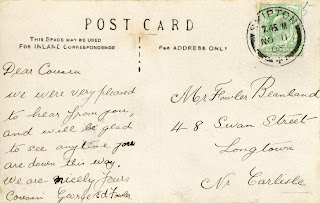 This postcard was sent to Fowler Beanland when he was living and working in Longtown, Cumbria in November 1905. The view is a familiar one to anyone who knows the Yorkshire town of Skipton - that is Holy Trinity Church in the background and behind that, hidden by the trees, the remains of Skipton Castle. The building in the very centre of the photograph is now the Castle Inn, and, indeed, it may well have been an inn at the time the photograph was taken.


The card was send by George Edward Fowler, a cousin of Fowler Beanland, who lived in Union Terrace, Skipton, and worked as a drawer in a cotton mill. The message reads as follows: "Dear Cousin, We were very pleased to hear from you, and will be glad to see anytime you are down this way. We are nicely, Yours, Cousin George Ed Fowler". If you take nothing else away from this delightful vintage postcard, take away the view of the picturesque solidity of Skipton, and take away that wonderful phrase; "We are nicely".
at October 20, 2017 No comments: 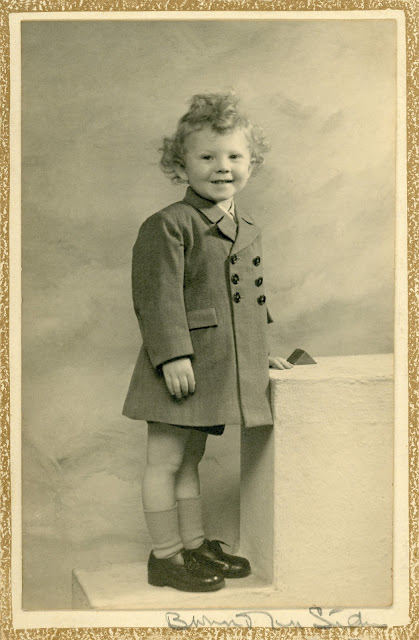 Our Sepia Saturday theme image this week features a little girl sat at a desk. My match is a little boy stood on a step - which may not sound like much of a match, but nevertheless it is appropriate for this particular time. The photograph was taken in 1946 at the photographic studios in Brown Muff's department store in Bradford, Yorkshire, and the subject is my brother, Roger.

What would normally happen at this point is that Roger would leave a comment to this post saying something like: "No, you have got it wrong again, that isn't me, it's you, and it wasn't in 1947 but 1950, and it was taken at the Busby's store, not Brown Muff's!" He has been sending such factual amendments to my family posts, from his home on the Caribbean island of Dominica, ever since Sepia Saturday started, more years ago than I can remember. It is unlikely, however, that there will be any factual corrections to this post in the immediate future, following the devastation brought to that small island by Hurricane Maria.

I have not had direct contact with Roger since the night before Maria struck, some three weeks ago. He has managed to get a message to me via other members of the family that he is safe, but with no power and no running water, things are still very difficult on the island. I suspect it will be a good few months before there is any possibility of such things as internet access and emails being available to him again.

In the absence of his ever-welcome corrections, I will look at the photograph, think of him, send him all my very best wishes, and look forward to the day when a comment appears to this post saying: "No, Ali, you are mistaken yet again, that is in fact Uncle Harry in 1907, and it was taken at Jerome's studios". 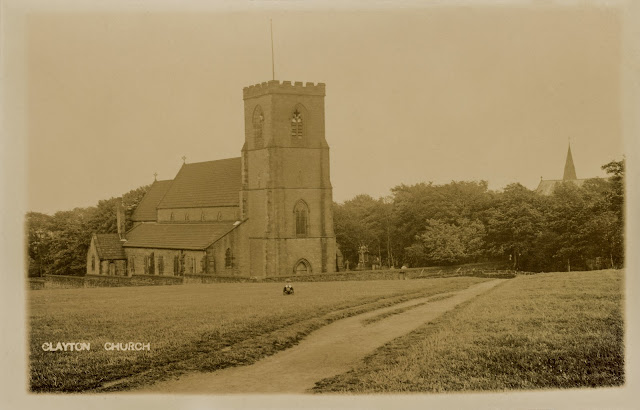 This postcard was sent from Mr and Mrs Arthur Beanland to Fowler Beanland at some point during the first decade of the twentieth century. At the beginning of that decade they were living in Keighley and Arthur was the owner of a small spindle manufacturing company. The company went bankrupt in 1904 and shortly after that Arthur moved his family into a small cottage in Clayton (just outside Bradford) and took a job as a mechanic in a local mill. The family, at that time, composed of Arthur, his wife Emma, and their three daughters: Ada, Clara and Ellen.

The Parish Church of St John's, Clayton was built in 1849 to meet the needs of the growing population of this part of Bradford. A history and description of the church can be found on the website of the CLAYTON HISTORY GROUP. 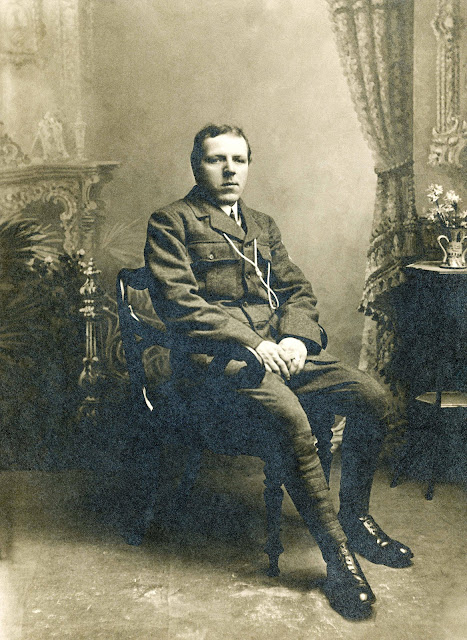 Looking at the photograph there seems to be a sadness about him - although this may simply be me reading too much into a fairly standard studio pose of the time. I see, however, a man who never knew his mother; who was sent away from the family home to live with other relatives; who never married; - and I feel a kind of sadness on his behalf.
at October 11, 2017 1 comment:

There is no finer way to get a real "feel" of a time than to turn to the newspapers of the day. Newspapers are unfettered by the "historical viewpoint", they paint a picture of a moment in time with the materials that are available at that time, rather than some idealised picture of days gone by. If time machines could in fact be constructed, then they would probably be made of paper-mache.

​Today I am travelling back seventy years to October 1947, and my time travel is courtesy of the pages of the Daily Herald. The second world war has been over for two years, but Britain is still beset by enormous problems and serious economic shortages. The dreadful winter of 1946/47 nearly brought the country to its knees far more effectively than years of enemy bombing campaigns, and in October 1947 the Government was putting together contingency plans for the coming winter.

​The examples given in the newspaper reports - football coupons being reduced to half their size in order to save paper and cinemas closing early to conserve power - illustrate just how far the economic shortages were making serious inroads into the lives of ordinary people. This came at a time when the rationing of food and luxuries was probably even more widespread than it was during the war itself. 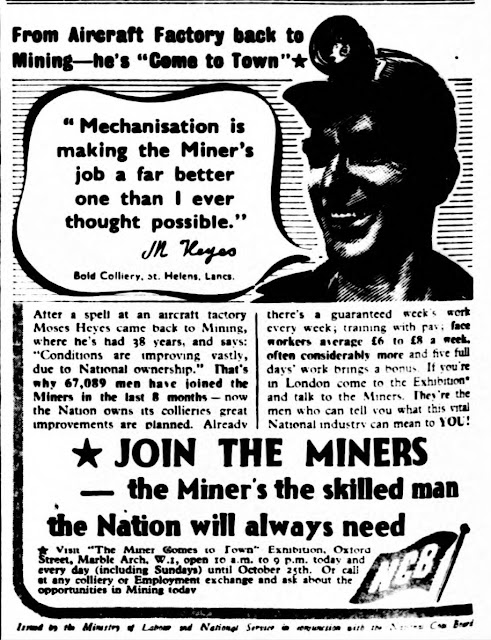 Another interesting sidelight is provided by a couple of small items which relate to the future of energy supplies in the UK. One is a short article about "Atom Boys" (note the gender specificity!), a hand-picked group of 160 young men who will become the country's atom scientists of the future. The article doesn't actually say "they will be a glowing beacon that will light the path to the future", but  you get the impression that, but for the sub-editors pencil, it could have done. The second is an advert for miners to return to the pits. "Join the Miners - the miner's the skilled man the nation will always need". Oh, if only they could have seen into the future!
at October 10, 2017 2 comments: 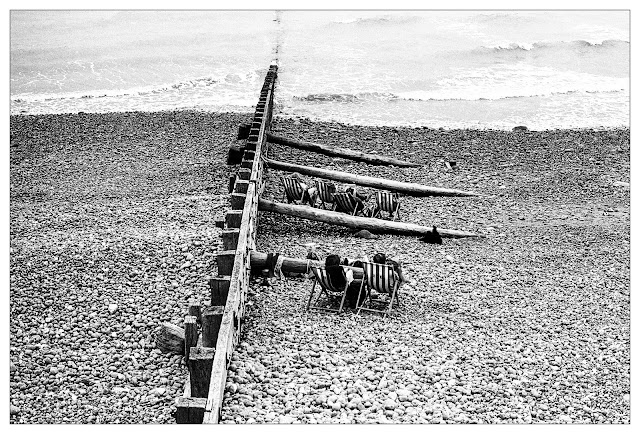 EASTBOURNE BEACH (1981) : This is a photograph from 1981 of sunbathers on the beach at Eastbourne. Somehow, it looks like the skeleton of a pebble-coated umbrella abandoned at the seashore.
at October 09, 2017 1 comment:

The Pastry Mills Of My Mind 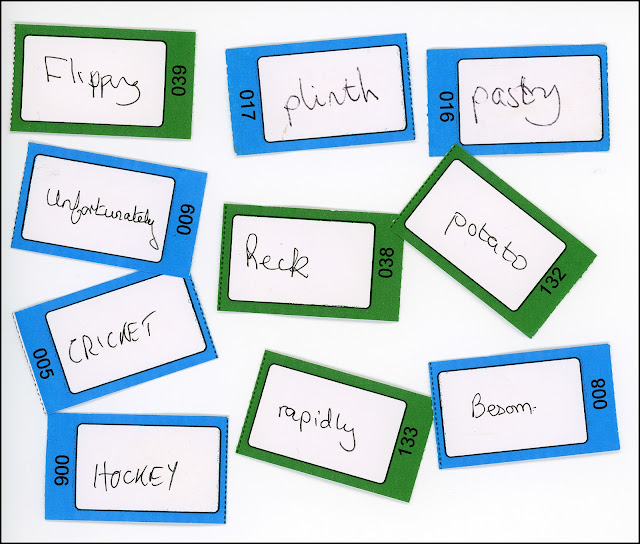 You know what it's like. It's late in the evening and you have had a pint or two. You've been at the cricket club race evening, and you are surrounded by cast-off betting tickets - all testament to the follies of gambling. So you challenge your fellow-revellers: write a couple of random words on the blank tickets so that you can take them away and compose an epic poem based around this random collection of ten ideas. This is the best I could come up with .....

Rapidly searching the besom-folds of my life and times,
Up flipping-heck hills,
Down cricket fields,
Passed pastry mills;
With hockey-shot certainty, unfortunately I find,
The chipped potato plinth on which I lost my mind.
at October 08, 2017 No comments: