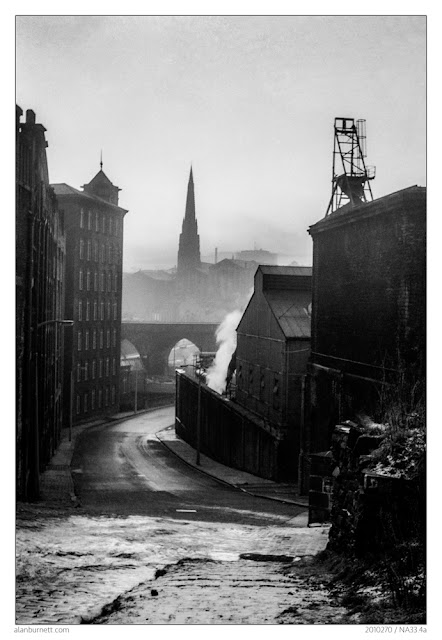 Looking through my negative archives, certain scenes keep recurring. One is this view of Bank Bottom in Halifax. I have photographs of it in rain and shine, with or without added bursts of industrial steam. At times the background of mill chimneys and church spires stand out like a fist of sore thumbs, at other times they fade into a misty backdrop. I must have taken this picture just over fifty years ago. That is, I think, ice clinging to the cobbles at the bottom of Southowram Bank. That is the mill I occasionally worked in on the left. Those are the railway arches which have an almost cathedral like feel to them. This is the Halifax of my youth.
at October 22, 2020 No comments: 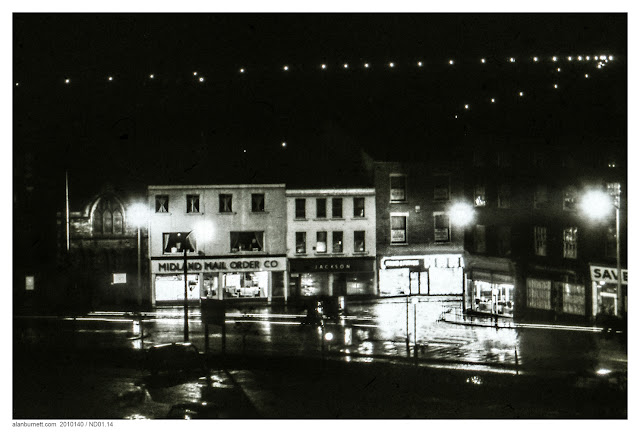 I think this is the fourth in my Halifax At Night series which must date from the late 1960s. The location is fairly easy to pin down - it is looking towards the junction of Northgate and Broad Street. You can just make out the imposing frontage of Northgate End Chapel hiding in the darkness on the left of the picture. Built in the 1870s on the site of a seventeenth century chapel, it was eventually closed in the late 1970s and demolished a couple of years later to make way for the new Bus Station. All the other brightly lit shops you can see in the photograph have also gone. I suspect I must have taken the photograph from the car park on top of Halifax Bowl. For me, the most intriguing aspect of the photo is the pattern of lights in the background which, I assume, are Beacon Hill Road and Southowram Bank.
at October 14, 2020 No comments: 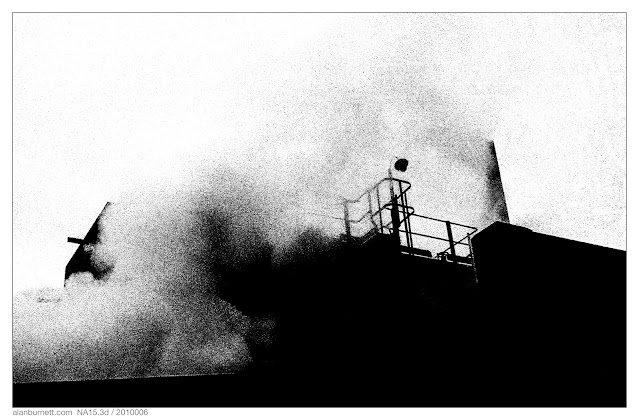 Some people collect stamps, some collect books; others collect pictures of gas works. In no way is this meant as any type of criticism: in a world beset by lunatic Presidents, cultivating an interest in old gas works seems a particularly sensible way of passing the time. I frequently, however, receive emails from people asking whether I have any photographs of old gas works or gasometers in my photographic archives. I must confess that I have lost details of many of these correspondents from over the years, so this is in the way of a public announcement - I have found some. 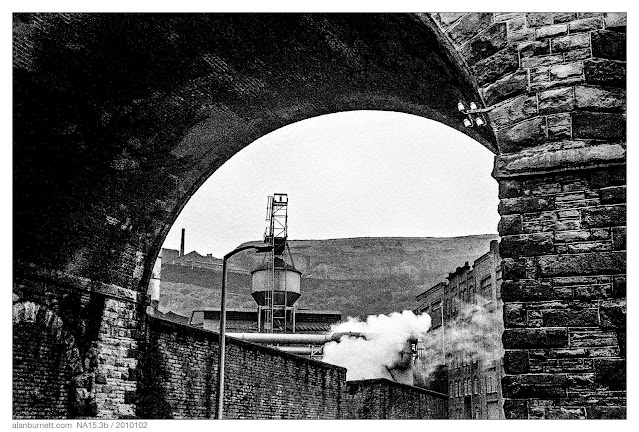 I am not sure what the collective noun for photographs of gas works is - a therm of pictures, perhaps - but this little group of photographs of Halifax Gas Works must date from the late 1960s. Beacon Hill can clearly be seen in the background of two of them, along with the old railway viaduct that used to carry the line to North Bridge and on to Queensbury and Bradford. To all collectors out there - all you Gasophelists, you know who you are - enjoy! 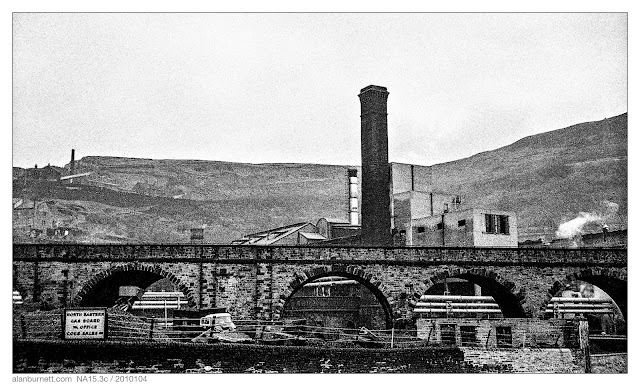 The Downfall Of Parliament 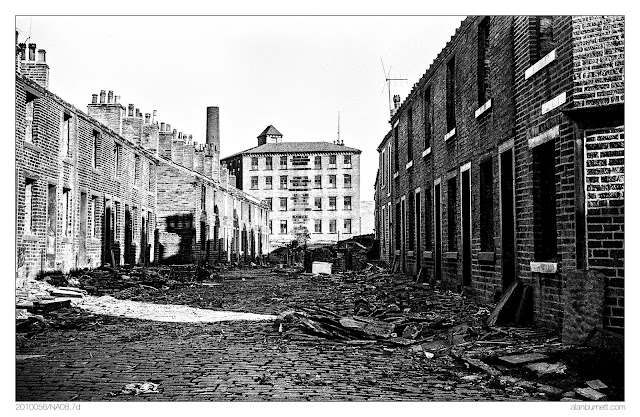 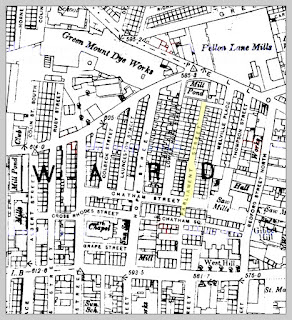 Today's dip into my photographic archive reveals an event of almost historical significance - the downfall of Parliament. To be strictly accurate, and a little less dramatic, it is the demolition of Parliament Street in Halifax, which must have taken place in the late 1960s or early 1970s. The modern digital economy, however, is driven by click-statistics, and there is nothing guaranteed to get those computers clicking like a dramatic headline. It's just a pity that the image content didn't quite allow "Look what's she's doing while Parliament falls", but you can't have everything.
Parliament Street was located between Pellon Lane and Gibbet Street (I've marked it in yellow on the map), but not a trace of it survives. Now it's all warehouses and steel fences - there are no memorials to the spot where Parliament once stood.

The Gaumont Grandeur Of Halifax 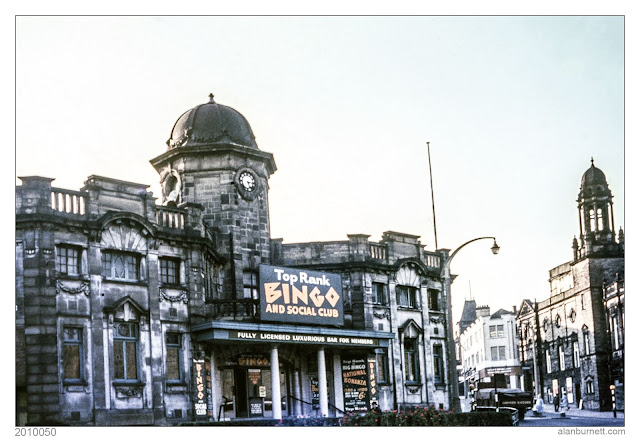 To me it is, and has always been, the Gaumont Cinema. It’s had other names and been other things, but even today I would probably still refer to it as the Gaumont. The surprising thing is that it has only had that name for a comparatively short period of its 107 year history; for just twelve years from 1948 until 1960. The other surprising thing is that it ceased being a cinema so early - by 1962, shortly before I took this photograph, it had become a bingo hall. Whatever its name and whatever its function, it remains a striking building. It is now Grade II listed, and the Historic England listing citation contains the following description:-
“Prominently sited, the cinema was designed as a major contribution to the grandeur of Halifax town centre and forms an architectural group with the listed Civic Theatre, the former Victoria Hall of 1901. The principal and right-hand facades of the cinema are rich examples of the Edwardian Baroque style. The architect, obviously well versed in this vocabulary, created dignified facades which are also eye-catching and festive enough to express the new entertainment medium”.
Grade II Listing Citation, Historic England (Oct 2000)
at October 05, 2020 No comments:

Transported By A Slogan 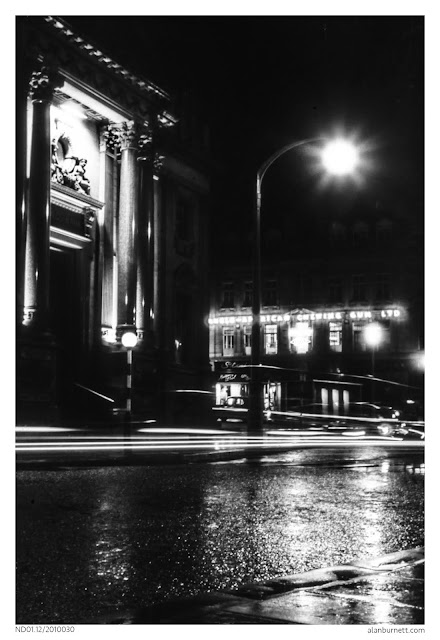 Images can be evocative: they can conjure up feelings and emotions with the skill of a practiced magician - but so too can phrases. This is another of my "night shots" from the mid to late 1960s: neither the darkness nor the passage of five decades can hide the magnificent frontage of the Lloyds Bank building. It is, however, the neon advertising sign of the Anglo-American Chewing Gum Company that transports me back in time, back to when George Street was the height of '60s sophistication, back to when Halifax was third cousin to downtown Los Angeles.
at October 02, 2020 No comments:

Before digital time stamps were invented, you had to rely on more indirect means to date photographs. Thanks to a newspaper headline about the launch of the Serious Fraud Office, I can confidently say that this photograph of me was taken in April 1988. I seem rather relaxed, sat in one of my parent's over-floral chairs, pipe in mouth, FT in hand, and, no doubt, my mother busy making me a mug of tea in the kitchen. This was eighteen months before the birth of Alexander: my hair has yet to turn grey and the biggest problem seems to be the state of the British economy. I was forty years old, living in Sheffield, working in Doncaster. Although my hearing had started to decline, I could still manage with a hearing aid (it will have been in my, hidden, right ear). The photograph was taken in Oaklands Avenue, Northowram - the house I grew up in. At some stage, I had captioned this image: "AB with FT" - it seems quite appropriate.

The Days Before Burdock 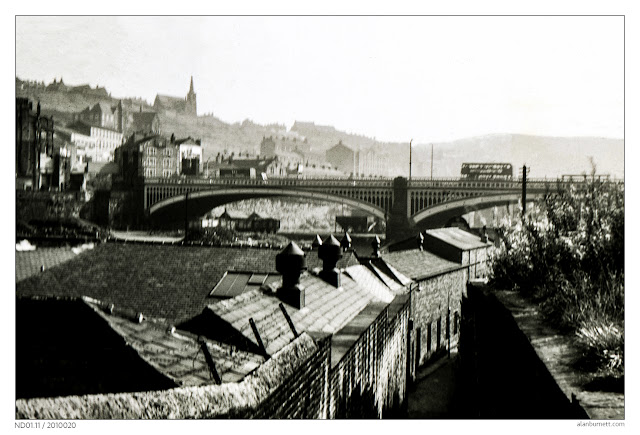 This old image has gone through quite a journey. It was far from perfect when it started life, 55 years or so ago: the focus was suspect and the composition could have been improved by some selective demolition work. At an early stage in its life it got converted from a negative into a positive slide - I can't remember why I did that, let alone how I did it - and then it was abandoned to gather dust and scratches. I've tried to revive it a little, but as many a Hollywood star will tell you, cosmetic surgery has its limitations.

We are left with a slightly faded memory of what North Bridge used to be like, back in the days when big wagons went over it and trains went under it. These were the days before Burdock, the days when St Thomas had a spire, and when Beacon Hill was treeless.