Reading Dreams That Have Already Run Their Course 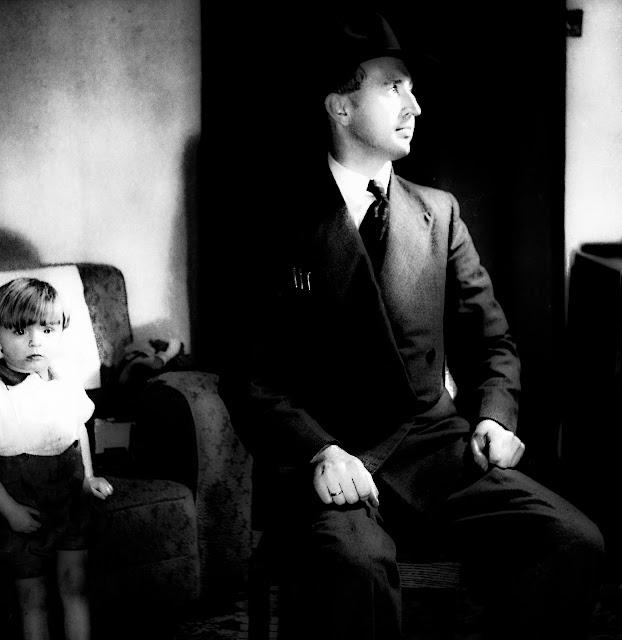 My hand is slowly recovering from the surgery of a fortnight ago, although it is still quite difficult to achieve the careful manipulation which is required for such tasks as typing, writing Christmas cards, driving and washing up! Whilst this means that I have to be driven to all those endless Christmas get-togethers and visits to the pub (at which, I am happy to report, determined physiotherapy has already resulted in my ability to lift a pint glass), it also means that my end-of-year blogging has been, at best sparse, and at worst as fecund as the generosity of spirit of a Daily Mail editorial. For this I apologise and promise to improve my productivity (and my similes) in the New Year.

As always, breaks in routine provide opportunities for allowing my imagination to wander down slightly different byways; and I have become a little obsessed by a small batch of old medium format negatives I recently bought on eBay. I have no idea who they belonged to or where they came from, now have I any clues as to the identity of the subjects: but in restoring some of these old photographs such ignorance can be a kind of bliss.  My guess as to the period most of the negatives were shot is the immediate post-war years, and they were obviously taken by someone who had a significant degree of photographic skills (anyone who went to the trouble of keeping their negatives is likely to have been a keen photographer). 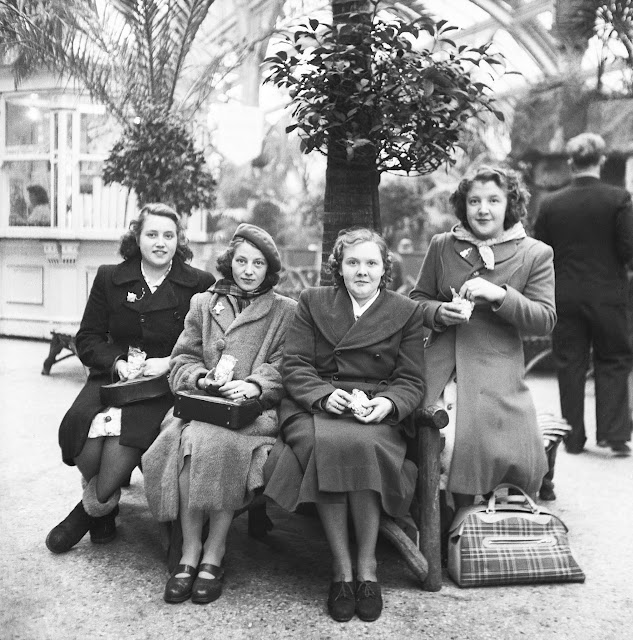 One of the great joys of working with old negatives is that you can bring to them all the digital tools of the Photoshop age, tools that would have been beyond the imagination of the amateur photographer of fifty or seventy-five years ago. As an old negative appears on the scanning screen after probably half a century of dark slumber, you almost feel as if you are bringing something back to life, waking an image up from a lengthy hibernation. You look into faces that have been unlooked at for generations and read dreams that have already run their course. There is something rather magical about it : especially when you are sat at home with a bandaged hand and only a limited supply of real ale for company.

So I would like to leave you with a final image, one which seems to sum up everything I love about old photographs. And with it I would like to wish each and every one of you a most enjoyable Christmas and a happy and peaceful New Year. 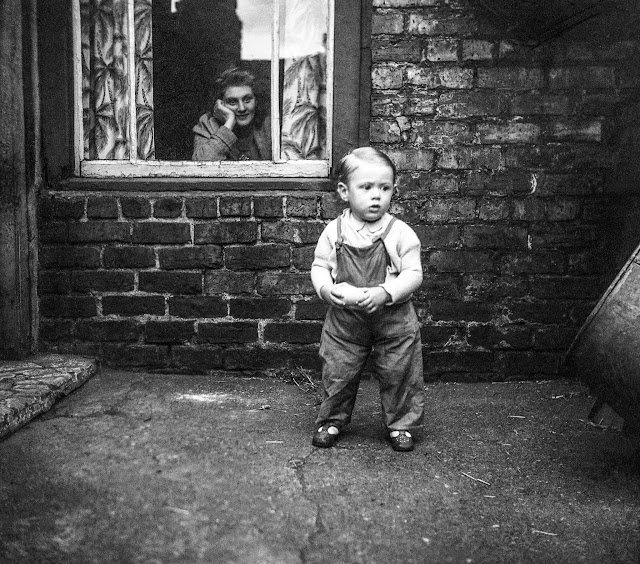 Proposals For The Future Of Halifax 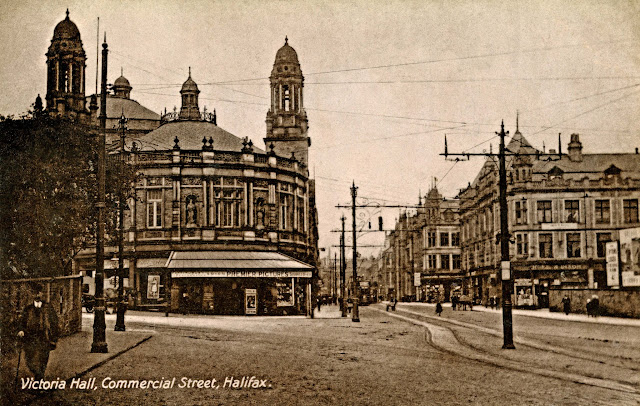 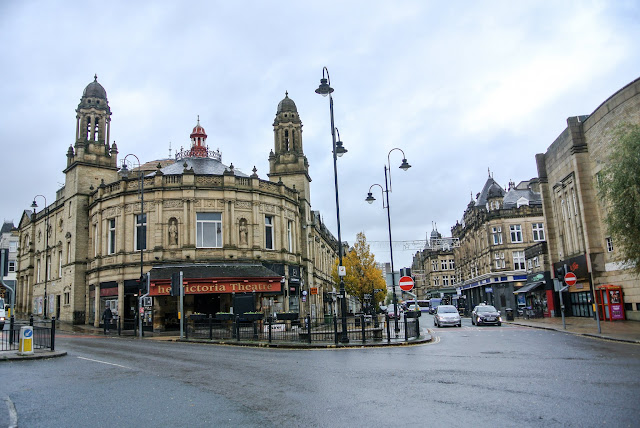 I had to stand precariously in the middle of the road in order to get a modern comparison shot to the one featured in this old Edwardian picture postcard (the things I do for whatever it is I do). The danger was worth it because the two shots provide testament to the skill of generations of Halifax town planners who have managed to preserve much of the Victorian architecture of the town. As a relatively small town wedged in between its bigger city cousins, Halifax is constantly trying to find its way in the post-industrial age. I think the solution is relatively simple - and not outrageously expensive. Demolish any building built after 1930 (the date is somewhat arbitrary but would allow the cinemas to remain); re-lay the tram lines; and market the town as an Edwardian and Victorian retail theme park. Job done.
at December 07, 2015 7 comments: 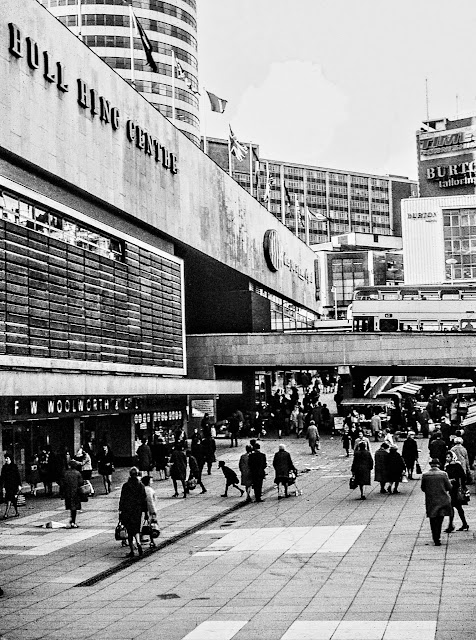 In 1968 I went to live in Birmingham for a year. These two photographs were taken during that period and feature what was, at the time, the modern shopping centre at the heart of the city : the Bull Ring Centre. The Centre was all blocks and concrete, passages and steel. overpasses and underpasses. It was a delight for the monochrome photographer - but not for much else. 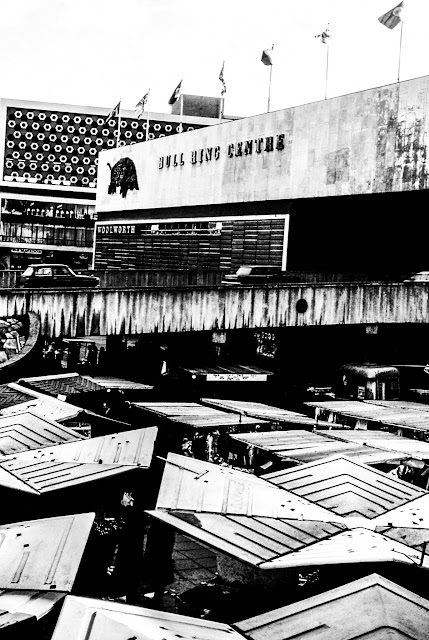 The old Bull Ring Centre has been demolished now (replaced by another one which has imaginatively been called Bullring) I have not been there yet, but I suspect that it will not provide the same inspiration. 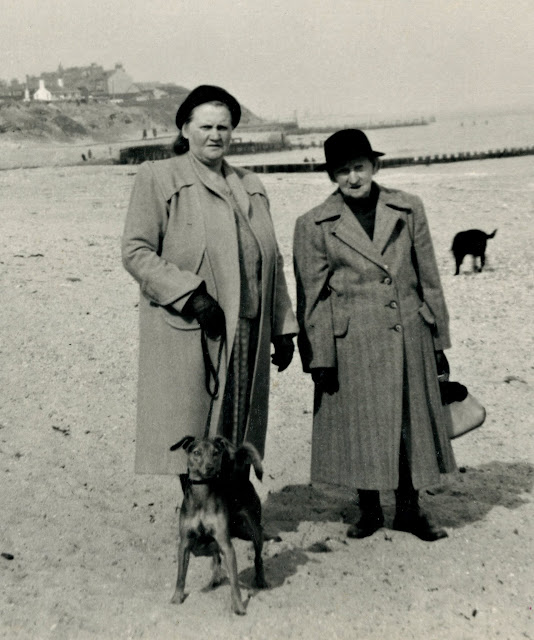 Our Sepia Saturday theme image this week features an illustration from a late Victorian edition of Robinson Crusoe by Daniel Defoe. There are all sorts of directions I could go with this theme. My Great Grandmother, for example, married a chap called J Robinson Thickpenny; but that is another story altogether and best left until after the watershed.

Daniel Defoe himself would be a useful thread to follow, for the man had a considerable affection for Halifax - the little Yorkshire textile town I will always call home. Defoe was a jobbing-writer of the best sort, turning his hand to anything that would put food on the table (if he had been alive now he would probably have published a blog). During his lifetime, other than the famous Robinson Crusoe, his bestselling work was a book entitled "Tour Thro The Whole Island of Great Britain" which was a lengthy Bill Brysonish travelogue in three volumes. During his tour of Yorkshire, he describes Halifax at the dawn of the industrial revolution at some length. 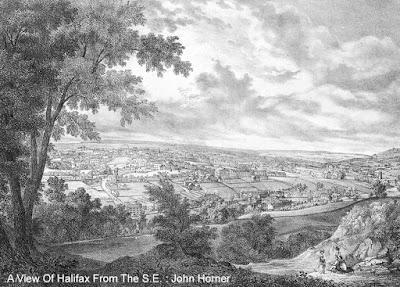 "...and so nearer we came to Halifax, we found the houses thicker and the villages greater...if we knocked at the door of any of the master manufacturers we presently saw a house full of lusty fellows, some at the dye vat, some dressing the cloth, some in the loom. .... those people all full of business; not a beggar, not an idle person to be seen, except here and there an alms-house, where people antient, decrepid, and past labour, might perhaps be found; for it is observable, that the people here, however laborious, generally live to a great age, a certain testimony to the goodness and wholesomness of the country, which is, without doubt, as healthy as any part of England." (Daniel Defoe, 1726).

But it is a thread nearer the hearts of Sepians everywhere that I have decided to follow - choosing to feature another icon with a dog on the sands in my main photograph. The icon will need no introduction to committed Sepians - it is Auntie Miriam herself, the pin-up girl of Sepia Saturday. I like to think that the elderly lady standing with her is Athena, the Greek Goddess of digital imaging, and that the dog playfully wandering in the background carries the spirit of my own dear Amydog (this is unlikely as Amy disliked the sand with an intensity that matched her love of boiled ham).

So once again, Sepia Saturday takes me on the kind of ridiculous journey which makes life interesting. Far from being deserted, my island is full of characters : my great grandmother and her husband; the lusty cloth dresssers of Halifax, Amydog picking the sand from her paws and, of course, the iconic Auntie Miriam.

FIND OUT WHO INHABITS THE DESERT ISLANDS OF OTHER SEPIA SATURDAY PARTICIPANTS BY VISITING THE SEPIA SATURDAY BLOG AND FOLLOWING THE LINKS
at December 04, 2015 16 comments: