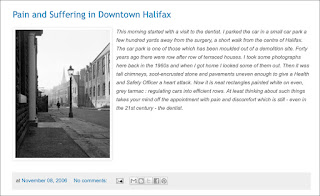 This was one of the first posts I ever put up on my blog, I posted it fifteen years ago in 2006.

This morning started with a visit to the dentist. I parked the car in a small car park a few hundred yards away from the surgery, a short walk from the centre of Halifax. The car park is one of those which has been moulded out of a demolition site. Forty years ago there were row after row of terraced houses. I took some photographs here back in the 1960s and when I got home I looked some of them out. Then it was tall chimneys, soot-encrusted stone and pavements uneven enough to give a Health and Safety Officer a heart attack. Now it is neat rectangles painted white on even, grey tarmac : regulating cars into efficient rows. At least thinking about such things takes your mind off the appointment with pain and discomfort which is still - even in the 21st century - the dentist.
It came to mind because .... this morning started with a visit to the dentist! Actually, in the intervening fifteen years the dentist has moved, even closer to the town centre. Whist waiting for pain and suffering in downtown Halifax Part II to commence, I took a walk, and, of course, took some photographs. 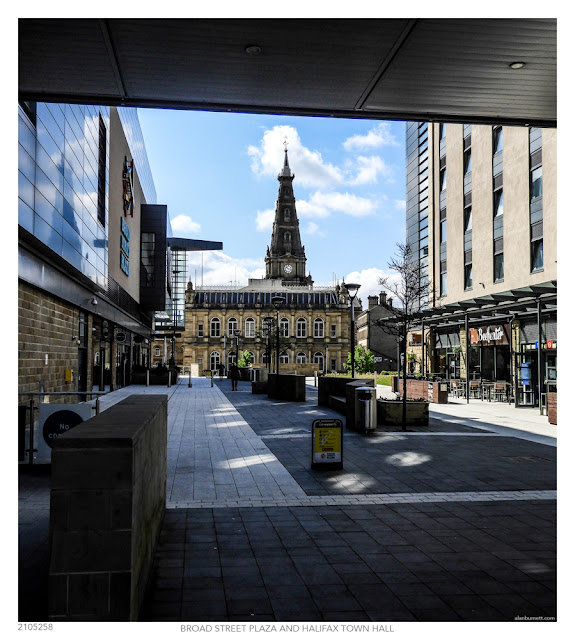 I took some photographs here back in the 1960s and when I got home I looked some of them out..... 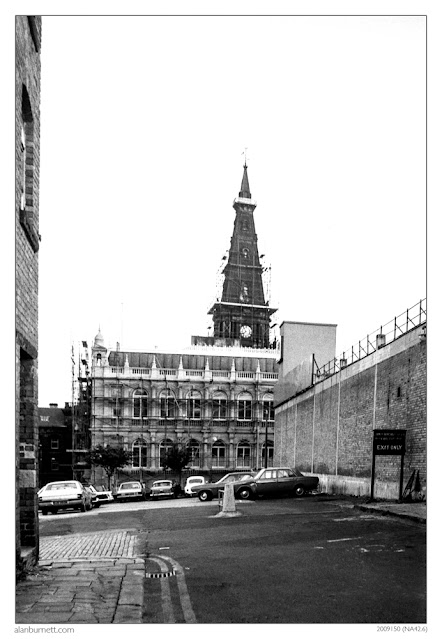 As it turned out, there was no pain and suffering on this occasion: the dentist took one look and booked me in for another appointment to do a filling in a few weeks time. Keep a look out for Pain And Suffering In Downtown Halifax Part III
at May 27, 2021 No comments: One of the least known of Henry Moore's monumental sculptures is his 1970 Reclining Figure which has been on permanent display in Halifax for the last fifty years. In order to overcome the civic antipathy to major arts projects, Moore cleverly disguised the sculpture as an overpass. 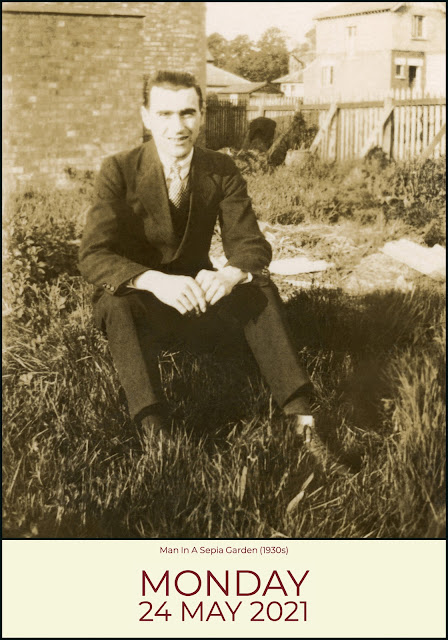 According to the GoogleLife App on my smartphone I have almost used up my allotted monthly allowance of words, and I'm running low on thoughts as well. So you'll have to make do with just this picture; which is a pity because I could have said a lot about it! 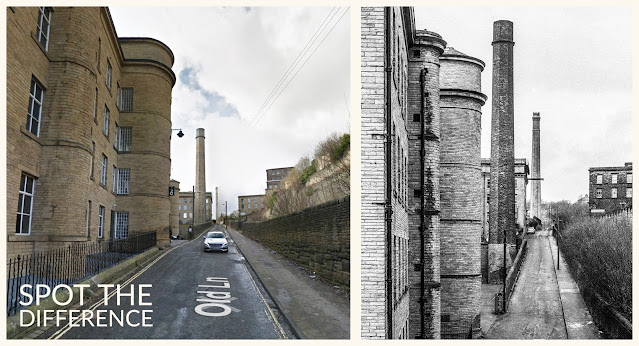 Social Media is full of memes proclaiming "You have an IQ of over 150 if you can spot the difference between these two pictures!" You don't need an IQ the size of Wainhouse Tower to spot the differences here, but you could probably host a seminar on the social, cultural and photographic differences on display. The first picture is a contemporary Google Streetview screen grab, the second was taken by me around 35 years ago, 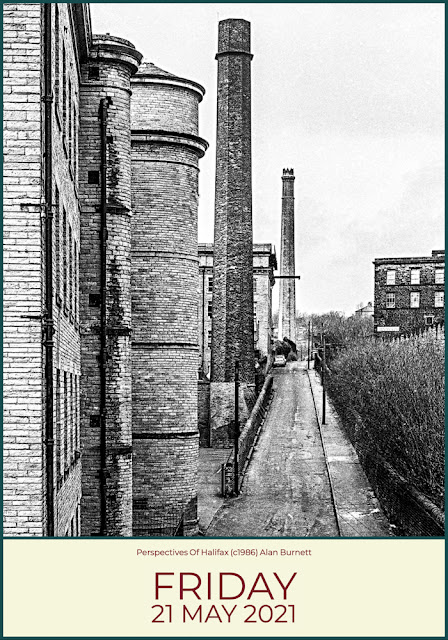 Another lockdown milestone. We went to the seaside yesterday, a day trip to Whitby to meet up with my son and his family who are spending a week there. Going for day trips to the seaside has always been a normal part of my life. As a child we would climb aboard my fathers' various vans and cars and visit Bridlington or Scarborough. When my son was small we would do the same, and even when more exotic locations turned our heads, we would still regularly undertake the two hour drive to the seaside. Lockdown brought an end to such adventures, and the forced separation from the salt-sprayed, vinegar-chipped British seaside only served to increase its attractiveness. It was great to see the family, it was great to be back besides the seaside.
at May 13, 2021 No comments:

A Return To The Shoulder Of Mutton 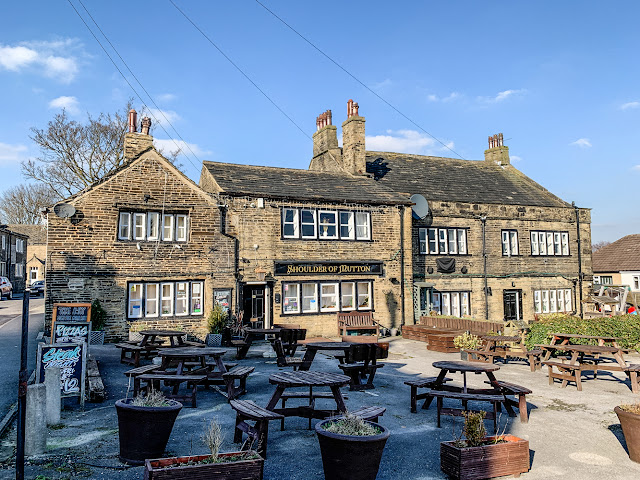 We took a walk yesterday down the Shibden Valley with some friends, and finished up at the Shoulder Of Mutton pub in Northowram, which was open for outdoor service. We had a pleasant drink and some excellent food and eventually the discussions got around to the pub itself and its history. Google eventually led me in the direction of a piece I must have written eleven years ago and completely forgot about. Even though I say it myself, it was worth a second read, and therefore I am giving it a second post.
FROM GREAT YORKSHIRE PUBS (2010)
The Shoulder of Mutton is situated in the village of Northowram, a couple of miles north of Halifax. This is the village I grew up in, and I remember passing the Shoulder many times as a child and wondering what secrets those child-free rooms held. For one reason or another, I never visited the Shoulder during that short window of opportunity between my looking old enough to get served in a pub and my leaving the village for ever. And so my recent visit to such a familiar landmark was my first to the pub. After offering up a short prayer to Bacchus for having kept the place open long enough for my visit, I gathered all my childhood memories around me and entered this fine Yorkshire village pub.
As you can see from my photograph, the pub spreads over three, conjoint buildings. On the right is the somewhat formal lines of what, in the eighteenth century, was known as Priestley Hall (built by Nathanial Priestley in 1723). The middle building - which was most likely originally a farmhouse - is probably the oldest and incorporates a stone lintel which is dated 1622. The building on the left looks as though it was grafted on to the farmhouse at some indeterminate date, long lost to memory.
And my impressions of the visit to the pub have almost been long-lost to memory as well, because I forgot to write them up when I returned home. So the following notes are taken straight from my notebook, but on re-reading them they seem to give an accurate taste of the place.
"Note the address - evocative: the phrase "Mutton Fold" should have a wider currency. How pleasant to discover a pub that has not been "themed". Tables and chairs look as though they have emerged over time rather than been imported from a warehouse. The beers are not too beery, there is a jukebox and there is a pool table. Some walls have been knocked down, but still possible to see the lay-out of the old houses set on different levels. Beamed ceilings, but not low beams nor over-ancient beams, nor fake beams. Pleasant but empty, like touring the British Museum on a wet Tuesday morning. You want people to be here, you want gossip, you want neighborly chatter, you want romance - you want life. There is music somewhere in the background : a pulsating bass line with tendrils of voice flirting with meaning. Is this ale making me poetic? If so the culprit is Timothy Taylor Golden Best : beery with distinct notes of beer. I shared the pint with a good honest packet of Seabrook's Potato Crisps and I am reminded that crisp must be one of the finest inventions of the entire twentieth century. Soon the pubs will be closed, the beer transformed into ice-cold tasteless lager, and crisps will be banned as junk food. Sad"
I may have got slightly carried away, but the Shoulder Of Mutton is a good, honest village pub and a visit there should be made a compulsory part of the school curriculum. If it had been so in my youth I wouldn't have had to wait fifty years to enter its doors. 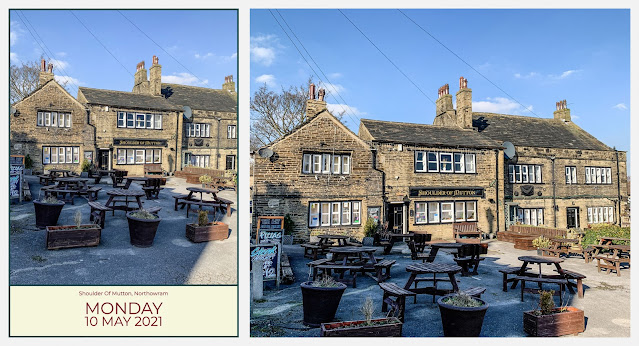 Shame About The Moral Philosophy 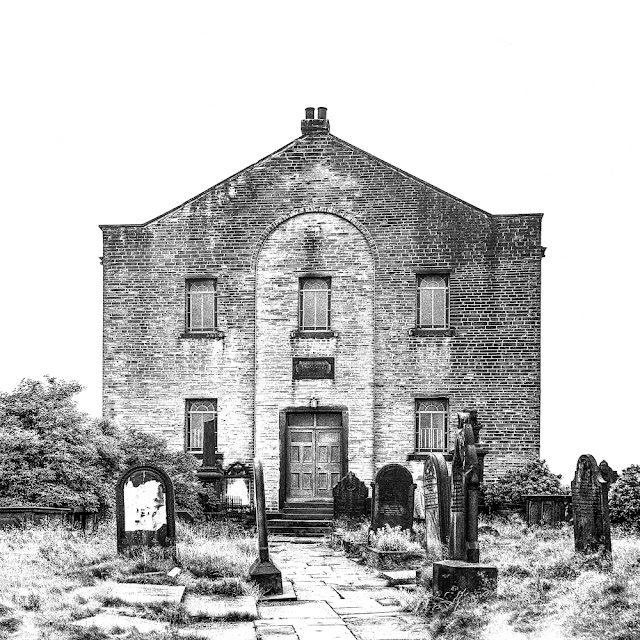 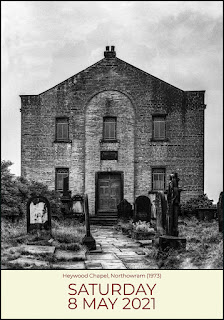 Although I was born in Bradford, I was raised in Halifax, and, in particular, in the village of Northowram. It was there that I first wandered the streets, looked at buildings and thought about the past. It was there that I went to school, rode my first bike, and took my first photographs. This particular photograph of Heywood Chapel in Northowram dates from about fifty years ago, by which time I had already moved away from the village. The building was, and is, so typically Northowram. In the 50s and 60s it was still rather stark, soot-stone set against pointless skies: stark. These days it is prettier, with its own little Close of neat houses and bungalows. The current building dates from 1837, although Oliver Heywood built the first chapel here some 160 years before that.

Being a Northowram Lad and having an interest in history, I have always believed that an effort should be made to understand Oliver Heywood, who must be one of the villages' most famous residents. His religious teachings are documented in five lengthy volumes, and, on more than one occasion, I have approached these with a creditable enthusiasm. Having now reached an age where I care less about what people might think about me, I have to, at last, declare that he was probably one of the most boring people ever to have walked up the Hough and along Towngate. Chapter after chapter he prattles on about sacrifice, sin and intercession - it's enough to make you want to call in the Shoulder Of Mutton and get legless.

The building, however, is nice. It's just a shame about the moral philosophy. 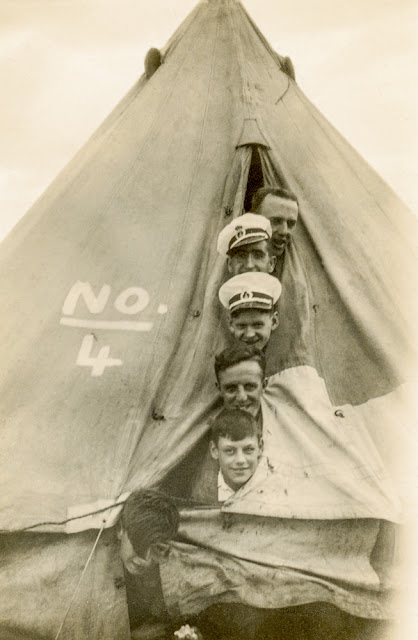 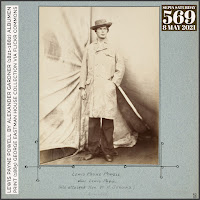 Our Sepia Saturday theme image this week features a man stood outside a tent. My contribution is six men  inside a tent - and to add to the numerical complexity of the situation, the tent is tent number four. The one man in the theme image was, it appears, Lewis Payne Powell, an American Confederate soldier who was part of the plot to assassinate not just President Lincoln, but also the Vice President and the Secretary of State as well. The six in my photograph have, I hope, a far less notorious pedigree.
My photograph comes from a box of unsorted family photographs and must date from the late 1920s or early 1930s. It certainly appears that the third head down in this collection of tented heads, has a strong resemblance to my father, Albert, and, as he would have been in his late teens at the time, the dates seem to fit. The confusing element is the naval cap he appears to be wearing: his only military service was in the Home Guard much later during World War II. My best guess that it was some kind of Boys' Brigade or Sea Cadet camp, and the tent was pitched on some spare ground far from the sea, somewhere around Bradford.
But who knows! Family histories are delightfully full of gaps and holes. Maybe my father was part of a conspiracy to kidnap Stanley Baldwin, the British Prime Minister at the time. Who knows!
This is a Sepia Saturday post. To see other Sepia Saturday contributions, go to the Sepia Saturday Blog and follow the links. 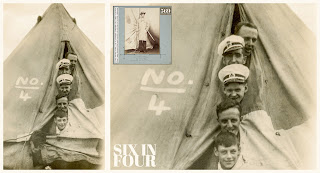 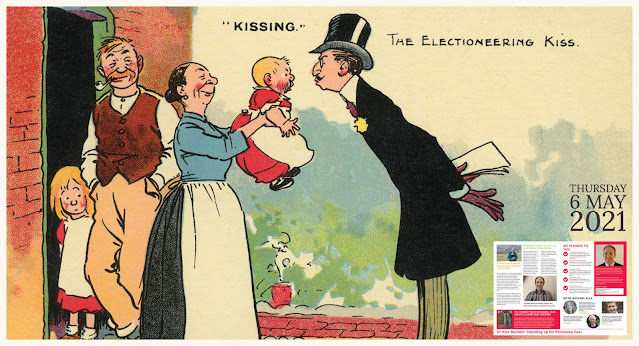 It's Election Day. Good luck to all the candidates out there - well, to the ones who believe in compassion and fairness, at least - and, in particular, my best wishes to a certain candidate in Penistone East - I'm proud of you, son!
at May 06, 2021 No comments: