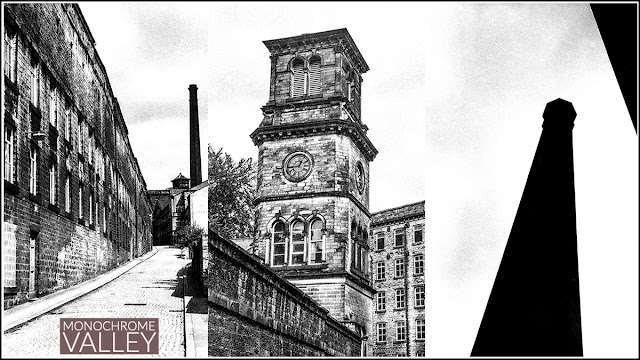 In reviewing my old negatives, it appears as if I spent a large part of my youth walking up and down Shaw Lane in Halifax. Here is a triptych of views from a strip of negatives shot in the 1970s. I am particularly fond of that final image - it sums up so much about the Halifax of my youth. 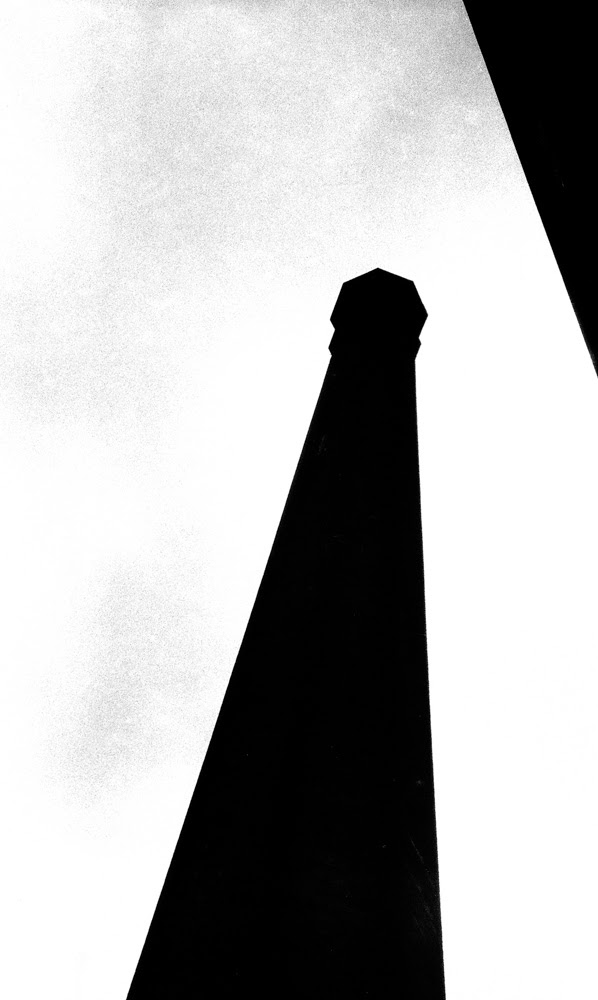 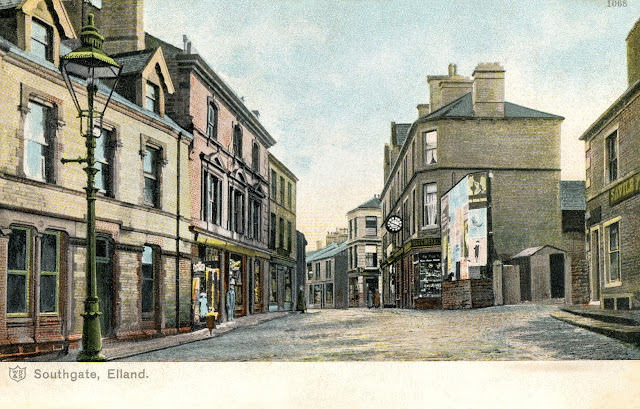 In some ways the centre of Elland has changed little since this photograph was taken 100 years ago, whilst in other ways it has changed so very much. The Saville Arms is still open, and still dispensing beer, but the bank opposite has stopped dispensing cash and many of the shops stand empty. The clock has gone and so have the cobbles, but the scene is still instantly recognisable. 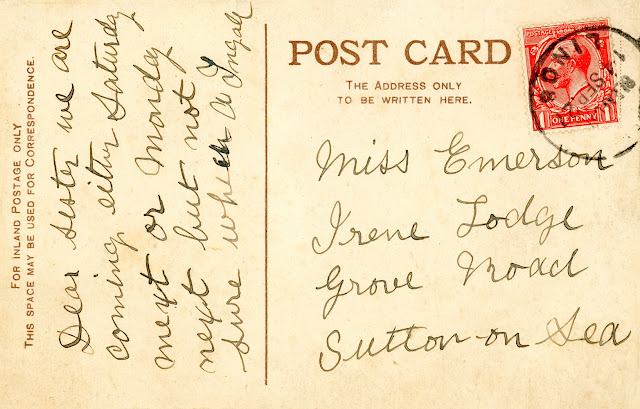 The card was posted in Lincolnshire and it contains a somewhat uncertain, and rather formal, message :-

Dear Sister, We are coming either Saturday next or Monday next but not sure which, A Ingall.


Hopefully Mrs Ingall managed to get to see her sister in Sutton-On-Sea. Hopefully the people of Elland will get to see commerce thriving again in these buildings in due course. 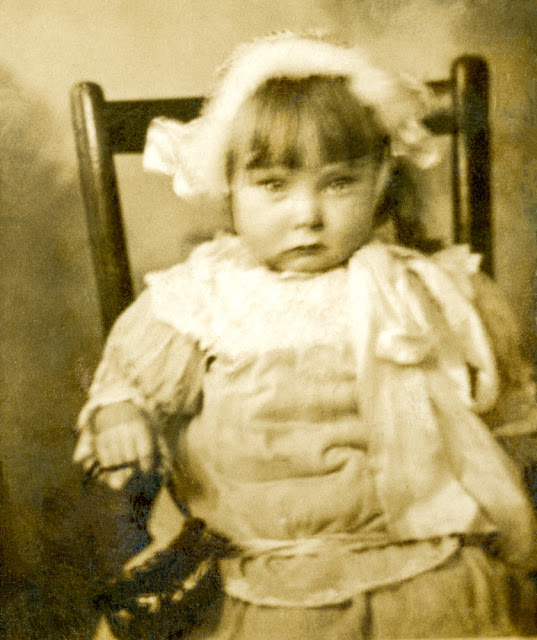 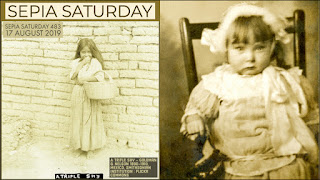 The Age Of The Smile

Smiles - smiles on photos, at least - were a twentieth century invention: smiles on the faces of the subjects of Victorian photographic portraits are as rare as Trumpian truths. The reason was partly that Victorian cameras could only cope with fixed expressions - but it was also partly that they tended to be a miserable lot. By the 1920s and 1930s, people were more relaxed, and smiles began to appear, and this added a welcome layer of humanity to photographs. Once you achieved the technological ability to instantly see - and digitally enhance - your photographic image, things started to become unreal again, with blemishes banished and pouts propelled to prominence. For a few decades, however, photographic smiles reflected something like real joy and honest emotion. It was the age of the smile.
at August 15, 2019 3 comments:

A Case Of Municipal Pride 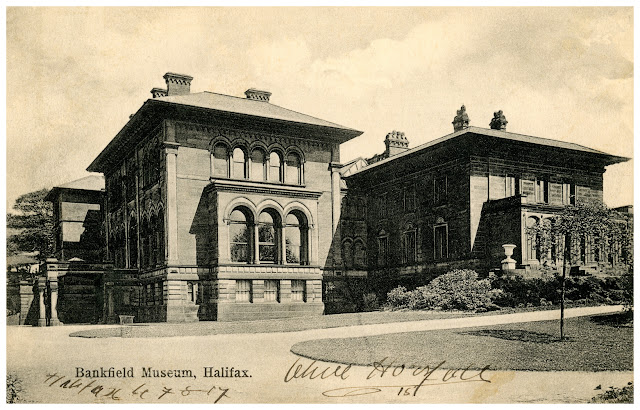 Back in the early twentieth century, when picture postcards were all the rage, the subjects reflected what people saw as important, what they were proud of, what - to them - represented their home towns and villages. There were, of course,  many pictures of celebrity music hall stars and vacuous views of pretty nothingness; but there were also grand public buildings - town halls, churches, and museums. There was a municipal pride that seems to have sadly evaporated as the twentieth century gave way to the twenty-first. 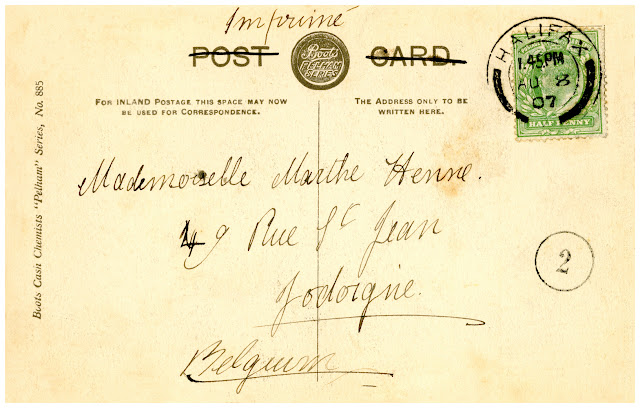 So if you were writing to a Belgium beauty from Edwardian Halifax, what better image to send her than one of the finely proportioned Bankfield Museum. The subtext doesn't seem to say, "look at the fine homes the rich and famous can live in", but, "look at what we can create together when we are proud of our collective history".
at August 13, 2019 1 comment:

Monochrome Valley : Finding Myself In Northowram 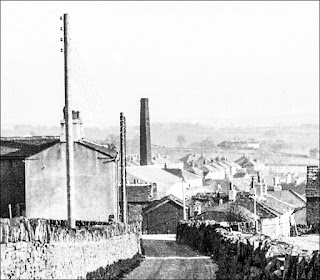 I solved the mystery when I eventually recognised the house I grew up in and remembered that there was a tall chimney to the side of the old Crown Brewery building on Bradford Road, where the tannery used to be. The brewery is long gone along with its various buildings and chimneys, and therefore it was difficult to confirm that this was the chimney in question. I went on-line to try and find information about a mill and its associated chimney, but the only two I could find mention of were well out of the village centre. I eventually found confirmation when a Google search threw up an old photograph of the brewery building with clear evidence of a large chimney next to it. Clearly my memory of the village of my youth is beginning to fade with age - and this was confirmed when I discovered that the old photograph that confirmed the presence of a chimney was one of my own!
at August 12, 2019 1 comment: 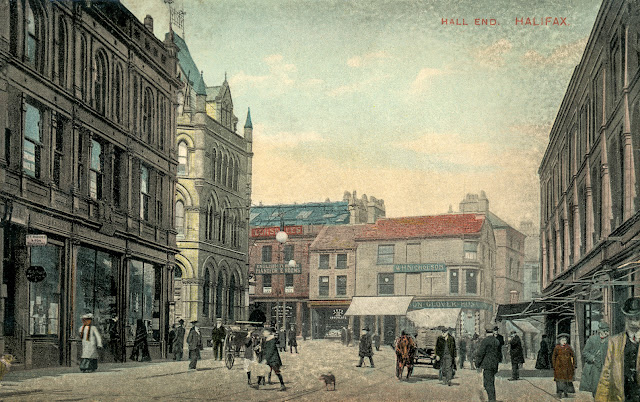 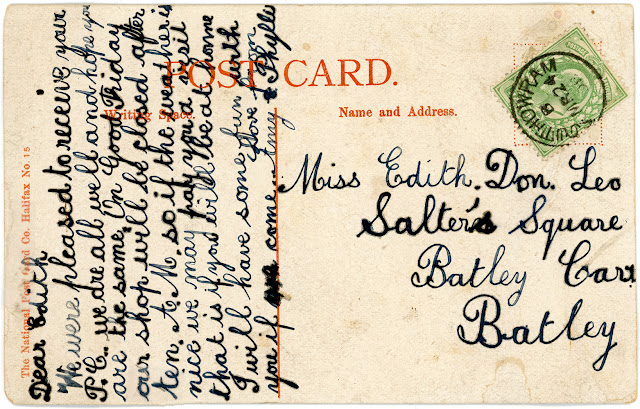 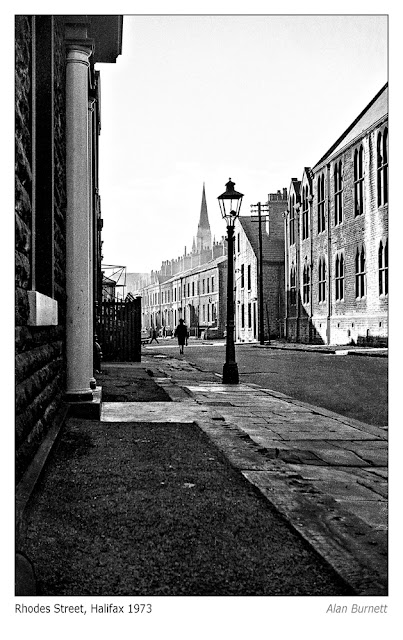 According to my records - which are about as accurate as a Prime Minister's promise - I took this photograph of Rhodes Street, Halifax in 1973. To me that sounds like only yesterday, but I suppose it is history. It is the year that I moved to London, and the walk down Gibbet Street might have been part of some farewell tour of the town of my youth. It would be twenty years before I moved back to the area - and a lot changed in that time. 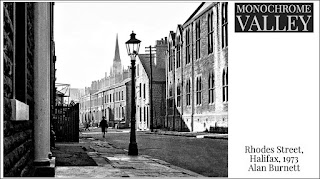 A Pint At The Shibden Mill Inn 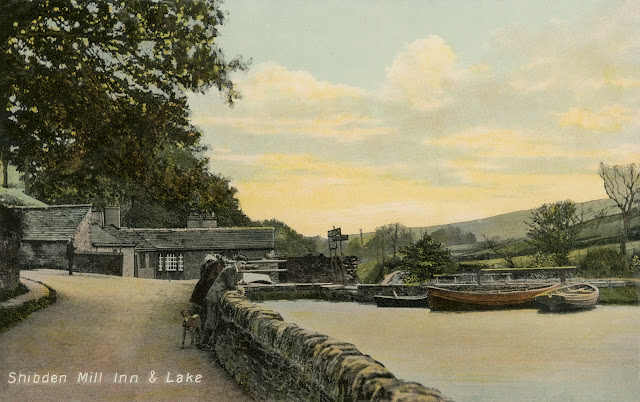 There are few pleasanter spots to enjoy a pint of beer on a summers' evening than the Shibden Mill Inn, and that has been the case for the best part of two hundred years. This particular postcard dates from the early part of the twentieth century (the postmark is, I think, 1910) and shows the Inn complete with a boating lake. This lake was the old mill dam which had been used to power the mill wheel of the centuries-old corn mill. The old mill had closed during the nineteenth century and a beer house established in the millers' house. The dam-cum-boating lake was eventually drained in the early twentieth century, not too long after this photograph was taken. 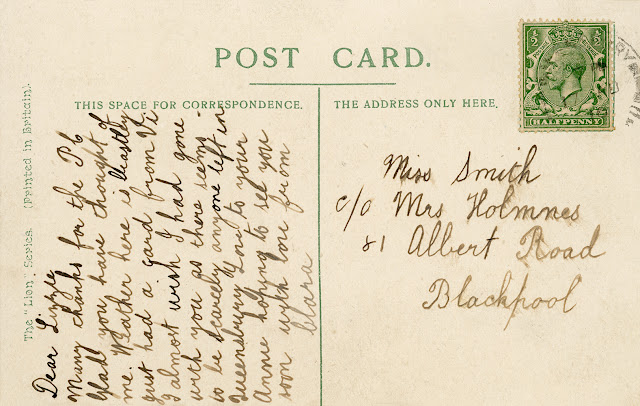 The card was sent by Clara to her friend Lizzie Smith in Blackpool. It was posted in Queensbury in what looks like 1910. The message reads as follows:-

Dear Lizzie, Many thanks for the P.C. Glad you have thought of me. Weather here is beastly. Just had a card from Vi. I almost wish I had gone with you as there seems to be scarcely anyone left in Queensbury. Love to your Annie. Hoping to see you soon. With love from Clara.

Even though it was written over 100 years ago, the feelings expressed are familiar to us all. It is the middle of summer and all your friends have gone to the seaside on holiday. You are left back in Queensbury and the weather has turned beastly. There is no alternative Clara - get yourself down to the Shibden Mill Inn and enjoy a good pint. 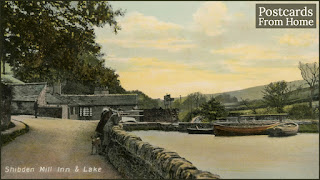 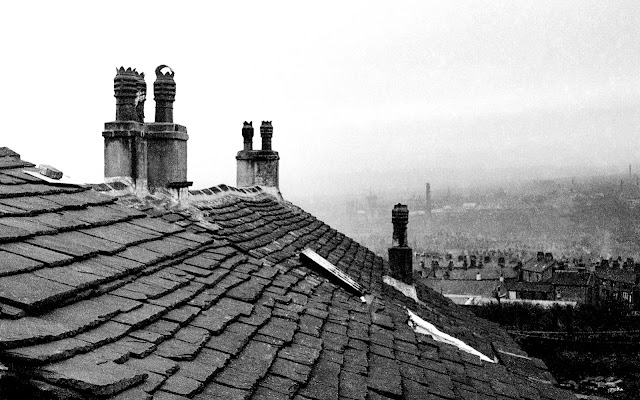 I'm not sure exactly where or when I took this photo, but - this is a Halifax roof. Unconventional, different, with a twisted sense of humour. Well worn, hard worked - but as strong as a stone quarry. 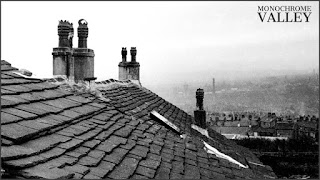