A Decisive Moment Outside The British Museum

It was the great French photographer, Henri Cartier-Bresson, that described photography in terms of the "decisive moment": the ability of the camera (especially of the new lightweight cameras of the 1930s and 40s) to capture a precise moment in time and demonstrate that, in one way or another, all moments are decisive. I know that I tend to complain a lot about the modern trend of the ubiquitous lens - the grafting of digital cameras onto everything from mobile phone to false teeth - but it has to be recognised that the phone-camera is a perfect vehicle for the decisive moment approach. Had Cartier-Bresson been alive today, he would no doubt be skipping around with an iPhone in his hand.

But good, old fashioned gelatin film of a certain age had an advantage over the digital image in that, once developed, it was cut into strips. And if you are lucky and the negatives were kept, the strips still remain and individual shots are tied to their neighbours with a solidity that even Christian Grey would have approved of. Thus, if you look at a negative strip rather than an individual photograph, you have something more that a decisive moment, you have a passage of time.

The above strip of negatives dates back to the 1970s when we were living in London. For whatever reason, I was out with my camera and this particular sequence starts with me down by Tower Bridge taking a photograph of what was a favourite subject forty years ago and remains so to this day - a brewery. The brewery in question, for those interested by such things, is the old Courage Anchor Brewery which has since been converted into a complex of disgustingly over-priced apartments. For the second shot I have simply turned ninety degrees to the right and looked up river, incorporating the bridge and the River Thames. 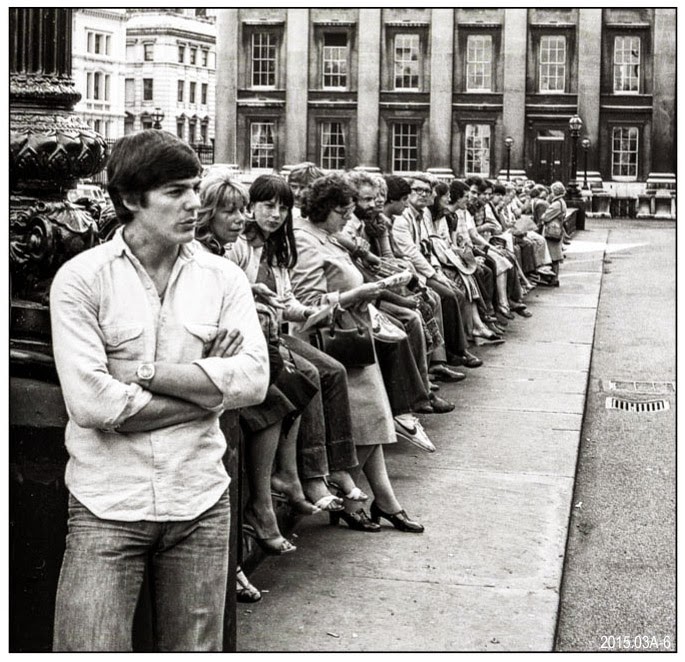 There must have been a fair amount of walking before the final shot was taken because it features a crowd outside the British Museum in Bloomsbury. I can't recall if I went in the museum or just grabbed a decisive moment outside, but the negatives together help me recall a day rather than just a fraction of a second.
at March 02, 2015