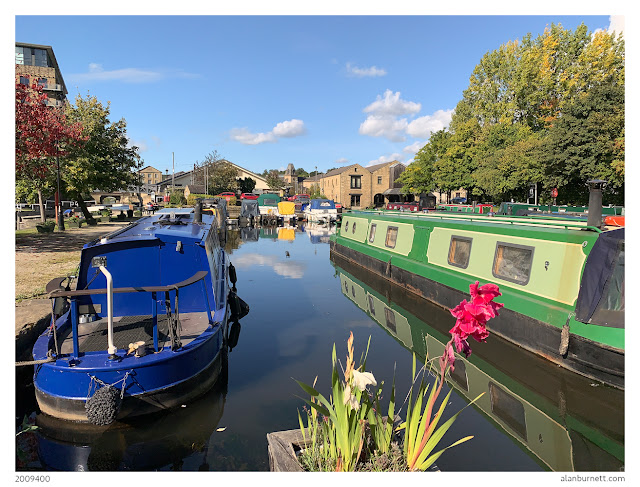 The canal basin was looking glorious in the sunshine. A few late flowers added to the colour provided by the moored barges, whilst the leaves on the trees were taking their cue from the stone-browns of the old mills and warehouses. Old fools such as me, spend too much of our lives complaining about all that has been lost, without acknowledging the positive aspects of planning and architectural developments over the last half century.  The Brighouse Basin of my youth was a sad and forgotten place, as lacking in colour as the monochrome prints of it that survive. 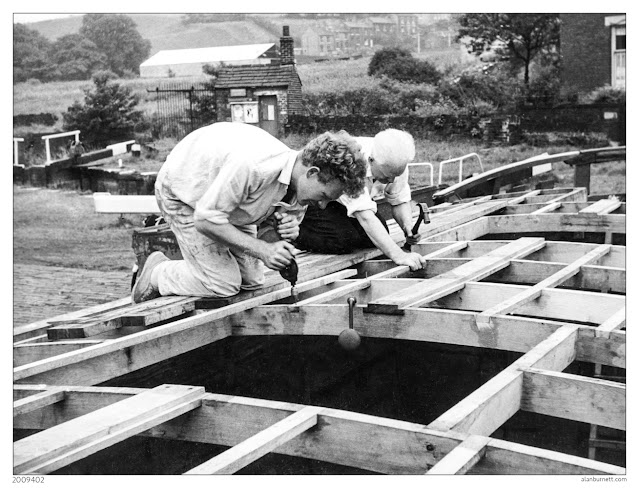 By chance, one such print worked its way to the top of my scanning pile yesterday. I think the photograph was taken in the basin, and I think I was the photographer, and I suspect that it may have been sometime around 1967. My brother - who is pictured along with my father woking on the conversion to his boat Brookfoot - will no doubt read this post on his far-off Caribbean island and correct me on the dates and locations as necessary. He won't be able to correct the description because it is written on the back of the print in his own hand, and it reads as follows:  "Fixing the longitudinal members in position with "Gripfast". My father is also shown in this photograph lending a hand". It seems that the photograph may have been submitted for publication as part of an article my brother was writing on his conversion of the old Yorkshire Keel barge. If that was the case, and if it was my photograph, I am obviously due some royalties, even after this lengthy period of time. You know where to send the money to, Roger!
at September 30, 2020