It Didn't Do For Mrs Read

Vintage picture postcards sent during the great postcard craze of the first decade of the twentieth century not only provide us with a picture of the physical landscape of our towns and villages at this transformative moment in time, but they also provide us with an insight into the everyday lives of the ordinary people who sent and received them. Such cards are an exercise in historical voyeurism, and all the more fascinating for that: they are instagram messages from a bygone era. 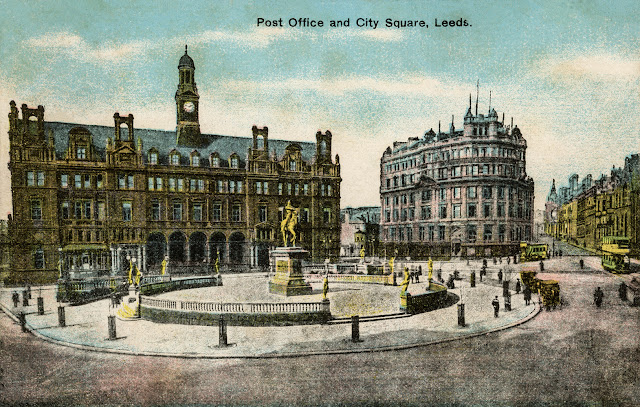 This particular postcard shows City Square in Leeds and provides a prospect which will be familiar to those who know Leeds in the twenty-first century. The post office building, thankfully, remains largely unchanged - although you are more likely to get your lunch there these days than to post a letter. The Black Prince still trots motionless in the centre of the square and, no doubt, still wonders what on earth he is doing in Leeds.  These days there are some additional concrete sore thumbs and a good deal more traffic, but the picture side of the card doesn't raise any unanswerable questions. 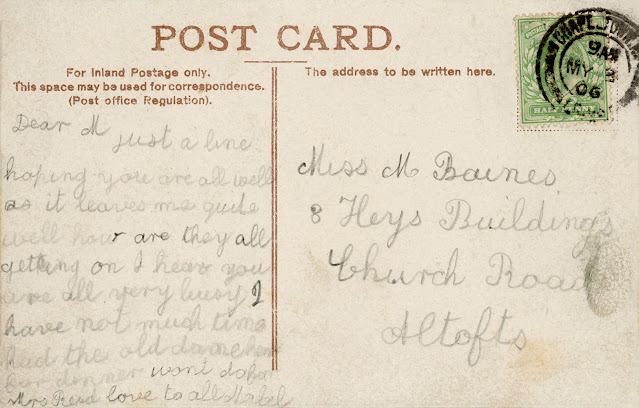 Turn the card over and you are immediately reminded that the idea that in these good old days children were taught to write neatly, spell correctly, and punctuate properly is just another of those urban myths. The card comes from Mabel to her friend Miss M Baines, who lives in Altofts on the outskirts of Leeds. The message reads - as far as I can tell - as follows:-
3rd May 1906 : Dear M just a line hoping you are all well as it leaves me quite well how are they all getting on I heare you are all very busy I have not much time had the old ------ for dinner won't do for Mrs Read love to all Mabel.
The missing word is indecipherable and could be anything from damselle to Devon hen, and probably a lot in-between. Whatever they had for dinner probably didn't do for Mrs Read, but there again, whatever will?
at July 15, 2021