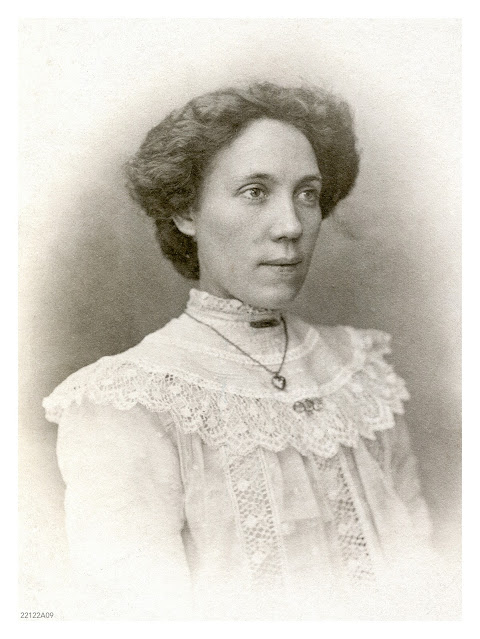 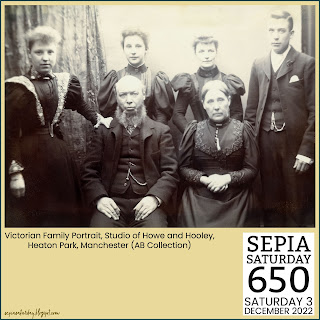 For twelve years now, Sepia Saturday has been providing a digital meeting place for lovers of old photographs. Each week, a theme image is either followed, adapted or ignored by participants. Sepia Saturday is a bit like that: the old photos don't need to be in sepia nor do they need to be shared on Saturday. This week the theme image shows an unsmiling Victorian family, and my own contribution features an unsmiling Victorian lady.
When did people start smiling for photographs? Look on Facegram or Instabook and you are bombarded with smiling faces, but flick through a Victorian photographic album and faces fixed with seriousness is the order of the day. Perhaps it was a necessary response to the slow shutter speeds of the early cameras - it is easier to hold a fixed frown than it is a fleeting smile. Maybe it is that photographs in those days were special things; rare artefacts that would be handed down through the generations, and you wouldn't want your great-grand nephew's second cousin to think you were a flighty lightweight. Perhaps it was that they were just miserable!
We will never know. Nor will we ever know who this unsmiling lady was. She was a member of our family - perhaps shew was my second cousin's great-grand aunt - as here portrait was lodged in the family archives (a.k.a. the old shoe box kept at the back of the wardrobe).  Whoever she was, I have but one message - cheer up, love!
OTHER SEPIA SATURDAY POSTS CAN BE FOUND BY FOLLOWING THE LINKS ON THE SEPIA SATURDAY WEBSITE
at December 03, 2022