The Top Of The Scree Slope

"This must be the top of the scree slope and therefore that ..." Mark used his copy of Wainwright's "Central Fells" as a pointer ... "must be Stickle Tarn". As far as I could make out my friend, companion and guide for the day was pointing into the hazy distance. Any possibility of seeing the promised tarn was excised by the slightly inconvenient fact that there was a rather large mountain in the way. 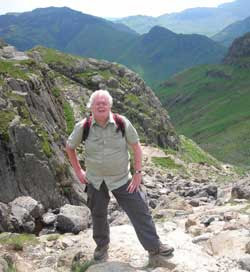 We had been walking for an hour, although "walking" seems a rather tame description for the lung-sapping, muscle-straining, joint-breaking process of climbing wave upon wave of granite stones which seemed to have been dumped down the side of the mountain with an abandon that should have landed the Lake District National Park authorities in an endless loop of litigation. "An health and safety inspector would have a field day with this", I gasped to myself as yet another stone gave way under my booted feet, causing me to collapse to the ground and the poor fellow about half a mile further down the mountain to dive for cover.
We turned a corner and saw another scree slope and no sight of the promised tarn. Mark adopted a good humoured resignation: "Ah well, it can't be much further now", and with a burst of commendable energy he shot ahead, taking up his position about 50 yards ahead of me. From such a position he tested out the route ahead of me and regularly shouted back instructions. "Take the right-hand path, it's easier", "watch out for the rocks here, they are very loose", and on one memorable occasion "take the top path but look out for the dead sheep stuck in the crevice". Every so often I would see him heave his considerable rucksack to the ground and consult his Wainwright, and I might be able to grab a few minutes rest.
What the rucksack contained I did not know, but judging by its size and the complexity of pockets, tubes and straps it was a serious piece of kit. I had a suspicion that it might contain a defibrillator for I had noted many a whispered telephone conversation between my wife and Mark in the days leading up to our mountain adventure. She was fairly certain I was going to die during our attempt to conquer Harrison Stickle (2,403 ft) and had consequently got me to point out where all the important household papers were kept in my filing cabinet before I set out. Not that I blame her, a sturdy background of practicality is essential to the breed specifications of any half-decent Yorkshire lass. And this was a big bloody mountain. And I was still on the wrong side of the obese/overweight border. And we had not yet reached the top of the scree slope.
What was really annoying was that every time we rounded a spur and caught a brief view of the mountain stretching further up towards heaven, at the very limit of my vision I am sure I kept seeing an elderly lady in a wheelchair. But surely this couldn't be. This was serious walking country. Even the sheep were having difficulty keeping upright. But dammit, there she was again. I mentioned it to Mark and he shook his head with the kind of sad expression that only experienced GP's can muster. He went back to consulting his pocketbook, but whether it was Wainwright or "Common Psychological Symptoms In General Practice" I am not sure. He probably had half a library in that rucksack.
As he cross-referenced hallucinations with breathlessness, I gazed back down the mountain. It was a glorious day, the kind of day you are not supposed to get in the English Lake District. The scenery was spectacular and to view in from up here made you realise why gods have such a superiority complex. The expedition was part of my 60th birthday present and I felt rather proud that I had got this far. And - on the assumption that I lived - the rest of the present included dinner in a fine Lakeland Inn, as much real ale as I could drink, and a night in a First Class Hotel. The breathlessness seemed to pass. The vision of the wheelchair-bound old lady acted as a lure rather than a jibe. I forced myself to my feet again, rounded the next bend and, instead of the scree-slope, saw Stickle Tarn ahead of us. Mark quickly consulted AW again, beamed and said "That's it, that's Stickle Tarn. According to Wainwright that means we are halfway up". 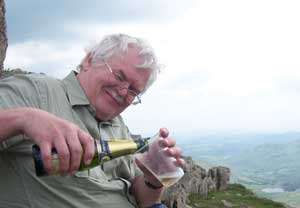 AFTERWORD
Of course we made it and eventually reached the top of Harrison Stickle (2,403 long, bloody ft). As we rested on the summit I discovered the secret of Mark's oversized rucksack : a bottle of champagne and an equally welcome bar of chocolate. The descent was even more exhausting than the ascent, but it was followed by a most delightful evening sampling good beer and rare malts. As we returned to Yorkshire the next day I could reflect on the fact that I had achieved at least one of my birthday ambitions.
at June 08, 2008