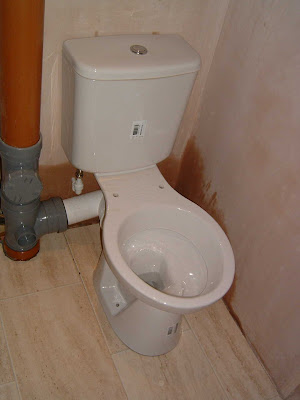 Whilst AB is still on his way back from Gibralter, I thought I'd sneak this in. Loo "1" in our development house, not yet fixed to the floor or with a seat, but plumbed-in in the sense it flushes and the waste goes to the sewer. Or... not. Builder Alan mobiled me shortly after I took this triumphal picture to say he'd suddenly discovered he'd left a test "bung" blocking the output of the sewer-trap, which had conseqently filled to over-flowing for testing the flush. (Only that, so only water!)

Note that the floor actually has its final laminate on it, but there's no wainscote, yet. Nor paint on the new plaster on the walls. (The plaster looks wet because first test the water coupling on the left fell off when I went to tighten it. These teething troubles....)

But the photo represents more. The loo is in an internal bathroom... it's lit by low voltage shower-proof lights. And although you can't hear it, the extractor fan is going. It also represents that the upstairs flat is not that far short of getting its (identical) loo fitted soon, as well!