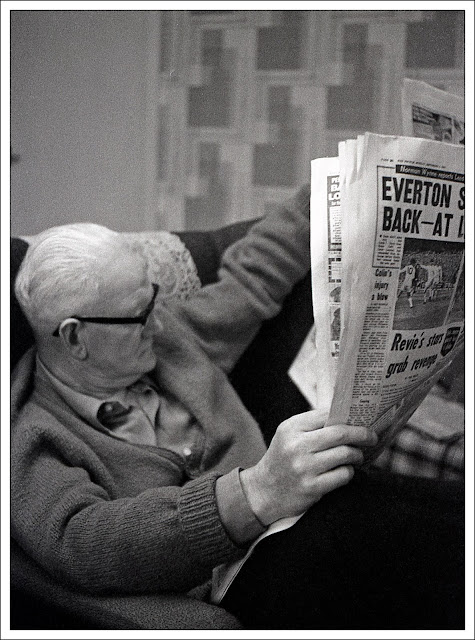 The one advantage of taking photographs featuring people reading newspapers is that you have a good chance of dating them when you come to look through your collection of old photographs a lifetime or so later. That is particularly the case with our Sepia Saturday archive photograph this week : which features a group of readers discovering that man had finally reached the moon. That one small step for man back in July 1969 wasn't too far away (in time) from when my photograph was taken. I can't precisely pin down when Revie's stars grabbed revenge, but Don Revie was manager of Leeds United Football Club until 1974 and if they were playing Everton in what was then the First Division, it must have been the late 1960s or the early 1970s. My photographs features my father, Albert, catching up with the news. The name of the reporter writing about that Leeds v Everton match allows me to identify the newspaper - the Sunday People. The People was still a broadsheet when my photograph was taken so I need to try and track down when it changed to its current format of a tabloid. But at least I have been able to discover which newspaper it is; that's a start - just one small step for a man.