If you are wondering why my blog posts have been as infrequent as common sense emerging from the Brexit campaign, it is because it is coming around to the time when we are off on holiday and I am suffering from my usual attack of pre-departure tension. At such times my mind as an attention span as limited as Donald Trump's analytical prowess,  and as soon as I start to think about a blog post my thoughts are dragged away to contemplating such thorny questions as which shoes I should pack, and is it necessary to take a compass with me in case the ship gets lost. In the absence of anything meaningful, I thought I might share a few random thoughts with you. 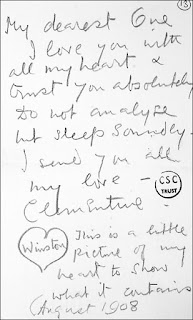 CHURCHILL"S MANSERVANT
Each morning and evening, as I walk Lucy, we listen to the radio (via the quite excellent BBCi Radio Player) and, over the weeks since she has been with us,  we have developed an approach based on mature compromise and mutual respect in terms of the choice of what we listen to. As our walks tend to be about half an hour in length, she chooses what we listen to for the first, outward, fifteen minutes and I choose what we listen to for the return leg of our journey. Whilst my current choice is the reading of Fitzgerald' wonderful Great Gatsby, Lucy - for reasons best known to herself - has chosen the love letters of Winston and Clementine Churchill (I suspect it might have something to do with the way Clemmie calls Winston "her pug").


There was a wonderful line in one of the love letters the other day which somehow spoke volume of the kind of world that existed in England at the start of the twentieth century. It was 1908 and Winston had been staying at a country house weekend party when a fire had raged through the building causing considerable destruction. Clemmie had written to immediately to reassure herself that he was safe. Winston replied that he was, and his various possessions were safe as well as:  "I exercised a marvellous presence of mind and got my manservant to throw them out of the window". I tried to explain to Lucy that this perfectly encapsulated the master-servant relationship:  but she was more interested in a twig she had found. 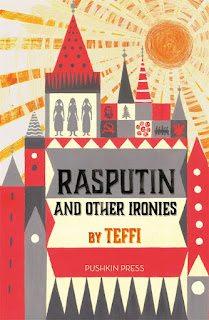 INVADING RUSSIA
Part of my forthcoming holiday will take me for the first time to Russia - we call in at St Petersburg for a couple of days. One of the great joys of holidays is planning the composition of the inevitable "holiday book-bag" which has not totally been made redundant by the omniscient Kindle.  I discovered the early twentieth century Russian author, Teffi, the other day (again via an excellent Radio adaptation of some of her stories) and I have ordered another of her collections "Rasputin and Other Ironies" to take with me. Whenever Teffi got into trouble with the Russian authorities 100 years ago, she could always rely on the fact that both the Tsar and Lenin were great fans of her writing. I am not too sure how she is viewed in the current political climate or whether recourse to either of her celebrated fans will be efficacious, so I might make myself a brown paper cover for the book, like we used to have to do with our schoolbooks. 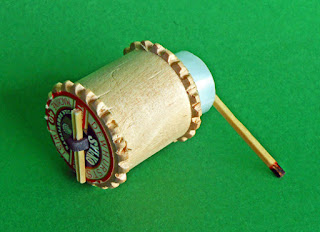 COTTON REEL TANKS
And talking of schooldays, I got into a discussion with a friend over a very pleasant pub dinner last night about those cotton reel tanks we used to make as kids. As we reminisced about their construction and our success in creating Formula 1 winning cotton reel tanks, the competition intensified. And so we decided to put our boasting to the test and have a race-off in a couple of months time once we have designed, built and tested our entries. In the cold light of sober day I worry that my boastfulness may have run a little ahead of my technological expertise and my ability to remember how the wretched things are made. There will no doubt bye a YouTube instructional video, but in the meantime, has anyone got any old fashioned candles?