Our random number generated time machine has whisked us back to the start of the 1930s and made a landing alongside the Humber Estuary near the city of Kingston-on-Hull. We can't see the magnificent Humber Bridge because it is still forty years in the future, but the port of Hull is full of deep sea trawlers although the fishing industry, like all others, is suffering from the great economic depression.

Economic problems and their political implications dominate the national, and international, news. The Labour Government had just fallen and been replaced by a National Coalition and the decision of the Labour leader, Ramsey MacDonald to participate in the coalition had split the Labour Party. Our window on history is provided by the pages of the Hull Daily Mail. 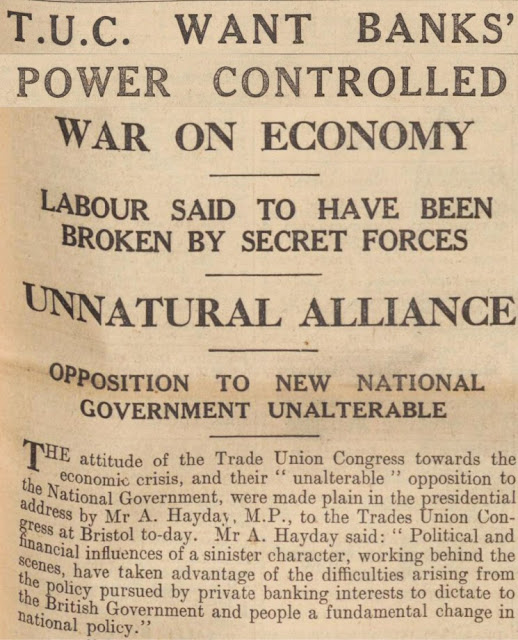 TUC WANTS BANKS POWER CONTROLLED
WAR ON ECONOMY
LABOUR SAID TO HAVE BEEN BROKEN BY SECRET FORCES
UNNATURAL ALLIANCE
OPPOSITION TO NEW NATIONAL GOVERNMENT UNALTERABLE
he attitude of the Trade Union Congress towards the economic crisis, and their "unalterable" opposition to the National Government, were made plain in the presidential address by Mr A Hayday MP, to the Trades Union Congress in Bristol today. Mr Hayday said: "Political and financial influences of a sinister character, working behind the scenes, have taken advantage of the difficulties arising from policy pursued by private banking interests to dictate to the British Government and people a fundamental change in national policy”.

There is something remarkably familiar about the lead story in the Hull Daily Mail on this day: the power of the banks, economic crisis, a fundamental split in the Labour Party - history may not actually repeat itself, but in tends to wander along familiar pathways! And what the writer of this article didn't know was that this was just the beginning of the crisis. Within a few days the new National Government had devalued the pound, cut the wages of government workers and reduced benefits to a minimum. A long, long economic recession was awaiting Hull, and the rest of Britain, in the 1930s

AMY DELAYED
Bad Weather Keeps Her At Koenigsberg
HOPE OF START TODAY
Berlin, Monday
Unfavourable weather prevented Miss Amy Johnson, who is on her way home from Tokio, from leaving Koenigsberg, East Prussia, at five-o-clock this morning as she had intended. She proposes to start at noon on a direct flight to Hanover, which she expects to reach in four or five hours. Miss Johnson has with her a Siberian pup with which she was presented in Moscow.

Amy Johnson was one of the great British heroines of the 1930s. Born in Hull, she worked as a secretary in a solicitor's office before getting her pilot's licence in 1929. She them embarked on a series of record-breaking flights, becoming in 1930 the first female pilot to fly alone from Britain to Australia. In July 1931 she had undertaken a series of record-breaking flights to Tokyo and Moscow and she was returning from these when she was delayed in Konigsberg (now known as Kaliningrad). She did manage to leave Konigsberg later that day and she eventually returned safely to the UK. The following year she married fellow pilot Jim Mollison and during the rest of the decade she continued to undertake record-breaking aviation flights.

At the outbreak of World War II she volunteered for the Air Transport Auxiliary and was responsible for moving RAF planes between bases in the UK. In January 1941 she went missing during one such flight. 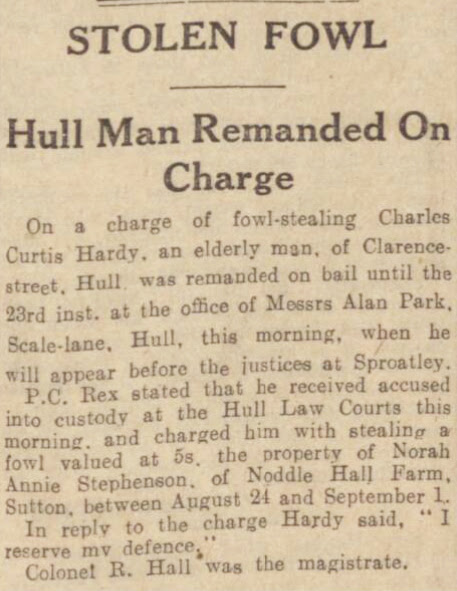 The surprising thing about the case of Charles Curtis Hardy is the fact that fowl-stealing was still a specific offence in British law in 1931. I am not sure what sentence he eventually received, let us hope it is not as severe as a certain William Ansell of Bedfordshire who was transported to Australia for 7 years for fowl stealing a hundred years earlier. 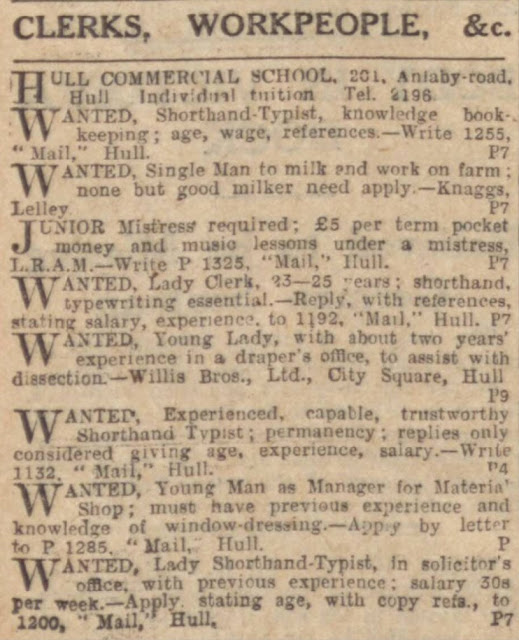 The situations vacant columns of local newspapers always provide a powerful economic and social commentary on the state of a local community. Here we see that, whilst there are still jobs available, they tend to be of a specialist nature and - in the majority of cases - for women workers. New skills were at a premium, and in these times shorthand writing and typing were very marketable skills. It is interesting to note that a "Lady Shorthand-Typist" could expect to earn 30s (£1.50) per week, whilst a junior mistress at a school was lucky to be getting £5 per term.

The newspaper situations vacant columns were of little use to the vast numbers of unskilled working men that were being thrown out of work by the Great Depression. In 1931 there were more than 15,000 unemployed men in the city of Hull, men who had little hope or opportunity of finding work for much of the rest of the decade. 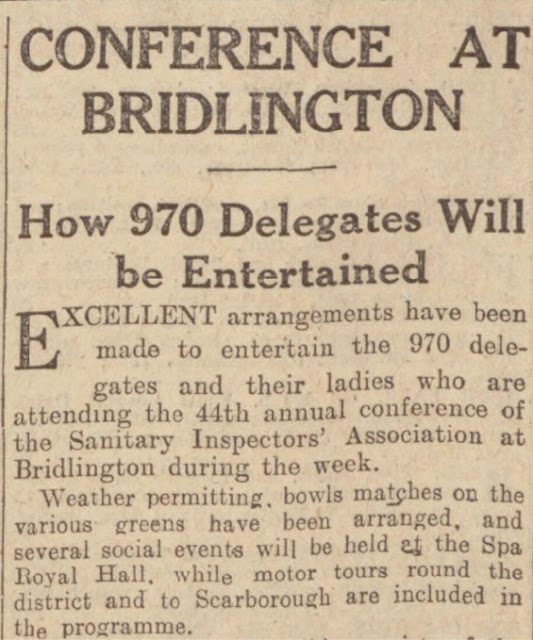 CONFERENCE AT BRIDLINGTON
How 970 Delegates Will Be Entertained
Excellent arrangements have been made to entertain the 970 delegates and their ladies who are attending the 44th annual conference of the Sanitary Inspectors' Association at Bridlington during next week. Weather permitting, bowls matches on the various greens have been arranged and several social events will be held at the Spa Royal Hall, while motor tours round the district and to Scarborough are included in the programme.

The 970 Sanitary Inspectors hopefully had a good week at Brid and between the games of bowls and motor trips to Scarborough had time to examine the state of public health in the 1930s. Life expectancy was still less than sixty years old and the figures for Hull were some of the lowest in the country.

We tend to think of the 1930s as a era of cinema classics which is far removed from the puerile dross of the modern screen. But we are, of course, cherry picking and a quick look at the cinema programme in September 1931 in Hull shows us that titillation was even then a prime ingredient of popular entertainment. There seems to be a concentration on marital relationships - "kept husbands", "Bachelor Fathers" and "What a Widow". My favourite title is perhaps "Sin Takes A Holiday" which was a convoluted romantic comedy about a rich divorce lawyer and his "dowdy" secretary. Some movie executive forgot to renew the copyright on the film when it ran out in 1958 and consequently it is now in the public domain and available in full on YouTube.I'd like to say it is worth a viewing - but it's not!


I have not been able to find any evidence that Fred Laverton managed to break the World Roller Skating Record at the Hull White City Skating Rink in September 1931. Such record-breaking attempts were commonplace in the early 1930s - an era of marathon dances and endless skating performances. People would pay a few pence to watch others suffer in an attempt to achieve a meaningless feat. Which, it must be said, sounds like a lot of modern reality TV. 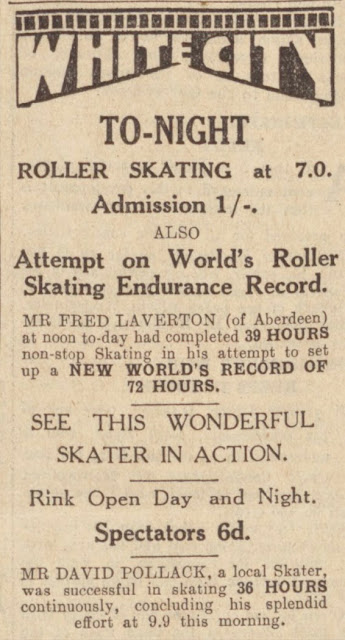