Winking At A Carpenter 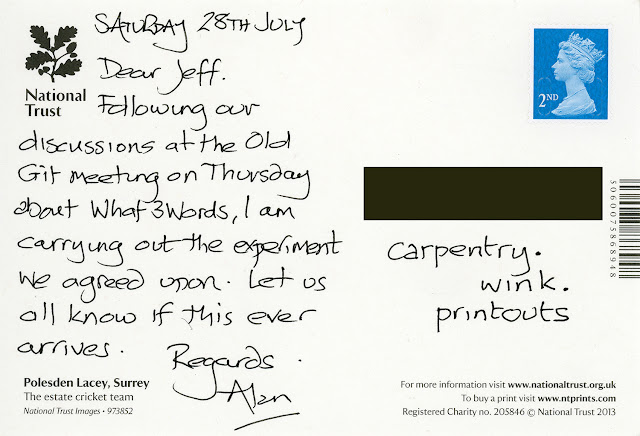 At a meeting of the Old Gits Luncheon Club the other day we got to talking - as one does when you've had a pint or two - about the latest developments in geo-positioning technology. There is now a system available, it appears, which has assigned a three word code to every three metre square on planet earth; and the good news is that the three words are in English! Some suggests that these three word addresses will soon replace old fashioned approaches such as postcodes and grid references. In particular, the precision and simplicity of the three word system - it is suggested - makes it ideal for use in drones and other robotic delivery systems. 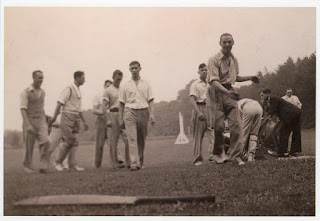 We were anxious to discover how old fashioned technologies such as picture postcards would be able to cope, so, as an experiment, it was agreed that I would attempt to send a postcard to another Git member using only the What3Word code for his front door. Would the Royal Mail be able to work out what was happening and interpret the address?
One of the great advantages of the system is that the three word code is, theoretically, much easier to remember that a complex and lengthy numerical grid reference. Equally it is far more precise than a post code that can cover half a street. One problem, however is that the three words are random and therefore not sequential. The front door of my fellow Git is at carpentry.wink.printouts, but the code for his front room will be something entirely different. Therefore, if you make the slightest error in transposing the code you can send your drone/card/nuclear warhead to entirely the wrong place. In my first attempt to write is address I mistakenly put carpentry.winks.printouts which turns out to be in the middle of the jungle just north of Ouagadougou in Burkino Faso!

I will let you know if the card ever arrives at its intended destination. In the meantime, if you would like to find out more about the system and discover your unique three word location code, you can do so by going to the What3Words website. 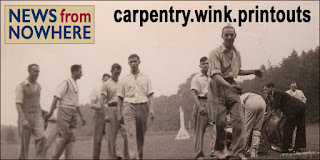