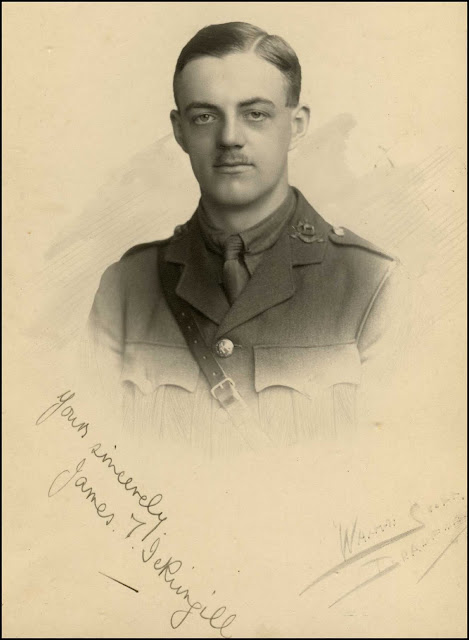 My picture this week is a portrait if James T Ickringill which appears to have been taken during the First World War. The picture came to me from my fathers' sister, Annie Elizabeth Burnett 1903-1978, and I can remember her talking about "Mr James" towards the end of her life. She was born in Bradford in 1903 and she would have left school and started work in about 1917. Her first job - indeed I have a feeling that it might have been her only job until she got married - was at Ickringill's Mill in Legrams Lane, Bradford. Just how come she had a signed photograph of "Mr James", I do not know, but I can half imagine. By the early twenties she would have been 18 year old beauty. Maybe "Mr James" had left his youth on the battlefields of Flanders, but still he had pasteboard portraits he would hand out to the young mill-girls with a world-weary twinkle in his eyes. I can still remember the enigmatic smile on Auntie Annie's face as she spoke of "Mr James".  Who knows? Sometimes it is better not to know - just imagine.
Smile at the other posts that are taking part in Sepia Saturday 70 by following the links on the Sepia Saturday Blog.