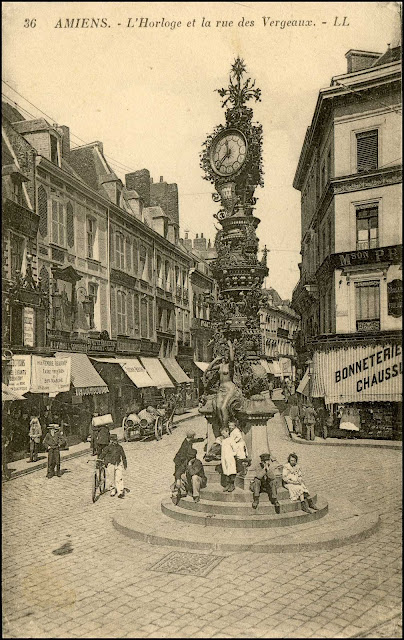 A clock with connections to the First World War was the Archive Image introducing this weeks' Sepia Saturday and I have decided to follow the theme by posting another clock with wartime connections. The image is from a postcard that is part of my collection, a postcard which was never posted, but does have a name penciled upon it, that of a certain Miss W Willby. I suspect that the card was bought during the First War - Amiens featured prominently in the campaigns and hosted hundreds of thousands of Allied troops - but why it was not sent we will never know.
The magnificent clock was constructed in the 1880s, the gift of the Mayor of Amiens, Louis Dewally. It was erected close to the railway station so that the citizens would never again be late for their trains. At the base of the iron column, the sculptor Albert Roze fashioned a magnificent reclining nude in bronze. It is said that the statue shocked some local citizens - I can hardly believe this as it is France not West Yorkshire - but it soon became a famous feature of the city and was christened "Marie Sans Chemise". 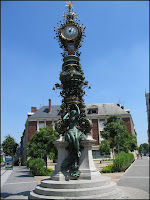 During the Second World War the statue and clock were taken down in order to protect them from damage, but in the chaos that followed the end of the war, they mysteriously vanished and were never seen again. To mark the Millennium, the City Council commissioned a copy of both the clock and statue and they now can be found in area of the Cathedral. So, in Amiens, time was lost but later found again.
This is a SEPIA SATURDAY post. You can enjoy all the other contributions to Sepia Saturday 72 by following the links on the Sepia Saturday Blog.
at April 30, 2011