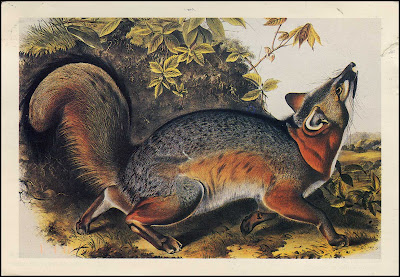 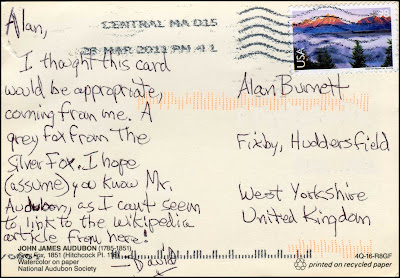 For a long time I didn't think that David Lynch (a.k.a. The Silver Fox) existed, I thought that he might be a product of his own extremely active imagination. And then I realised that there might be a degree of contradiction in that thought, in that if he didn't exist he could not have an imagination. But I digress. And that is what David does so magnificently. Digress. Starts saying one thing and end up saying something else and then coming back and saying what he first was going to say. And always with a style and a humour that is compulsive. In short, he's my kind of blogger. And he must exist, because he has sent me a card which is the latest entry into my weekly Twitter For Gentlefolk feature. And just in case you want Audubon, here's the link the postcard couldn't quite manage.