Man In Space And A Woolly Mammoth Outside the Odeon Cinema 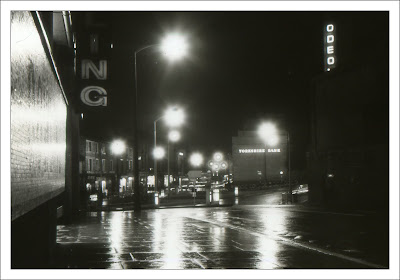 For us all, there are those dates. Those dates that get frozen in historical time. Those times when the actions of the individual become connected with great events in world history simply because they share the same date. Where were you when Kennedy was assassinated or when the Twin Towers fell? Where were you when it was announced that the first man had gone into space? 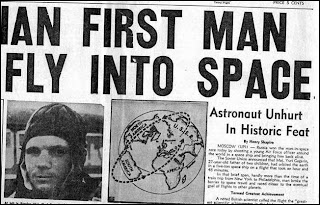 Like most people who are old enough to remember that day - fifty years ago yesterday - when it was announced that Yuri Gagarin had gone into space, orbited the earth, and returned safely, I can remember exactly where I was when I heard the news. I was outside the Odeon Cinema in Halifax, just across the road from the new Halifax Bowling Alley. I was on my way home from school, heading for the bus station, when I saw a newspaper billboard. "Man in Space" it declared in suitably large black letters. What may have happened in the lead up to the flight I cannot remember, whatever happened after the flight I can only remember vaguely. But that moment I read the newspaper headline remains frozen in time, perfectly preserved like one of those woolly mammoths they occasionally pull out of the Russian tundra.
By chance, I have a photograph of the spot where I read the news which I took a couple of years later. It was taken at night and after a heavy shower of rain. But in my mind, there is a young lad in his school uniform meeting up with the woolly mammoth of history outside the Odeon Cinema.
at April 13, 2011