History In A Pint Glass 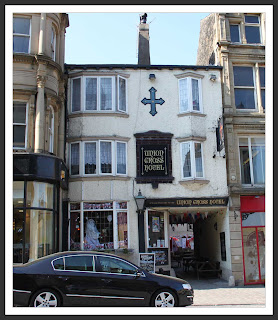 So here I sit, in the Union Cross Hotel, Halifax. On one wall, an over-intrusive television pipes silent images of extreme wresting to a deserted tap-room. Flashes of film, as long as an adolescent's attention span, show flesh bruising flesh in over-full colour. The window is dressed for the Royal Wedding : two dummies sit in mock supplication before the passing Saturday shoppers. He wears a black coat and charity store top hat, she wears a white wedding dress, the enterprising offspring of a table cloth and a bed sheet. They meet hesitatingly, coming together over a bouquet of plastic flowers.
On another wall hangs a Union Flag and I try to decide whether it is right way up or not. In some ways it is a fitting wall hanging for the Union Cross Hotel, but then I recall that such a name is a recent innovation, dating back no further than 1745. The pub was originally known as the Crosse Inn and dates back to the early sixteenth century making it the oldest inn in Halifax. In 1745, in the midst of the Jacobite Rebellion, some Georgian spin-doctor decided that the Inn should be renamed in support of the Union between England and Scotland which, at the time, was coming under some pressure from a certain Bonnie Prince Charlie. I drink up and nod in greeting to the wedding couple in the window. History in a pint glass. 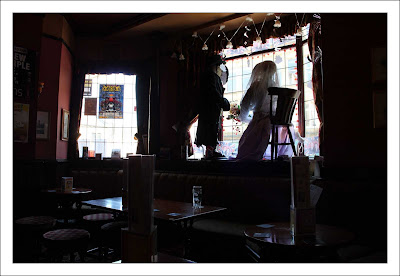