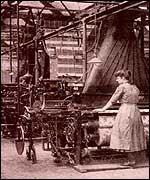 By the eighteen fifties and sixties, a new generation of mill owner was beginning to dominate the textile industry in Bradford. Samuel Lister, Titus Salt, John Foster and others were building mills on a massive scale. They were also beginning to provide improved housing for their workers, churches, chapels and elementary schools. Self-improvement was in the air and it is likely that John Burnett wanted to take advantage of the opportunities that were available.

The self-improvement obviously paid off and by the time of the 1891 census we find John Burnett listed as a Weaving Overlooker. Whilst the standard dictionary definition of an “overlooker” is “an overseer or foreman”, a word of caution is necessary, especially in relation to the use of the term in the nineteenth century in the West Riding of Yorkshire. The census records include a large number of “weaving overlookers”: in some cases almost every other house has a weaving overlooker as an occupant. Equally, some of these are comparatively young – in their early twenties – and in some cases they are female. These facts do not easily fit in with the modern concept of a “foreman” as a junior management position. A more likely explanation is that at the end of the nineteenth century in the West Yorkshire woollen and worsted industry, the term was used for the activity of “overlooking a loom” – a position somewhat similar to that which in the Lancashire cotton trades was known as a “tackler”. Each individual loom or group of looms would have been serviced by a small group of workers, the role of the overlooker would be to set-up the looms and supervise this small group.

St Oswald’s Buildings, Southfield Lane, Bradford. The site of the house of John Burnett in 1891.In 1891, John Burnett and his family were living at 3, Southfield Lane, Little Horton, Bradford. The house no longer exists: on the site there is a group of shops known as St. Oswald’s Buildings which were erected in 1900. It would appear that the previous dwellings were demolished in order to facilitate the widening of Little Horton Lane. We tend to think of road widening as a recent curse on the urban landscape. One possible explanation is that it was the extension of the Bradford tram system which was the cause of the loss of the property. A contemporary picture of Little Horton Lane just before the road widening is available and this gives us an idea of the area John Burnett was living in. 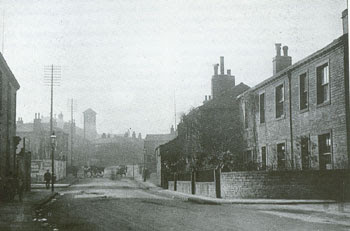