There's An Awful Lot Of Pixels In Milan

I am never sure about billions : never sure if it is a thousand million or a million million. I think it depends where you are. Not that it has ever been a practical problem because I don't think I have ever had a billion of anything (other than boring things like cells or hair follicles and the like). I am driven to ponder such things by an announcement by the authorities in Milan that a new digital image of Leonardo Da Vinci's masterpiece "The Last Supper" with an astonishing resolution of 16 billion pixels is now available online. The new on-line image is 1,600 times stronger than the images taken with the typical 10 million pixel digital camera. That's some detail. To illustrate my last remark - as the song says - here is a typical digital image of the painting. 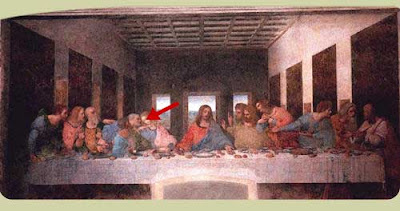 And here is an extract from the new image of the left eyebrow taken from the spot marked on the first image. 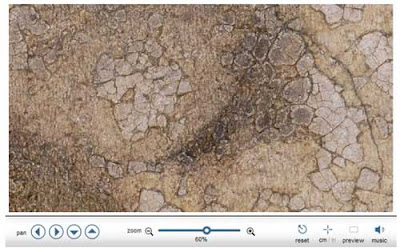 And as you can see this is just at 60% of the magnification available. Wow indeed.
It could be argued that this new offering neatly illustrates not only the potential power of the internet but also its futile pointlessness. Until now I have lived my life quite happily without being able to inspect in microscopic detail the cracks in the paintwork. Images made up of 16 billion pixels are, perhaps, an information stream too far. My own view is that there is no such thing as information overload : only inadequate storage and retrieval systems.

I discovered the story about the Last Supper whilst playing around with del.icio.us. del.icio.us is a social bookmarking website, which means it is designed to allow you to store and share bookmarks on the web, instead of inside your browser. Such lists can be made available to others and shared with friends and colleagues. Like many others, I spend many happy hours trawling through the web. Sometimes I pick up interesting things sometimes its just the internet equivalent of garbage fish which are thrown back overboard. My del.icio.us account allows me to share the more interesting stuff from the bottom of my net with others. If you want to check it out, there is now a link to my del.icio.us homepage in the sidebar of this blog. If you would rather look at the cracks on the surface of the Last Supper it can be found in all its glory on the haltadefinizione website.