When I had my "funny turn" a couple of weeks ago they did a whole load of tests but the only ones which came up "abnormal" were my blood pressure readings. I had always prided myself on having beautifully normal blood pressure and therefore it came as something of a shock to discover they were above the "normal range". They took my blood pressure at both the GPs and the Hospital and told me to go back to the GPs to have it checked again. I was convinced that it was high simply because I was sitting in a GPs Surgery (Hospital Ward) having been told the chances were I had suffered a mini-stroke (the more I repeat that phrase the more it sounds like an out-of-season weekend break for swimmers).
After all the fuss and bother was over, I invested in a Blood Pressure monitor (£12.50 from Asda!) and monitored my pressure with the manic obsessiveness of a card-carrying hypochondriac. Panic over : it was floating along at about 135/85 which, according to that fount of all medical knowledge - the Internet, is nice and normal. 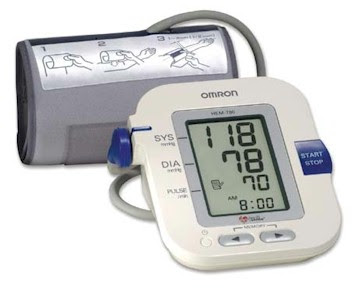 So I set off for my appointment with the Practice Nurse this morning with a light heart and blood rippling through my veins like a gentle moorland stream in August. As I drove out of our drive the car seemed to shake and a strange noise came from somewhere. I stopped the car and looked underneath to discover Alexanders' basketball jammed under the exhaust pipe. After a good few minutes prodding and poking I managed to get it out and kicked it as far as I could into the garden bushes.
This was perhaps my first serious mistake. If you've ever tried to kick a basketball (wearing a pair of light summer shoes) you will know that it can give rise to some discomfort around the region of the big toe. It did. Limping and in considerable pain I eventually managed to get the car started again and drive down to Brighouse where the Health Centre is. By now I was in danger of being late and needed to park in the Municipal Car Park and get up to the doctors in double-quick time. I found a parking spot fairly easily but couldn't get a ticket because the machine was being serviced. The man kept saying useful things like "Won't be a minute, mate" and he was quite correct : he wasn't anything like a minute - more like five.
By then, of course, I was hopping mad (this is a wonderfully descriptive term as I was jumping up and down with one leg making fists with my hands). Eventually I got my ticket and run up the hill to the surgery.
So it will come as no surprise to learn that, on testing, my blood pressure was once again high. I have to go back in a couple of weeks. If it is still high I might have to be fitted with some kind of 24 hours monitoring system. I am in danger of starting along some "hypertension pathway". Like all such pathways, it leads straight to the Crematorium gates.
Over the next two weeks I need to calm down. Think restful thoughts. Avoid stress. Relax.
at October 15, 2007