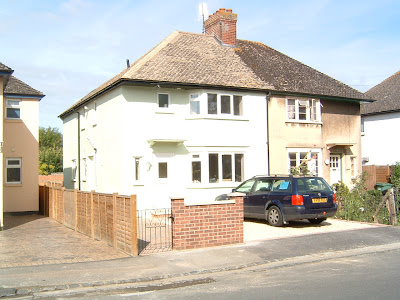 Ah the bliss of being woken by a dog-kiss! Even if horribly early. My mother had many "rules", one was no dogs upstairs. But then there came a time I was home alone with the dog of the time - yes, a labrador. Instead of a quiet howl/whine from downstairs (I always seemed to end up sleeping over the kitchen where the dog slept) at sunrise to be reminded he was there and it was morning now, a patter, patter, patter and gentle lick to be told the sun was up... and if I must sleep longer, move over, he was going to lie beside me.

Many years later, now married to Jane, I accidentally got my own back (as regards animal early awakenings) on one of the cats draped around the bed.. one (I hadn't realised) was on the side by me when I suddenly felt like curling up, half asleep, and too late I realised it had been there but I'd hurled it onto the floor. It looked most surprised, I was normally so gentle!

Ah well! Animal memories apart, thought I should show the recently-completed neat front of our development house, gate and wall and gravel "driveway" in place... with, yes, our car parked on it, poster for Jane's book A Proper Family Christmas showing in the back window. (She spent this afternoon reading some of her canal ghost short-stories, soon to be published by Oxpens, to author Colin Dexter, who loved them.)

So, the front looks good, nothing else to do on my lists... 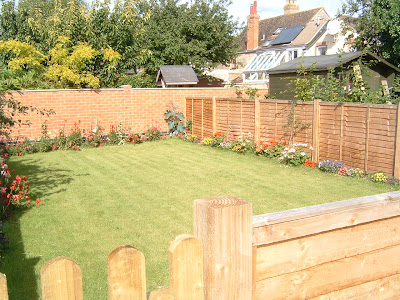 And this shows one of the gardens at the back - there's one per flat. Nothing to do there, either, except move a large bag with a bit of topsoil in it that looks ugly and except that the grass grows all too quickly and Jane worries that the flowers may start dying away before the insides of the flats are ready for a public eye. Well, valuer and prospective purchasers.

But inside is coming along like a ... I was going to say "house on fire", but that might be tempting the fates, even if it is insured. (Come to think, I must tell the insurers it IS now two flats...)...

This morning the downstairs lights went on (the mains sockets already "on")... even if I did suddenly realise too late (for today) I hadn't done the shaving light over the basin in the bathroom thereby leaving a floating now-live cable in mid air... and a lot of the final painting started. We have still got to build the kitchen and lay floor finishes and arrange some carpets and I've only done half the tiling in that bathroom... upstairs needs a bit more but nothing drastic... can't see it should take more than 2 - 3 weeks.

Oh, and when I turned on the lights (downstairs) the outside lantern didn't go on but the hall light did for the wrong switch... and I could have sworn I'd labelled the wires so carefully... shucks. All corrected, didn't take long. Mind you, I always find that if there's only a choice of two it is incredibly easy to reverse them - it's exactly like the intensely embarassing moments one has said "yes" when you meant "no" or vice-versa. Can't believe the number of people I've met say they've had the same effect - I mean, about saying "yes" instead of "no" ... where the annoying thing is that in conversation you can get totally trapped with no opportunity to say "I said the wrong one!"... that sounds too crazy... and it can take such ages to explain you'd actually meant "no" (or "yes") but accidentally said the wrong one.

I know I'm not alone in this. Apart from embarassing memories, just the other day when we took friend and neighbour Caroline to the hospital for a medical test (results A1 OK, thank goodness) she raised the theme herself. It seems to be a common failing and, in fact, why, for example, people let salespeople talk them into signing on for things they didn't possibly want.

But lets not get into that. I've still not checked where my huge Don Quixote book is - it might even be valuable for all I know - that sort-of-related second-husband of that great aunt made a lot of money from the manufacture of enamelling of baths and kitchen cupboard tops and collected expensive things, I was told. Must admit I loved the collection of clocks - and uncle Harold (step uncle Harold) had to adjust most of them to chime the last half hour on the pull of a string for another relative who had gone blind.. well, almost. I only met her very young and I remember I was rather shocked to discover she wasn't totally blind so I'd been mislead by all-knowing adults yet again...

Alan says he gets angry for being older. I find I get invaded by reminiscences I know nobody really wants to hear about, but they so spin around in my head it's therapy for me to simply concentrate (when I can) on specific good events. Like getting my wiring right.