Sepia Saturday 302 : A Unique Moment In The History Of Mankind 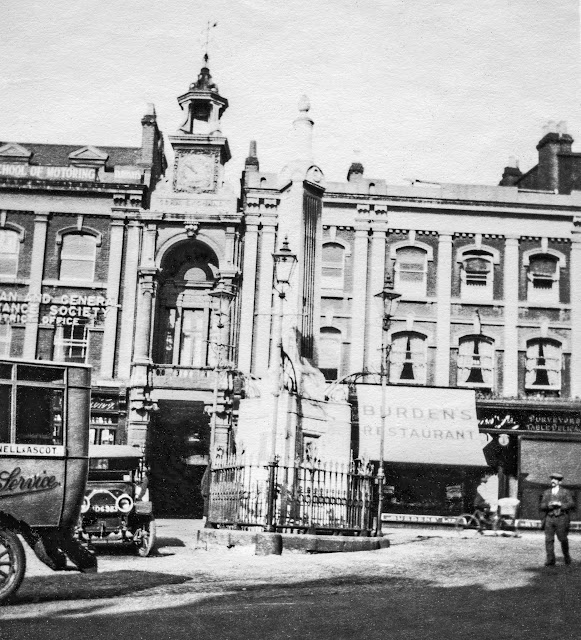 Our Sepia Saturday theme image this week shows a young lady playing a harp and gazing into the near distance, caught in some kind of reverie, and dressed as if to suggest Britannia winding down on a Sunday evening after a heavy day spent knocking ten bells out of the Roman invaders. No doubt you are wondering what on earth that has to do with my featured image which shows an early twentieth century high street of little import and less consequence. The answer is, absolutely nothing at all. The important thing about Sepia Saturday is that there is no requirement to try and follow a suggested theme, merely a requirement to give some seemingly insignificant old photographs it's fifteen minutes of worldwide fame, it's moment in the sun. So this weekend, whilst the lady harmlessly strums her harp strings, the sun shines on the Corn Exchange in ...... somewhere or other.

I have dedicated a good few minutes to trying to identify the location of this particular photograph which somehow attached itself to me (old photographs have a habit of getting into the house through half open windows like flies in the summer), but with no success. The bus legend would suggest perhaps "Ewell and Ascot" and therefore - unless it had strayed too far away from home - we are probably dealing with Surrey. Neither Burden's Restaurant nor Tarrant's School Of Motoring seem to be in business any more, but I would guess that the Corn Exchange building and the monument or market cross still grace some southern high street or other. And I would be prepared to bet a pint of Harp Lager than before the weekend is out someone has written in to tell me where they are.

But the sun is probably no longer shining on the little man on the right of the picture: caught forever in mid-movement in this old, not particularly good, slightly out-of-focus, long-forgotten photograph. But think of all the variables that had to come together to create this image: the man standing, the car coming, the bus going. So many variables that it is unique. The scene was never repeated. Let us be grateful that the photographer was passing by in order to record for posterity this unique moment in the history of mankind.