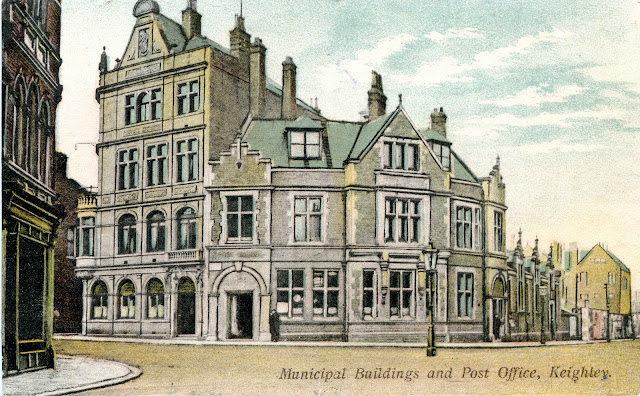 Towards the end of the nineteenth century municipal competitiveness was all the rage in the north of England. The rivalries between neighbouring mill towns in Yorkshire and Lancashire was fought out on the football field, the cricket field, and the rugby ground: but as town treasury coffers grew in size, that competitiveness began to extend to the scale, design and elegance of the municipal buildings themselves. A Great British Town Hall Race was instigated to achieve the most striking edifice that would reflect the grandeur of the local community.

For some reason, the town of Keighley never seemed to have entered the race. Perhaps the civic leaders were too canny: they spent their money constructing a technical college worthy of a Venetian Prince, and two or three grand looking pubs as well. The Municipal Buildings - which are shown on this early twentieth century postcard from Fowler Beanland's collection - were generously muted and even then they were shared with the town's post office. The post office has now moved across the road to a modern shopping centre: but the municipal buildings are still there and still generously muted.
at September 05, 2016

Email ThisBlogThis!Share to TwitterShare to FacebookShare to Pinterest
Labels: Postcards From Home