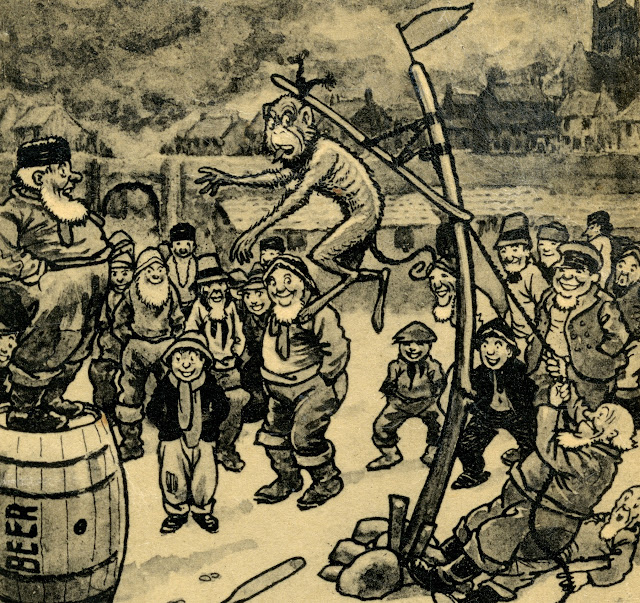 "Do you know about the Hartlepool Monkey?",  Jack asked me in the pub the other evening. Somewhere in the recesses of my mind, there was some kind of memory - didn't the people of Hartlepool elect a monkey as mayor several years ago? - so I said yes and was handed an old postcard which set out the ancient, and rather brutal, legend of the monkey that was hung by the fishermen of Hartlepool because they thought it might be a French spy during the Napoleonic Wars. At the height of the wars, when there was a great fear of a French invasion, it appears that a French ship was wrecked in a storm off the Hartlepool coast. The only survivor of the wreck was the ship's pet monkey which had been dressed in a military style uniform. The fishermen became convinced that the monkey was a spy and held a trial on the beach and the poor creature was sentenced to be hung. 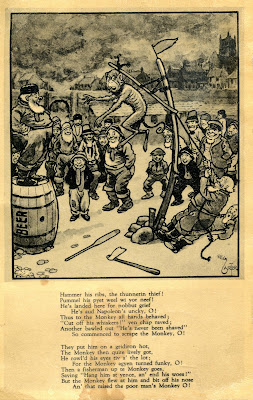 Two verses of the longer ballad about the affair of the Hartlepool monkey are printed on the card. Here is the first verse - which isn't on the card - and which provides some context for this infamous miscarriage of justice. I should point out - in the manner of a TV announcer - that readers may find some of this material distressing.

"In former times, when war and strife ,
The French invasion threaten’d life
An’ all was armed to the knife
The Fisherman hung the monkey O !

The Fishermen with courage high,
Siezed on the monkey for a French spy;
“Hang him !” says one; “he’s to die”
They did and they hung the monkey Oh!
They tried every means to make him speak
And tortured the monkey till loud he did speak;
Says yen “thats french” says another “its Greek”
For the fishermen had got druncky oh!

The story is, of course, nothing but a myth (albeit a powerful myth; the good folk of Hartlepool did indeed elect a man dressed as a monkey their Mayor some years ago) and I am glad to say that no monkeys were hurt in the production of the original card nor in my retelling of the story here.
at March 28, 2017