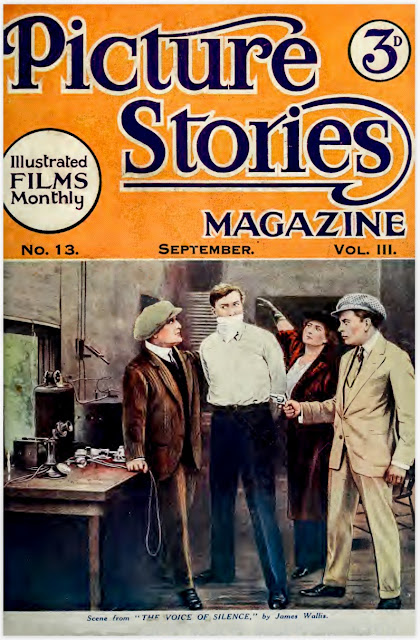 The advert for the Midland Hair Manufacturing Company appeared in the September 1914 edition of the British periodical, Picture Stories Magazine. Picture Stories was one of a new generation of magazines aimed at the growing cinema audience - magazines that tried to make up for the fact that films were still silent and plots could only be indicated by dramatic movements and the occasional truncated subtitle. Picture Stories would provide the back-story so the watching audience could get the full benefits of the on-screen action. The film featured on the front cover is "The Voice Of Silence", a dramatic crime caper from the Edison Company. A summary of the plot of the film goes as follows: "Sue, a deaf mute, becomes acquainted with a wireless operator at Cliff Island and learns to use the apparatus. Three "crooks" of international notoriety overpower the operator when trying to communicate with the yacht on which they plan to escape, but Sue warns passing ships. They are captured and Sue gets a reward."
at April 25, 2017