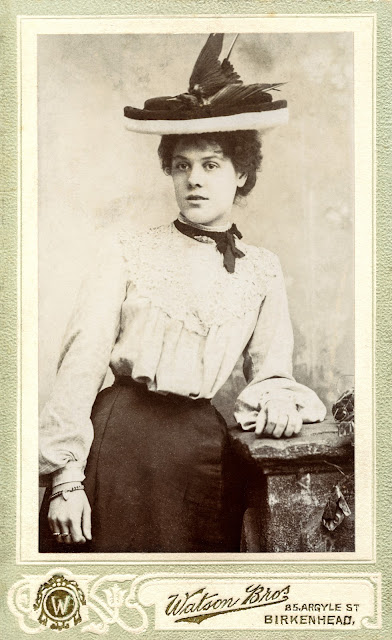 In my mind I still have the image of poor deaf Sue communicating with passing ships in order to warn them about the crooks of international notoriety. And the thought of passing ships somehow takes me to Liverpool and the River Mersey and holidays we would take when I was a child at New Brighton where I would watch the ships from Liverpool and Birkenhead pass by. Perhaps this bonnie lass used to watch the ships pass by from her home in Birkenhead - she appeared in a small collection of Victorian and Edwardian Carte de Visites I bought the other day. Whenever I acquire such a photograph which has the photographer's name on it, I immediately go in search of further information about the firm. There is, however, precious little to discover about the Watson Brothers who had a studio at 85, Argyle Street - they are difficult to track down via the usual sources such as census records and trade directories.

There is, however, one intriguing possibility - there was an artist called Watson living in Birkenhead at the time along with two of his children - Walter and Sydney Watson - who were also listed in the 1901 census as artists. Most studio photographers of the era would credit themselves as being "artists and photographers", so it may be that they two Watson boys set themselves up, for a short time at least, as studio photographers. Their father, William Watson Jnr (1847-1921) was a moderately famous artist whose work still manages to fetch a tidy sum in auction houses. Like his father before him, and like at least three of his children after him (Sydney being one of them), he specialised in pictures of highland cattle and sheep in cloud-shrouded Scottish Glens - the kind of scene that appealed enormously to the Victorian upper middle classes. Could it be that the gaze of the young lady in the portrait had been caught by a herd of passing highland cattle?
at April 26, 2017