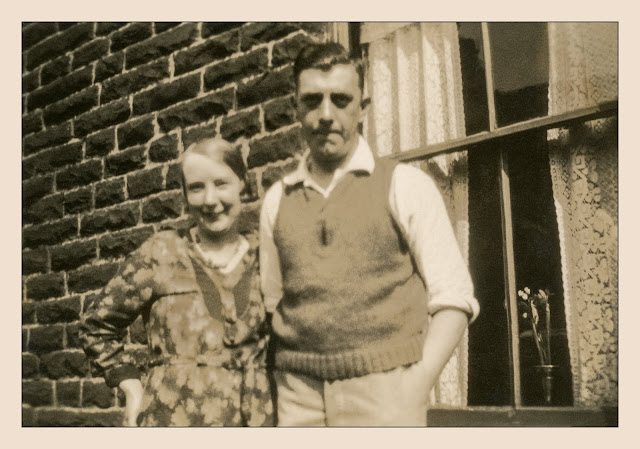 This photograph of Amy and Wilf Sykes must have been taken in the mid 1930s. Amy Beanland was born in August 1904 in Keighley, Yorkshire, the eldest daughter of Albert and Kate Beanland (my mother Gladys was Amy's younger sister). Wilf was born in the Yorkshire town of Pontefract, the son of a local policeman. His family later moved to Bradford and Wilf trained to become a wool-sorter and easily found work in what was then the wool capital of the world. Amy, the daughter of a mill mechanic, also worked in the mill and met and - in 1929 - married Wilf and settled down to a settled life in a Bradford suburb.

​In 1939 (according to the 1939 Register) they were living at 1, Yarwood Grove in Great Horton, Bradford in a smart new semi. It was a house I was familiar with as we would often visit it for family parties when I was a young boy. The settled nature of their future came apart in 1963 when Wilf - still in his 50s - died. It would be easy to imagine that Amy would settle into the life of a lonely widow, but she would have none of it - she was to marry twice more before eventually passing away aged 98 in 2001.

In tracing the long and romantically active life of Amy through the various public records, what I was really surprised to discover was how that 1939 Register was continuously updated, decades after it had been first introduced to organise wartime ration-books and conscription. Careful handwritten amendments have been added to the original records to update her details following her marriage to Leslie Hanby in 1969 and Joseph Barker in 1974.