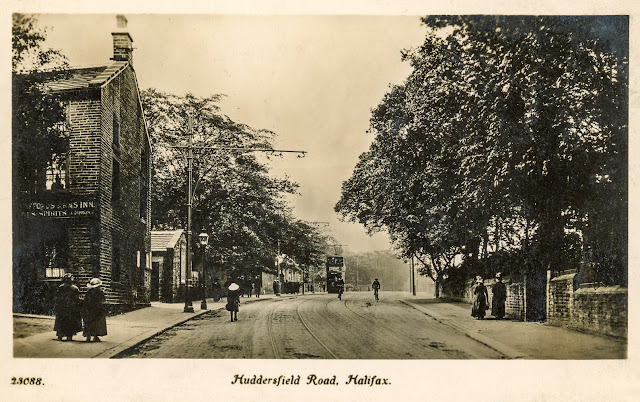 This is a scene which will be all too familiar for Halifax residents of this present age. After the long slog up Salterhebble Hill, and the inevitable wait at the hospital traffic lights, drivers heading for Halifax can now speed past the restaurant that used to be the Stafford Arms Inn, with no tram lines or pedestrians walking in the middle of the road to avoid. The Stafford Arms had been around for more than 160 years when it was eventually closed and converted into a restaurant in 2010. I remember it back in the 1960s, when it had the reputation of being a rather superior public house, (needless to say, I wasn't a regular). Alas, it has now gone the way of so many pubs in West Yorkshire, and exists merely as a picture postcard memory. 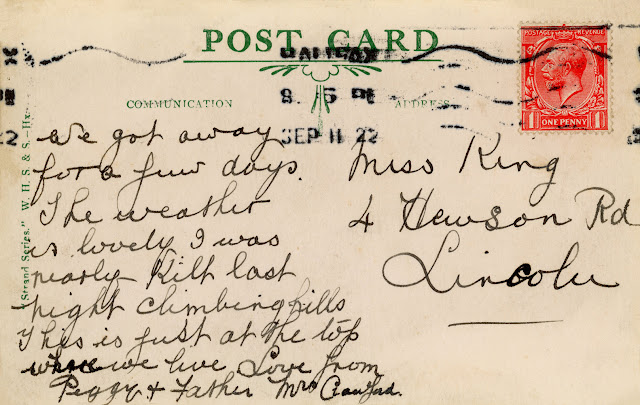 The card was posted in September 1922 - although I strongly suspect that the photograph dates from at least ten years before that. It appears to have been sent by Mrs Cranford to a Miss King in Lincoln. The message is as follows:-

We got away for a few days. The weather is lovely. I was nearly killed last night climbing hills. This is just at the top where we live.

The hill in question is no doubt Salterhebble Hill, and I can well imagine that poor Mrs Cranford was nearly killed climbing it. When they first built the tramway system in Halifax, they feared that no conventional tramcar could cope with Salterhebble Hill, and for a time considered either a tramcar lift or an inclined plane. Both suggestions were eventually dismissed, and those feisty Edwardian engineers eventually managed to get a conventional tram to climb the hill. If, in this modern day and age, you leave the car behind and choose to walk up the hill, there will be no refreshing pint waiting to reward you at the Stafford Arms.
at October 28, 2019