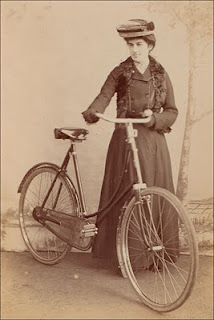 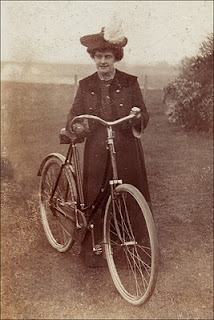 Two Sepia Saturday pictures for the price of one today. Both come from the collection of my very late Uncle Fowler (he died over fifty years ago) and date back to the time he spent in Longtown, Cumbria in the early years of the twentieth century. Uncle F (actually he was my mothers' Uncle, but he was always known as Uncle Fowler by everyone in the family) was a textile mechanic by trade and for a time he moved away from his native West Yorkshire to live and work near the Scottish borders. He was the person responsible for the bulk of my vintage postcard collection - although I have added to it - but he also passed on a number of photographs which were printed - as was the fashion at the time - with "postcard" backs. The two photographs show girls posing with bicycles, indeed, the two poses are so similar for a time I thought they might be the same girl.

There are scribbled notes on the back of both photos. On the first (the studio shot) is written "Miss M Spiers, Chamber Maid, (see the other)". On the second (the outdoor shot) is written "Miss E Pearson, Cook at Mr James Grangham, Longtown". So here we have it : Fowler, at the time just over 30 years old, single and living away from home, with pictures of two charming young ladies. He never married, so his Longtown love - whether Miss E or Miss M - must have been left behind in Cumbria when he returned to West Yorkshire, But which one was it? There is normally an unsolved mystery in these Sepia Saturday posts of mine : but not in this case. On the reverse of the photograph of the outdoor Miss E, in the spidery hand of an old man, is written "She was my Longtown Sweetheart". I like to think of Uncle Fowler, as an old man living in Keighley, thumbing through his photograph collection and finally making his decision.

Let me know if you have a Sepia Saturday post and I will add you to the following list.