I must confess that I was rather pleased when I saw that the subject for Theme Thursday this week was "Surface", for I have long been of the opinion that surfaces suffer from a bad press. To discover the real essence of something we often say that we need to "scratch away the surface", implying that the surface is somehow vainglorious, ephemeral and false. Serious scholars try to "get beneath the surface" of an issue to discover the true questions and the real controversies. For some reason "surface" has almost a "celebrity" connotation : a bit false, a bit lacking in substance, a bit short on gravitas. Personally, I am a great lover of surfaces and the last thing I want to do with them is scratch them away.

Take, for example, a rice pudding. Has anything finer ever been invented than a rice pudding? Of course not. And what is the very finest part of a good, home made rice pudding? It is the skin, the surface, the bit which has been turned golden-brown by the amorous licking of the oven-flame. Scratch away that surface and what are you left with - nothing more than a milky-rice concoction which is all very nice but nothing much more than that : "nice". Take a slice of toast, what do you find when you dig beneath the surface other than bread : and more often than not, bread which has passed the first bloom of youth. What makes it palatable, what accelerates it out of the realm of the ordinary into the domain of cordon bleu sanctity is the surface - the sun-burnt crispness that results from its almost erotic intimacy with fire embers or electric elements. 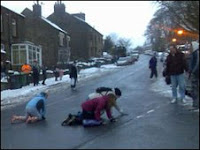 I am not suggesting that surfaces are universally marvelous, sometimes surfaces can be challenging and even dangerous. I write this at the end of a day when here in Yorkshire we have witnessed some of the worst black ice in living memory. The untreated surfaces of many side roads became little more than ice rinks during the morning, to such an extent that the good citizens of Huddersfield were reduced to crawling accross roads on their hands and knees. Accident and Emergency Departments have seen a fourfold increase in admissions of people with broken and bruised limbs. People, I have to say, who believed the accepted wisdom that surfaces are not important, it is what lies beneath them that matters. Beneath the surface of the ice this morning was good old familiar road tar, but what caught them out was the surface ice.

Don't be tempted to dig under the surface : take a look at what others have had to say about Theme Thursday this week.