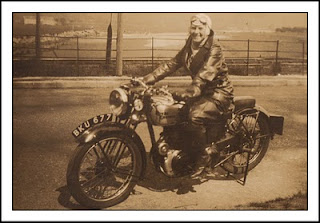 My first sepia offering of 2010 is another photograph of my mother, Gladys. This picture must have been taken in the 1930s when my mother and father would regularly tour England on their motorcycle. Although the photograph shows my mother at the controls of the bike, she was exclusively a pillion rider : my father - who I assume took the photograph - was the one in charge of the controls. I have a feeling that the photograph was taken in the West Country - in Devon or Cornwall - and the scene in the background would seem to fit in with this. It is a happy picture, a picture infused with adventure and excitement. It is a nice picture to start 2010 with.

Here is a list of those people participating in Sepia Saturday this week. If you would like to be added to the list, just let me know and I will add a link to your blog.

AT HOME WITH KEITH