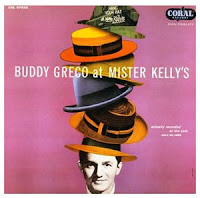 Do you remember the first record you really knew. Not necessarily the first record you remembered (I half remember a pile of dusty 78s my parents owned) nor the first record you bought (that had to wait until I had money). But the first record I really knew - knew so well that all the tracks were engraved into my subconscious like grooves in polymer - was one of my brothers' LPs. It was called Buddy Greco at Mr Kelly's and it was a recording of a live performance by the great lounge and jazz singer at Mr Kelly's Club in Chicago. After all these years I could still probably sing all the words of all the songs from the moment when Greco says "Welcome To Mr Kelly's" right through to the last verse of the last song ("Give Me The Simple Life", I seem to recall). It is part of my musical heritage and that means track four of side one (younger readers please note, records used to have sides) is part of my lyrical bedrock. Track 4 on side 1 was Jimmy Van Heusen's song, "Polka Dots And Moonbeams".

It's an odd little song, not your usual love, dove, moon, June affair. It conjures up all sorts of odd images. A country dance for some strange reason is being held in a garden! The singers' beloved is described as "a pug-nosed dream" (the song was written in 1940 in the days before nose-jobs existed). But it is a charming simple song which has the power to transport me back 50 years. As soon as I saw the theme for this Thursday I was mentally playing the song in my mind, listening to Buddy Greco's smooth tones. The lyrics are as follows - if you know the tune you can sing along.

A country dance was being held in a garden
I felt a bump and heard an "Oh, beg your pardon"
Suddenly I saw polka dots and moonbeams
All around a pug-nosed dream


The music started and was I the perplexed one
I held my breath and said "May I have the next one?"
In my frightened arms, polka dots and moonbeams
Sparkled on a pug-nosed dream


Now in a cottage built of lilacs and laughter
I know the meaning of the words "Ever after"
And I'll always see polka dots and moonbeams
When I kiss the pug-nosed dream.

I tried to find a YouTube video of Greco singing the song but I couldn't. There were several YouTube recordings of the song but none of them came within a mile of Greco's way with the words. So instead, I will leave you with a video of another Greco song, one which featured on that same Mr Kelly's LP. It is perhaps his most famous recording and it is "The Lady Is A Tramp". The video is of historical importance as it is a Scopitone movie (Scopitone was a very early form of video juke box which made use of 16mm film) and therefore represents an early antecedent of modern day music videos.