In Praise Of Bits And Pieces

I have always been a great fan of bits. Break something up into a couple of dozen pieces and it always seems much more palatable to me. When Tolstoy started writing War and Peace, he published weekly chunks in a popular magazine (Dickens used the same approach with most of his novels), and this has always seemed to be a useful approach to literature. Many of my blogging friends use the same approach with their stories, and blogging itself appeals to me because of its' bitty nature. And one area where I find a bitty approach to be a particularly valuable one is with history.
Recently the BBC started a major collaborative project with the British Museum called "A History Of The World In 100 Objects". The series is nothing short of superb, but - confined to the unfashionable radio as it is - it has not received either the publicity or the acclaim it deserves. The idea is quite simple : get someone to select 100 objects from the collection of the British Museum that, in one way or another, reflect the history of the world and then spend 15 minutes each day talking about them. With such a brief, and with episodes with titles like "Jade Axe" and "King Den's Sandal Label" you would be excused for thinking the series might be as dry as a Saharan water-meadow. But it is not : it is a luscious, informative, entertaining feast. This is partly due to the skills of the main presenter, Neil MacGregor, the Director of the British Museum. It is partly due to the way facts about historical objects are cleverly woven into insights into the contemporary world by guest contributors - whether it be the timeless tragedy of refugees or the way clothes represent deep social and economic trends. And it is partly due to the website which accompanies the project which allows you to see the objects in great detail. But, for me, it is mainly due to those daily 15 minute bite-size pieces. 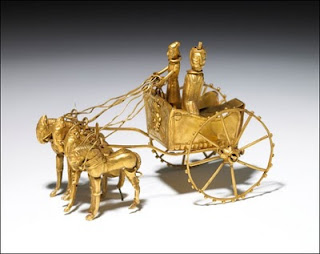 Object 26 : Oxus Chariot Model 600 BC, Central Asia
So far the series is about a quarter of the way through, but the episodes that have already been broadcast are still available to replay on the BBC website, For listeners on the move you can even download the episodes as podcasts and take them with you on your mp3 players and i pods as you walk your dogs or jog your jogs. Museums are normally thought of as being treasure houses, but, in this case, the treasure is the radio series and its wonderfully bitty approach to history.
at February 22, 2010