Gone To Rack And Ruin

We are coming to the end of "Save the British Pub Week" here on News From Nowhere. Today I thought I might share the stories behind three popular pub names as these always provide a fascinating insight into social history. The three names are chosen for no other reason than I wanted to know their origins so decided to try and trace the stories. I have to confess that, of the three, the only one I have ever regularly drunk  in was a "Marquis of Granby" which stood opposite my place of work thirty-odd years ago. 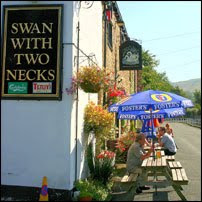 The Swan With Two Necks:
By tradition, the reigning monarch owns all swans in Britain (don't ask me why, it is just one of those quaint/silly British traditions). The only exception to this general rule is that of two London Guilds (the Dyers' Company and the Vintners' Company) who were granted the right to own a limited number of swans back in the 15th century. So people knew whose swans were whose,  swans would be marked with a cut or nick in the lower mandible of the poor creature. Those of the Dyers' Company had one nick, those of the Vintners' had two nicks, whilst the rest were unmarked and belonged to the monarch. The sign of the swan with two nicks became a popular symbol of vintners (wine sellers) and was eventually corrupted into the pub name - The Swan With Two Necks. 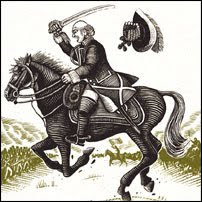 The Marquis Of Granby :
John Manners, the Marquis of Granby, had a successful career as a soldier and later a politician in the eighteenth century. He served as a Colonel in the guards during the Seven Year War and was later promoted to the position of Lieutenant-General. When he left the army he became a politician and served in several of the governments of the mid-eighteenth century. One particular cause he devoted a significant amount of time to was in providing help to disabled ex-soldiers and he funded a scheme which encouraged disabled non-commissioned officers to take up the trade of publicans. It would appear that in grateful thanks, many of those who benefited from the scheme named their inns and taverns after their benefactor. 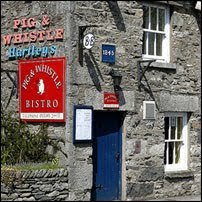 The Pig And Whistle :

There are two theories as to the origin of this particular name. The first is that it is a corruption of two old drinking terms - "peg" and "wassail". A peg was a measure in a drinking vessel designed to ensure that the drinker obtained full and proper measure, whilst "wassail" was a popular drinking salutation (you would raise your glass and say "wassail" and your drinking partner would raise theirs and reply "drinkhail"). Peg and Wessail soon became corrupted into Pig and Whistle. The second theory is that "pig and whistle" was a popular 17th century phrase meaning odds and ends of little consequence. To "to go to pig and whistle" meant to go to rack and ruin.
Come to think of it, Rack and Ruin would be quite a good name for a pub. Wassail all.
at February 19, 2010