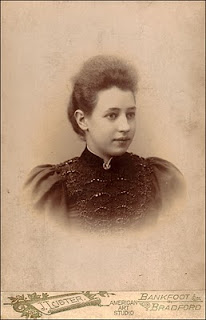 My picture this week is of my maternal grandmother, Kate Kellam. Kate was born in the smallest of the English counties, Rutland in 1877, the second daughter of Albert Kellam and his wife Catherine Moody. For whatever reason, Albert seemed to move around the country with a degree of frequency that was unusual in the nineteenth century. By the beginning of the 1890s he and his wife and their two daughters had a grocers' shop in South Wales. And then, in 1891 at the age of just 38 Albert died. Catherine married again (to a splendidly named gentleman called J. Robinson Thickpenny) and the family's perambulations started again. By the time of the 1901 census, Mr and Mrs Thickpenny were living in Middlesborough, North Yorkshire and their daughter Kate was a live-in waitress at a coffee shop in the same town. Shortly afterwards she found her way to Keighley in West Yorkshire where she was working as a barmaid in the Queens' Head Tavern in Cavandish Street. How she finished up in Keighley is a bit of a mystery but there was some family story about her having been "adopted" by the landlord of the Queens' Head. If so, it would have been a strange adoption as she would have been in her mid-twenties at the time. However she got there, it was in Keighley that she met my grandfather, Albert Beanland, and they were married in either 1902 or 1903. Their first daughter, Amy, was born in 1904 and my mother Gladys followed in 1911. As regular readers of News From Nowhere will know, I have declared this week "Save The British Pub Week".  So at the end of the week it is most appropriate that I celebrate Kate the barmaid in my Sepia Saturday post. Alas, the Queens Head in Keighley is long gone.
For other Sepia Saturday posts go to the Sepia Saturday Blog
at February 20, 2010