Postcard Of The Week : The Language of Flowers 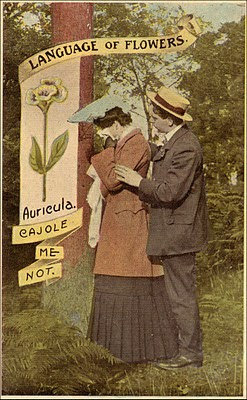 Getting the message across to your over-enthusiastic lover is something that is now achieved by text message or by Facebook status. "bck off u prat" might do the trick or perhaps you could change your Facebook status to "not currently in a relationship". Our Victorians predecessors might not have had access to the wonders of modern technology, but they too had their ways of sending a potent message to the object of ones' affections. During the latter part of the nineteenth century this was by flowers, or to be more exact, by the language of flowers.  Like a perfectly composed text message, each type of flower had a meaning so you could choose your flower and highlight your meaning. Send someone a bunch of Amaryllis and you were complimenting them on their "splendid beauty", Foxgloves implied insincerity and a couple of French Marigolds meant you were as jealous as hell.
It sounds fairly easy and straight forward, but the road to true love has always been subject to the occasional pot hole, and you had to be certain that your beloved was reading from the same code book as you were. According to the rather splendid website "The Language of Flowers", meanings changed over time and you had to be careful that you weren't sending out the wrong message so to speak. If a chap got a bunch of azalea in 1883 it meant "romance" and he could start twirling is moustache in eager anticipation, but if they were delayed in the post until 1892 by then it meant "temperance" so he could put the bottle of Madeira away and go in search of a cold bath.
By the first decade of the twentieth century some of the uncertainty had been taken out of the process by the intervention of new technology - to be precise, the postcard. You could buy a picture postcard with a picture of the flower, which was much easier and cheaper than sourcing a bunch of African Violets. To be doubly sure the postcard would have the correct interpretation printed on it, and to be absolutely certain, it would often have a dramatic little picture to ram home the message. So be warned : don't go around cajoling people without good cause, or you might have a postcard falling through your letter box.
The above postcard is one of several  "Language of Flowers" postcards from the collection of my Uncle Fowler. Published in the "living Picture Series", it dates from about 1903. It has not been postally used.
at February 23, 2010