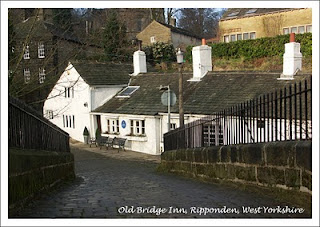 "History runs through the pubs of our land like some giant circulatory system with beer in its veins. They are an integral part of our country's fabric. Pubs have seen it all. Unless you choose mountains, moors or motorways, it is impossible to be more than five miles away from a pub. Want a village pub? Look for a church spire. Want directions? Turn right at the Red Lion and left at the White Hart".

The above words are not mine - I have taken them from an excellent website called "Pubology - Drinking In History" - but however long I had sat down and however many fine beers I had consumed, I doubt if I could have expressed my love of pubs any better. Although beer has always been the fuel that has powered the rise of the great British pub, it is not simply about beer : the delight of a good pub is the way it creates a neutral environment of fellowship based on nothing more than chance encounter. In this, a pub shares many of the attributes of a vibrant blog community.
There is nothing vibrant about the current state of the English public house. Five years ago two pubs a week were closing down in Britain, now the figure has risen to five a day. Pub beer sales have now sunk to the lowest levels since the depression years of the early 1930s. Whilst alcohol consumption has increased, that increase has been driven by cheap supermarket booze consumed either in the isolated silence of the home or the social aggressiveness of the street corner.
There are calls in Britain at the moment for the introduction of minimum prices for alcohol. The proponents of such a policy claim that it would both reduced the alarming amounts of alcohol being consumed at the moment and support pubs which, all things being equal, cannot compete on price with supermarket discounting. It is an argument I have a good deal of sympathy for, but an argument which will probably be lost in this crowd-pleasing election year in the UK.
Some years ago I started a blog - Great Yorkshire Pubs - within which I tried to chart my attempts to visit as many great pubs in my native County as possible before they closed. The current state of closures has encouraged me to merely record as many as I can, even though neither my wallet nor my liver can justify sampling all of them. In the last week I have discovered that two of the local pubs I have frequented on many happy occasions, closed for ever whilst I was away on holiday. It is sad, but it strengthens my resolve to photograph as many as I can before it is too late. And also to call in and sample the fare of at least two or three of them a week. Wish me well in my mission.
at February 15, 2010