Postcards From The Pond 8 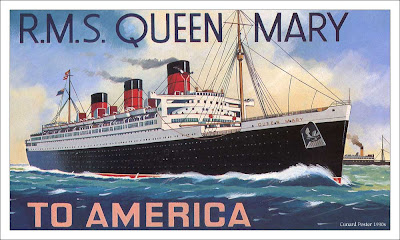 Both the GLW and myself are agreed, Amy would have enjoyed it on this cruise. It’s a pity that P&O’s policy does not extend to welcoming dogs on board (they welcome people with tattoos, after all) as her presence would add a certain something to the experience. She could accompany H on his morning circumnavigations of the boat, and even give E a hand (or maybe a tail) with a little damp dusting. At dinner she could wander from table to linen-clad table, nuzzling her appealing little face up against a satin coated thigh or a regimentally striped leg. She would have been no trouble. But most of all she would have enjoyed sitting on our little balcony and watching the sea. She could have stared for hours at the bobbing of the waves and the ever lengthening ships’ wake, searching for life of any kind.

It is, after all, what we all do. As you walk around the ship you see gatherings of passengers (what, I wonder, is the collective noun for ships’ passengers - a floating of passengers perhaps) in constant search of something to look at. The other day, great excitement was caused by the sight of another ship on the distant horizon. Conversation at dinner that night was especially lively as people who had never spoken to each other before exchanged their thoughts on what colour it might have been, which direction it might have been moving in, and what flag it was flying. Yesterday - and this is the absolute truth - I came across an animated group of men pointing out to sea and training binoculars on a specific spot. The cause of their fascination, I later discovered, was a floating plastic bag (“was it a Tesco bag?. No it will have been American won’t it. It was moving quite fast wasn’t it …..” the conversation continued for much of the morning).

H claims to have seen a flying fish but I wonder if it was some of the waste fried fish from dinner last night been dumped in a mispronounced way from the galley. The big prize goes, of course, to anyone who spots dolphins (80 points) or even a whale (95 points), but as yet the only time I have seen such things is after making my way back from a late night session in the Red Bar. Sightings at such times don’t count I am told. Not that I am wanting to suggest that all this sea scanning means we are bored : we are anything but. It is a life of endless fascination, and a lifestyle I would happily extend given the opportunity.

This morning, the captain’s “Did You Know” feature pointed out in some detail that the ship not only carries a sextant but skilled personnel who can use them to pinpoint the ship’s position at sea to within a mile. The sudden appearance of this particular reassurance makes me wonder whether the captain is reading my blog. Just in case he is, I should point out that my enjoyment of this cruise is almost total, constrained only by the fact that I don’t have a suite of rooms and the services of a butler.